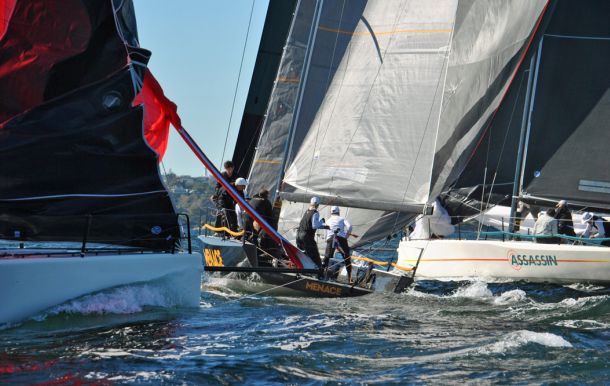 The advice to Andrew Hunn coming in as guest skipper on Leslie Green’s MC38 Ginger for the second stage Autumn Regatta was “just add water”. Given Ginger’s track record, the seasoned steerer but MC38 class blow-in had nothing to worry about predicted coach and peer Mark Bradford.

It’s a squeeze at the top of the one design results this afternoon; two points split the first three, Ginger then Menace and Dark Star, with second and third on equal scores.

“We raced in a pleasant average 12 knot westerly; shifty and lots of snakes and ladders,” said Hunn. “The Ginger crew was switched on. Everyone was in there at some point but the dark grey on black boats are definitely the ones to watch. The class has really tightened up since I last raced an MC38 a couple of years ago. They are a great, fun boat.”

Hunn and his tactician David Chapman flew to Sydney from Hobart this morning, Saturday May 9, 2015, after attending the Royal Yacht Club of Tasmania’s annual prizegiving. At the awards night Hunn handed over the John Calvert-Jones trophy to the RYCT while David received the Martin Graney Memorial Trophy for outstanding mainsheet hand, sailing on the Tasmanian yacht Export Roo which finished second overall in the SB20 nationals in Hobart in March.

The only non-native contesting the five-part MC38 Australian Season Championship, Howard Spencer’s Menace, was a little shaky but managed to salvage some pretty good first day results according to tactician Ray Davies. “It was a very challenging day out there, very shifty and lots of opportunities. We haven’t sailed as a crew since the Pittwater regatta back in February. Our two training days coming into this weekend were really helpful; we are working on a few things and think there are a lot of potential gains to be made. We might step a little backwards before we move forwards,” he added.

“Twenty plus knots tomorrow will be fun; we are looking forward to it,” Davies commented on the forecast for cool autumn westerlies to honk under the Harbour Bridge on day two of the series, thanks to a more vigorous frontal system passing over Victoria and southern New South Wales.

Class President and current third overall placed skipper of Dark Star, John Bacon, explains: “there’s a loose upper class limit of 25 knots consistent. If the weather looks bad we’ll have an owners meeting in the morning and make a decision whether to race.”

The Bureau of Meteorology’s latest Sydney closed waters forecast for Sunday is north-westerly winds 10-15 knots, increasing to 15-25 knots during the morning and reaching 25-30 knots at times in the afternoon. Three more races are scheduled to wrap-up the Autumn Regatta, the first due to fire off at 1000hrs.

Bacon congratulated Andrew Hunn for taking the wheel of an MC38 and straight up finishing boat of the day, and acknowledged the Royal Sydney Yacht Squadron’s sailing manager Chris Stone for recommending a 10am start. The harbour was close to deserted for the fleet’s opening three races, and the fleet enjoyed the best winds of the day. On Dark Star’s performance Bacon added, “we are hangin’ in there.”

The stand-out Corinthian moment was a second over the line for Robin Crawford’s Assassin in the final race.

This evening crews enjoyed a few beers back at the host club thanks to the fourth placed Marcus Blackmore (Hooligan) who shouted the fleet.

Principal Race Officer Rob Ridley reckons his customers were happy. “We gave them a good variety of courses as we tried to get some distance on the harbour, and had a windward finish for the last race right under the clubhouse. We had one general recall, which is unusual for this fleet, and no course changes though the westerlies were shifty.”

Umpires David Tallis and Gary Manuel stayed busy throughout, the first protest coming at the start of race one and the last at the finish of race four.