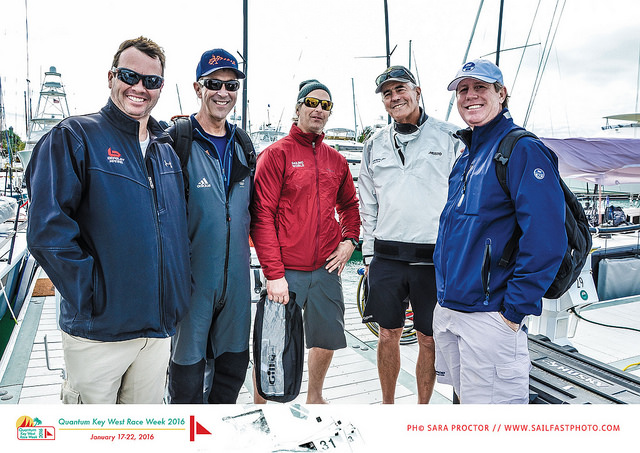 Key West, FL, USA: Yesterday organizers with the Storm Trysail Club knew wind conditions would be on the edge off for today, which is why race committee chairman Dick Neville asked principal race officers on all three divisions to complete three races yesterday at Quantum Key West Race Week 2016.

Sure enough, when today dawned over the Conch Republic it was howling, and it was cold. Locals and tourists alike donned their hats and coats, while Neville met with principal race officers Ken Legler (Division 1), Dave Brennan (Division 2) and Wayne Bretsch (Division 3) to develop a plan.

“The forecast was not promising, so we postponed a decision for one hour, sent some boats out to the race area to determine the exact conditions, and the wind speed was higher than the forecast and building,” Neville said. Northeasterly winds were blowing a steady above 25 knots and routinely gusting to more than 30 knots – producing what Neville politely described as a “nasty sea state.”

“We have a lot of smaller boats in this regatta so we decided not to send them out. We debated about Division 1, but believed it would be tough for them as well,” Neville said. “At the end of the day, we were concerned about gear breakage across the board. It would have been tough on the race committee as well. We also polled some sailor's opinion, and the consensus was that it would be best not to send the boats out today.” Neville and other race officials considered waiting it out to see if the wind dissipated and possibly conducting one race in the afternoon, but ultimately decided not to hold the entire fleet hostage.

“We've heard from sailors over the years from running regattas that the rolling 30-minute postponement is pretty frustrating. Because if you end up abandoning, you haven't been able to do anything constructive,” Neville said. “So we thought we would make the call early today and allow the sailors to enjoy a day off.”

Neville noted the decision to cancel racing for the day was based, in part, on what happened Monday when the 130 boats in 12 classes raced in winds that topped out at 20 knots.

“There were several incidents yesterday on the small boat circles that were borderline dangerous. There were several collisions, multiple gear breakages and man overboard situations – and that was in 20 knots. Sailing in 30 knots is a huge difference,” Neville said.

Down on the docks in front of The Galleon, Rhumb Punch skipper John Edwards breathed a big sigh of relief. Edwards, from the Solomons Island area of Maryland, is chartering a GP 26 sport-boat and is still learning how to handle it.

“I haven't had a heart rate of less than 150 since I got out of bed this morning and saw the mailbox had blown down. So that was the best news I've gotten all day,” Edwards said. “Yesterday was our upper limit. Going out there in 25 or 30 today would not have been much fun. It would have been more survival than sport. I think the race committee did the right thing.”

Division 1 has many professional crews, especially aboard the Maxi 72-footers and the other big boats in IRC 0 and IRC 1. Those teams are accustomed to racing in heavy air and are trained to do so, but did not seem distressed about missing one race on Tuesday. Terry Hutchinson (Harwood, MD), tactician aboard the Maxi 72 Bella Mente, voiced that opinion.

“I think it's the right decision. The race committee is catering to a wide crowd here. They did a great job of getting three races in yesterday and were only going to do one today. With the forecast there's no reason why we can't get back on track by the end of tomorrow,” Hutchinson said. “Believe me, even on our boat there's plenty going on when you're racing in 25-30 knots of breeze. It can get pretty hairy.”

Hutchinson and skipper Hap Fauth (Minneapolis, MN) decided to spend the day ashore and relax. In contrast, skipper Doug DeVos (Ada, MI) and the Quantum Racing crew – current leaders in IRC 1 – elected to take their TP52 out for a practice session on Tuesday morning to help work out any kinks in the breezy conditions.”

“For us there was no reason to do that because we were here training early last week so we have the boat sorted out. There's an element of managing the asset,” Hutchinson said.

Iris Vogel, skipper of the J/88 Deviation, discussed the dilemma facing both the race committee and each individual skipper when deciding whether or not to race in heavy air and high seas.

Vogel, who was hosing off her boat at The Galleon docks, said she would spend the day strolling Duval Street and doing some shopping.

Forecasts are favorable for the remainder of the week and Neville believes the PRO's on all three divisions will succeed in completing a 10-race series. “Based on the forecast for the next three days, we think we can get most of the scheduled racing completed,” he said.

That's all that really matters to Steve Benjamin (Norwalk, CT), skipper of the TP52 Spookie. “I think as long as we get in 10 races all the sailors will be happy,” he said.

Tomorrow's forecast is for the breeze to abate to be sailable conditions, with the first race signals scheduled to start at 11:30 EST.

Complete results, photos from Max Ranchi and Sara Proctor, and videos from T2P.TV are available on the event website at www.keywestraceweek.com.