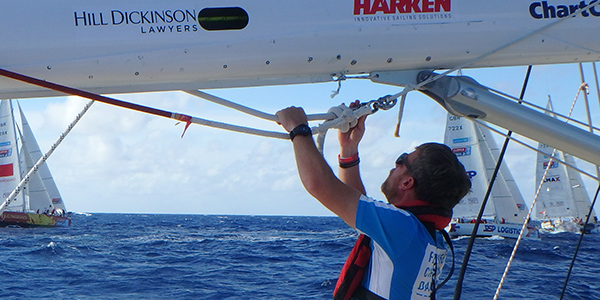 The first 24 hours of the Da Nang New Discovery of Asia Race 7 has seen the teams split as they navigate the tactics of the Lihou Reef, with the option of going to seaward of it, or between two reefs.

After a Le Mans start early Tuesday local time, the teams hoisted their spinnakers for a time before the wind backed and started to lighten.

Qingdao is the current race leader, with a 3.75 nautical mile lead over IchorCoal in second, followed by Unicef in third 8.5 nautical miles behind. All three teams are on the west of the course.

Bob Beggs, Skipper of Qingdao, described the first 24 hours of racing: “After a cracking start under spinnaker yesterday, we dropped the kite in favour of our Yankee headsails. We then saw the fleet split in favour of individual tactics. Our aim was to transit between two reefs directly ahead rather than go the long way around. This has shown some initial gains but all the yachts are still reasonably close by.

“The wind ahead is getting lighter by the hour as expected. As we close up to the Inter Tropical Convergence Zone (ITCZ) (otherwise known as the Doldrums) good helming and sail trim are essential. The team is focused effectively on deck trying to get an extra knot of boat speed, although pilot whales slapping the side of the hull did cause some distraction for a while,” Bob added.

“Today has seen some more strange wind patterns as there have been some heavy squall clouds around. At one stage we had Mission Performance sailing off into the distance, Visit Seattle screaming up behind, with us stuck in the middle making 1 knot of boat speed in hardly any breeze at all. Such is the way of ocean racing.

“The team experienced its first tropical squall today with the big wind shifts, big gusts, and the most discernible characteristic – the torrential rain, or as I like to call it, 'the shower’. The on-watch did a great job dealing with the rapidly changeable conditions. There will be plenty more to come I am sure,” Matt added.

Simon Rowell, the Clipper Race Meteorologist, said that the wind, albeit patchy in places, should last for the next 36-48 hours, enough to get the teams into the ITCZ.