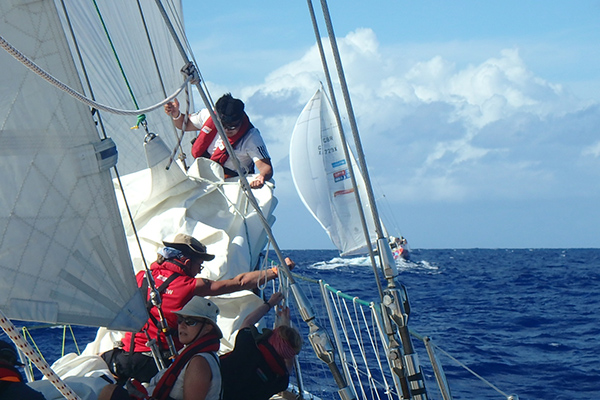 The teams have been contending with tropical squalls and patchy wind as they close in on the Doldrums in the Da Nang New Discovery of Asia Race. And the next crucial tactical decision soon awaits, with the teams needing to decide whether to go left, straight through or right in the Solomon Sea, with a windless hole in the middle currently forecast.

Qingdao is still at the head of the fleet, now followed by Garmin in second and Derry~Londonderry~Doire in third*. However, the competition is as hot as the temperature, with the first eight boats within 12 nautical miles of each other.

Dan Smith, Skipper of Derry~Londonderry~Doire, described the intensity of the last 24 hours.

“The tight grouping of us, LMAX Exchange, GREAT Britain, Da Nang – Viet Nam and Garmin, and a settled moderate breeze, led to a fantastic night’s sailing under a bright moon and finally hundreds of stars once the moon dropped beneath the horizon.

“Five yachts all within sight of each other kept the crew working hard to maintain the pace. The tight sailing continued through the morning until we made a move and hoisted our spinnaker when a 10 degree windshift finally made flying it an option.

“As we closed the gap on Garmin, up went its spinnaker as well. GREAT Britain and LMAX Exchange are continuing to sail closer to the wind for a better angle later. The wind will decide who has made the best choice,” Dan added.

Max Stunell, Skipper of PSP Logistics, in ninth, said the wind gods had been favourable to the eastern pack and allowed those yachts to sneak around the reef without tacking.

“Unfortunately this means we have slotted into a space about 10 nautical miles behind them having been fairly hard on the wind for the last 24 hours to counter some foul sub-tropical current,” Max said.

“With just over 100 nM to the first waypoint, there should be a bear away and possibly a kite hoist to take us through the Solomon Sea. The wind looks to get progressively lighter as we continue north into the Doldrums. With the fleet so tightly grouped, it is likely to get very interesting. Eight out of 11 boats are currently on our Automatic Identification System (AIS) and there is still over 3500 nautical miles to go.”

How will the teams cope with the lightening winds? What tactics will the fleet choose for transiting the Solomon Sea?