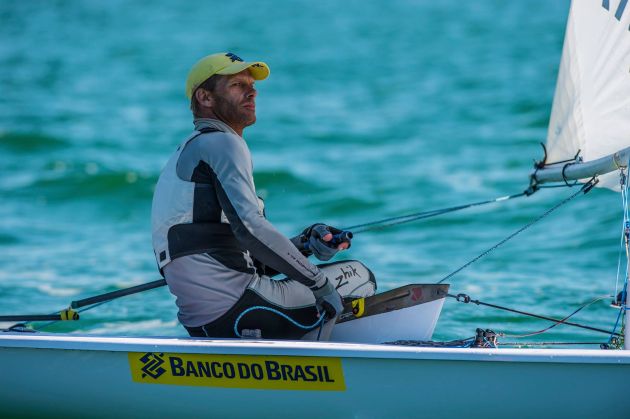 Robert Scheidt will be a major drawcard for Brazilian fans in Rio. Photo World Sailing.

In 200 days 380 sailors will be set-up at the Marina da Gloria in Rio de Janeiro, Brazil, finalising their preparations for the greatest sporting spectacle, the Olympic Games. On August 5 the Rio 2016 Olympic flame will be lit, signalling the start of 17 days of sport.

For sailors to get to an Olympic Games they have to play their cards right, qualify their country, qualify themselves and fine tune their physique and boats so they're fully optimised for the stresses and strains an Olympic Sailing Competition provides.
In order to do exactly that, sailors go through the Sailing World Cup series and over 780 sailors will be using the first shuffle of 2016 in Miami, USA to deal a killer blow to their rivals in the Olympic year.

London 2012 gold medallists, World Champions and Rio 2016 medal hopefuls will be among the starters aiming for glory in the ten Olympic and two Paralympic events on show in Miami from 25 to 30 January 2016.

A World Cup podium position is not the only thing at stake in Miami. As a Rio 2016 Continental Qualification regatta for North and South America, several nations will be vying for an Olympic berth. One spot in each of the fleets for both continents will be up for grabs with two available in the Men's RS:X.

The Laser Radial fleet will be the one to watch in Miami with a special trio facing off in the 80-boat fleet. London 2012 gold medallist Lijia Xu (CHN) will be joined by silver medallist Marit Bouwmeester (NED) and bronze medallist Evi Van Acker (BEL).

Alongside Ireland's Annalise Murphy, Xu, Bouwmeester and Van Acker had a famous four way battle for gold at London 2012 with the Chinese racer coming out on top. Xu stepped away from the Laser Radial in 2013 but after a two-year hiatus she returned to Olympic sailing at the 2015 Laser Radial World Championship.

The rivalry with Bouwmeester and Van Acker resumed instantly as she finished sixth to their second and third. With more miles and training in the bag, Xu, who stole the hearts of the sailing world in 2012 will be aiming to make an impression in Miami.

Denmark's Anne Marie Rindom continues to excite in the Laser Radial and returns to Miami to defend the title she won 12 months ago. Rindom also comes into the American World Cup regatta off the back of a world championship victory last year and will be aiming for the medals once again.

Much like the Radial, the Laser fleet will feature many of the leading lights of sailing and is set to be a hot contest.

Racing is set to commence at 10:00 local time on Monday 25 January across the ten Olympic and two Paralympic fleets. Medal Races on Saturday 30 January will bring Sailing World Cup Miami to a close with the races to be broadcast live on the World Sailing TV YouTube Channel – www.youtube.com/worldsailingtv