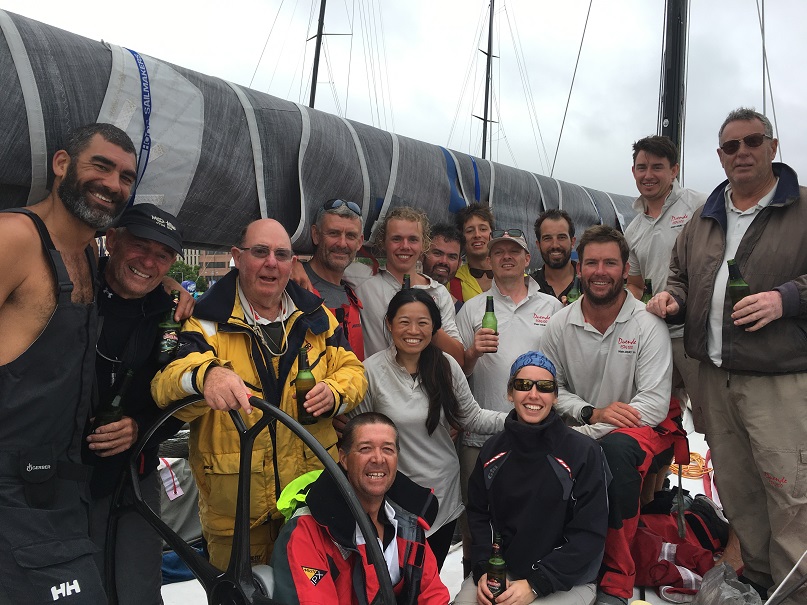 The 2016 Rolex Sydney Hobart Yacht Race has provided Tony Cable with two line honours, an overall victory, lifetime membership of the Cruising Yacht Club of Australia – and a wife.

It’s not bad for a short, fat, bald bloke who notched up a record 51st start in the Cruising Yacht Club of Australia’s iconic race aboard Duende. It’s more than any other sailor.

Cable first entered the race as an 18-year-old teenager in 1961, and was a young man completely taken with the sport and the thrill of ocean racing. It’s a love affair that has seen him return to one of the world’s most gruelling ocean races a further 50 times since his first crossing of Bass Strait. It’s nearly as many as the race has been running – 72 years.

“I keep coming back because I like the sport. I live close to the yacht club and been involved for many years. I never thought for one moment that I wanted to do the Hobart race 51 times.

“To me, I like sailing and particularly the ocean racing arm of it. I started at 18, but a year or two before I’d been sailing in the ocean and all the races out of Sydney. I kept on getting berths with various crews and it is very enjoyable.”

Cable’s teenage years have long surpassed him and a 52nd Hobart is still in question, but the relationship with his crewmates is as strong as ever…Even if he was born closer to the creation of television than that of the iPhone.

“There’s no privileges on this boat (Duende), we’re all good mates and we have a good time together,” he smiles. The young blokes like to have a shot at me and I tell them to pull their socks up – it’s banter all the way.

“Whether I come back again remains to be seen, I’m not retiring but I might like to spend some time with my wife!”

Although he jokes that this race allows he and wife Ada to have a reprieve from each other year on year, Cable fondly recalls their first encounter was on the eve of the 1967 Sydney Hobart. He adds that Ada knew what she was getting into from the very beginning.

“When I first took her out, we went sailing before the 1967 Sydney Hobart, I better get that date right! We had a picnic after we’d finished up at the boat in a nice sunny bay on a Sunday.

“Her first time on the water was on a pre-Hobart boat, so she could never complain that she didn’t know about it. She had a choice then and she didn’t take up the opportunity to give the whole thing away.

“Funnily the boat was named ‘Fare Thee Well’. It would have been a great time for her to say ‘Goodbye Tony and fare thee well!’

With a wife that was happy to let her husband sail off over the horizon each December, Cable recalls line honours in 1981 aboard Vengeance and a line honours and overall victory with Sovereign in 1987 as the highlights of his 51 starts.

“From a statistics standpoint, 1981 and 1987 were highlights. Over the years I have come first, second, third and fourth on handicap. So if I had to give it away I would say that I had a bit of luck on my coat.”

While his crew will most likely enjoy a night celebrating inside the preferred watering holes of weary sailors in Hobart, Cable is hoping for a more docile end to this year’s campaign.

“I’m going to go and see the gardens tomorrow morning and in the afternoon the opera.”

He may not have confirmed his attendance in the 2017 race yet, but there is little doubt that the short, fat, bald man, otherwise known as ‘Glark Cable’ will sail again.