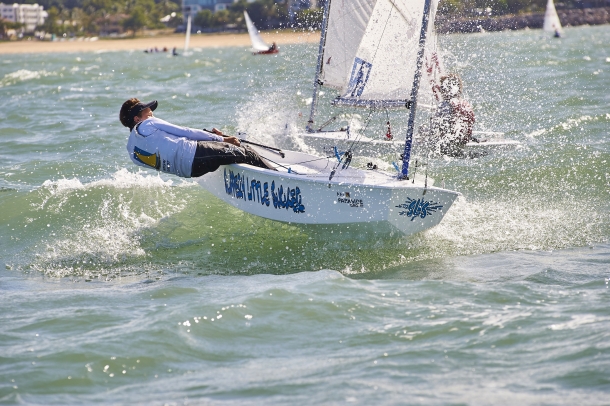 Over the recent Christmas New Year period 120 sailors hit the warm Townsville waters, in North Queensland, for the 51st Sabot Nationals and John Byrne Sabot Week, run by Townsville Sailing Club through the efforts of Club Commodore Jim Barsi and his great team of volunteers.

The regatta experienced light morning airs for the Sabot week races with building sea breezes for the majority of the afternoon Nationals racing. A couple of rain squalls later in the week bought a bit of excitement to spectators and sailors alike as nearby Magnetic Island vanished in a rain squall and then the entire fleet disappeared, soon to reappear onshore with lots of smiling sailors who enjoyed the quick run back to the club.
The 120 sailors travelled from Tasmania, Northern and Southern NSW and Southern Qld to join the local North Qld’s, noting some of the “locals” still had 5 hours to travel to make it to Townsville.

The open Nationals regatta saw 70 senior sailors compete in one of the most competitive regattas in a number of years, with the PRO, judges and race support team kept on their toes throughout the week by both competitors and changing weather conditions.
Three sailors took it down to the last day and after a week of very close racing Tom Stivano, Slippery Little Sucker from Northern NSW, took out the Senior Nationals title by one point from Henry Larkings, Viper from Southern NSW, with William Wallace, Loose Cannon from Tasmania, only seven points further back in third place. Stivano’s extra few days on the water in the lead up to the regatta looked the telling difference.

Full results can be found through visiting the Sabot webpage at www.sabot.com.au

Sabot Week had 26 sailors hit the water, with a large number in their very first regatta. This was a great turnout, with a number of NSW sailing families making the long trip for this great event, in developing our young sailors of the future.

In the all-important teams event the Southern Qld’s better handling of the local conditions saw them prevail over Tasmanian and then Southern NSW.

Another great Sabot regatta with our up and coming sailors heading off to their next engagements with a large group of familiar Sabot faces turning out for the Flying 11 Nationals in Brisbane, where a number of current and past Sabot sailors fought it out across the fleet.

And quickly, attention turns to next year’s event where Northern NSW will host the 52nd Sabot Nationals titles, at the Wangi Wangi Sailing Club on Lake Macquarie.