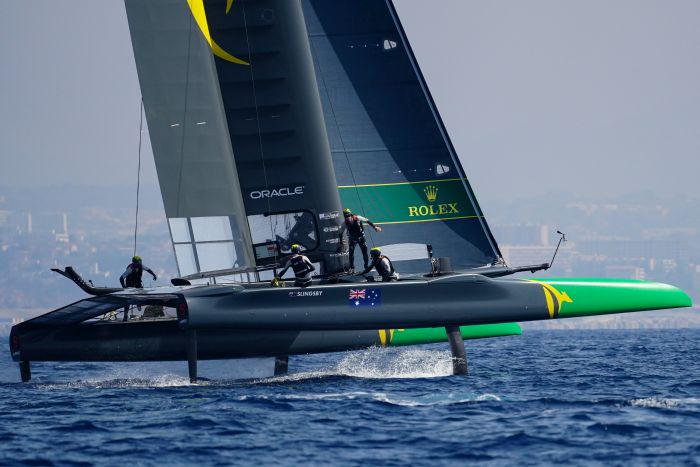 MARSEILLE, FRANCE -September 17, 2019-  Tom Slingsby and the Australia SailGP Team’s revolutionary F50, emblazoned with a giant kangaroo, set sail for the first time today in the Mediterranean port of Marseille, ahead of the final event of SailGP Season 1 on 20-22 of September.

“You couldn't ask for a more beautiful backdrop to sail, with the crystal clear water and   enjoyable 30 degree weather. Unfortunately today we didn’t have a huge amount of wind but we were able to get some foiling in, we are hoping that the winds will pick up for us come race day.”

The team’s first practice session delivered a glimpse of what to expect when Australia takes on the five other nations at Marseille, which will conclude with a show stopping $1 million, winner-take-all match race between the top two teams to determine the season champion. The season winner will also take home the striking SailGP trophy – commissioned by world-renowned trophy maker Thomas Lyte.

Currently Slingsby and the Aussies are leading the charge at the top of the leaderboard after a stunning victory at Cowes SailGP, where the team blitzed the six other nations competing and delivered a hat trick with consecutive wins in all three races on the Solent.

The Aussies will however still have to fight off strong competition from fellow Olympic gold medallist Nathan Outteridge of Japan who is just four points behind, Rome Kirby’s young United States team and the British team helmed by Dylan Fletcher.

“The past four events of this first season have been leading us to this moment, the final event here in Marseille. We know Nathan and team Japan are going to come back strong and with a fire in their belly following Cowes. It will come down to the final match race and we’ve got to ensure that as a team we are mentally and physically prepared to give it our all. It would pretty special for us to make history as the first champions of this new sailing league and return home with the trophy in hand.”

Sailing fans based in France can enjoy the history making event for free at the official SailGP Fan Zone or those wishing to get closer to the action can purchase tickets to the viewing platform located on the Seawall or on one of the spectator boats, which deliver unrivalled views of the races.

Fans based in Australia can follow the action from Marseille SailGP on the SailGP APP and on official broadcasters Fox Sports and Kayo Sports.