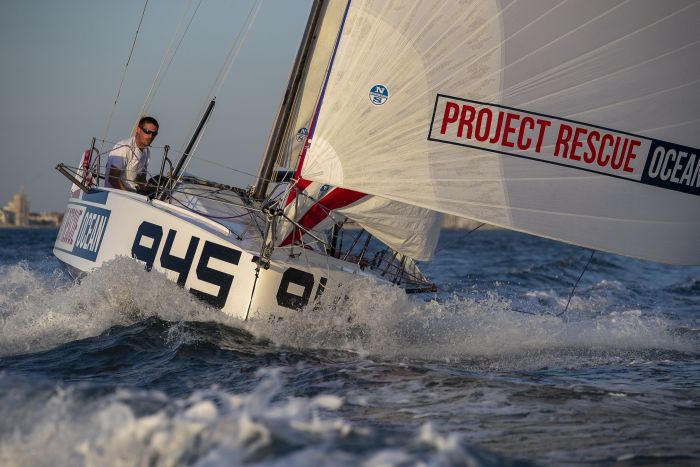 Among the 87 sailors competing in the Mini-Transat La Boulangère 2019, 22 are competing in the prototype category. Though four sailors stand out as firm favourites (François Jambou, Axel Tréhin, Erwan Le Méné and Tanguy Bouroullec), there are also some solid outsiders and skippers sailing on ‘vintage’ prototypes.

The Mini 6.50 is available as both a production boat, built in over ten copies, and a prototype, the majority of which are unique. Essentially, the main difference between a prototype and a production Mini is that the former is allowed to use carbon, have a canting keel, daggerboards (or foils) and a bigger mast. The 22 prototypes signed up for the Mini-Transat La Boulangère are very varied, ranging from the 260 skippered by David Kremer, launched some 20 years ago, to Tanguy Bouroullec’s (the 969) brand spanking new foiler.

Four favourites: three mates in their thirties and one ‘youngster’

Axel Tréhin, François Jambou, Erwan Le Méné and Tanguy Bouroullec: without getting ahead of ourselves, we can hedge our bets on the fact that, barring successive damage, the winner of the Mini-Transat 2019 in the prototype category will be one of these four sailors. All of them are ‘repeat offenders’ but they have boats from different generations with different philosophies, which will make for thrilling viewing.

Three of them, Jambou, Tréhin and Le Méné have all won races contested in the Atlantic in 2018 and 2019. They are also three close friends, with a relationship based on respect, mutual aid, sharing and also rivalry (on the water).

“I live with François in La Rochelle before the start and two years ago I was able to repair my boat under Axel’s guidance,” explains Erwan Le Méné (800). “Of course, I want to finish in front of them. If I’m beaten by one of them, that would mean that they’ve put in more effort than me, plain and simple, end of.” François Jambou, who sails aboard the reigning champion of the prototype category (the 865), shares this fine mindset: “I make no secret of the fact that I’m targeting victory. I hope we’ll have a proper battle on an equal footing, not as a result of technical issues.”

Already in the zone, Axel Tréhin (945) is getting a bit of distance but he too freely gives up his time to his rivals. “The Mini-Transat is a real epic. Lots of things can happen, a lot of things will happen. It’s not necessarily the fastest boat that wins, or the best sailor. All the planets just need to be aligned.”

With his stunning foiler (the 969), Tanguy Bouroullec, 25 years of age, clearly has the means to get in the mix, even though he hasn’t racked up as many miles as his direct rivals. “Despite her age, the boat is polished. The main criteria has been to design a versatile foiler, capable of working in all kinds of conditions, at all kinds of points of sail. I have the opportunity to do something good in this Mini-Transat,” explains Tanguy.

“Yes, there will be a four-way match. However it would be a mistake not to take into account the other competitors, who might be able to pull something out of the bag. Psychologically, the situation is more comfortable for them. They have good boats and feel less pressure as there’s less expectation,” François Jambou warns.

So, who are the outsiders? Among them are Marie Gendron (930) and Jonathan Chodkiewiez (958), who have Verdier-design prototypes, which are remarkably well built. We should also count on Vincent Lancien, who sails an iconic Mini 6.50 (the 679), which has already taken the start of the Mini-Transat six times but remains competitive, together with Fabio Muzzolini (716).

With regards to the international contingent, it will be worth keeping an eye on Matteo Sericano (888), Pole Michal Adam Weselak and German Morten Bogacki (934).

Signed up on the second foiler in the fleet (the 900), Raphaël Lutard could well pull a blinder in certain conditions. “My boat is very stylish. She and I behave well in strong downwind conditions. However, if it’s light upwind, we’re going to suffer,” admits Raphaël.

They’re signed up on ‘vintage’ prototypes

Certain skippers are setting sail aboard slightly dated prototypes, though they are still great machines, like that of David Kremer (260), Luca Rosetti (342), Pep Costa (431) and Nicolas Tobo (392). The latter has one of the smallest budgets in the fleet (prototype and production boats combined) and christened his 2002 Mini 6.50 “Soyouz”, in relation to her age among other things. “The space capsule of the same name is old, but is still responsible for transporting the astronauts between the Earth and the ISS. Let’s hope that the reliability of one transfers across to the other,” says Nicolas. “I hope to finish the course without too many difficulties and, in terms of score, that I end up in the top half of the fleet. That would be a victory in itself!”