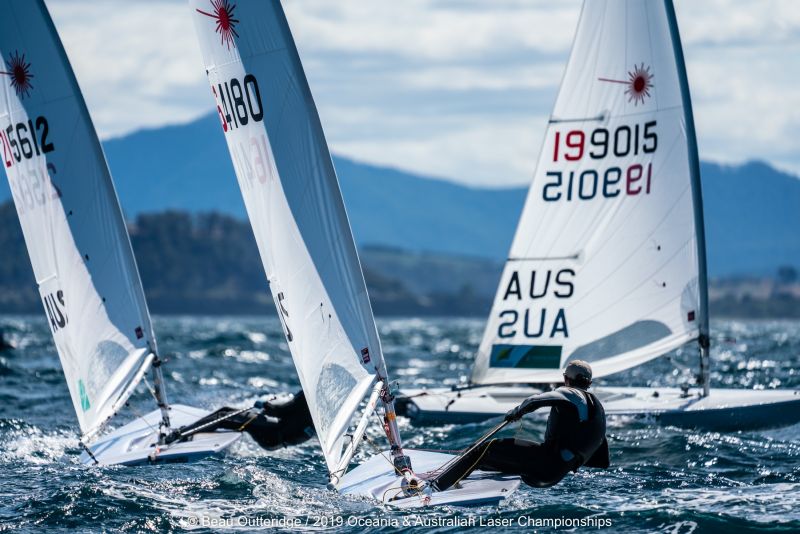 Laser racing will dominate the calendar in the state of Victoria during Australia's summer. Seven major Laser regattas will be held, with many sailors expected to line up in more than one event.

The busy three months kicks off on January 1, 2020, when the Australian Laser Championships will be held at Sandringham Yacht Club. The championships cover all rigs and already organisers have received 140 entries.

The Australian Sailing Team has confirmed that its men's and women's Laser squads will compete and entries are also being received from overseas sailors who are hoping to learn the local wind patterns ahead of the World Championships at the same venue.

To download the Notice of Race and to enter the Australian Championships, go to https://www.auslasernationals.com.au/2020-australian-laser-championships/.

The Australian titles will be followed by the Oceania Laser Championships which will be held as part of the annual Sail Melbourne regatta. Although the multi-class event will officially be sailed from Royal Brighton Yacht Club, the Lasers will launch from Sandringham. Lasers currently dominate Sail Melbourne entries, with the start list already including eight internationals.

Major dredging work is currently being carried out at Sandringham by the Victorian State Government, which will provide a sandy foreshore from which to launch off-the-beach dinghies.

The highlight of the busy summer will no doubt be the ILCA World Championships for both Standard and Radial rigs, which will also be sailed at Sandringham Yacht Club.

The Standard Men's World Championship will be held from February 9 to 16 and will feature all of the world's top sailors as they prepare for the 2020 Olympic Games in Tokyo. With Australian's Matt Wearn and Tom Burton currently first and second in the World Sailing rankings, there will be a lot of local media interest in this event.

This is a restricted entry allocated championship. Sailors wanting to enter must first complete an application form, accessible at https://sailing.laserinternational.org/site/event-site/109. Total entry for this event is limited to 160 sailors.

A week after the men do battle in the Standard rig championship, it will be the turn of the Radial sailors, both men and women. Over the past two Olympiads, the Laser Women's event has been the most closely contested of all sailing classes, so competition is likely to be fierce as the leading sailors strive to establish superiority over their rivals leading into Tokyo.

The Laser Radial Women's World Championship takes place at Sandrignham from February 21 to 28. Like the Men's class, this is a restricted entry event with a limit of 140 sailors. Applications can be made at https://sailing.laserinternational.org/site/event-site/110.

To be sailed concurrently with the Women's event, the Laser Radial Men's Championship is also restricted to 140 boats and applications can be made at https://sailing.laserinternational.org/site/event-site/111.

Among the entries in the Laser events above are likely to be some “old timers” who will use the Australian Open Championships and Sail Melbourne to tune up for a busy month of Masters Laser sailing in March at Geelong, on Corio Bay, which is on the opposite side of Port Phillip from Sandringham.

As indicated in the opening paragraphs, the NORs have been released for both Masters events and already places are filling fast.

To encourage early entry in the Oceania and Australian Masters, the organising committee has offered a prize of two new Laser sails, for the rig of the winners' choice. All entries received before midnight on November 30 go into the draw, which will be held at 8pm on March 14 at the Welcome Party. There is one prize for Australian entrants and one for overseas visitors.

Australian Laser manufacturer, PSA, will almost double production in 2019 to cater for the expected demand. PSA Managing Director, Chris Caldecoat, says that the company is fully committed to supporting all the events and will be shipping boats to Victoria in 40ft containers. For more information on charter options, go to https://www.psasailing.com.au/or email info@psasailing.com.au.

As Australia's second-largest city, Melbourne offers a variety of accommodation options for anyone attending the championships from interstate or overseas. To receive information on accommodation options, go tohttps://www.laser2020.com/schedule-01 and select the regatta of interest.

With such a huge program, and with many sailors wanting to enter more than one event, the organisers have gone to great lengths to make all event information easily available. Sailors have two options to access NORs, entry forms, charter boat and accommodation materials.

A dedicated website has been established at www.laser2020.com, where you can also download a free smartphone App developed specifically for these regattas. It is available for IOS and Android and already there have been over 900 downloads, indicating the interest the Laser Summer of Sailing is generating.

The App provides links to all race documents, weather, tides, regatta programs, maps, entry lists and local business guides and will be a great way to access results when the events are underway.

All seven regattas will be conducted while observing the objects of the World Sailing Environmental Objectives, including engagement with local environmental groups.

Volunteer training is also underway through the local sailing clubs, who are promising a Laser summer that will never be forgotten.

The Laser Summer of Sailing in Australia is made possible with the support of the Victorian Government Major Event Fund, administered by Visit Victoria (#visitmelbourne); by Australian Laser manufacturer Performance Sailcraft Australia; and with local support from Bayside Council and the City of Greater Geelong.