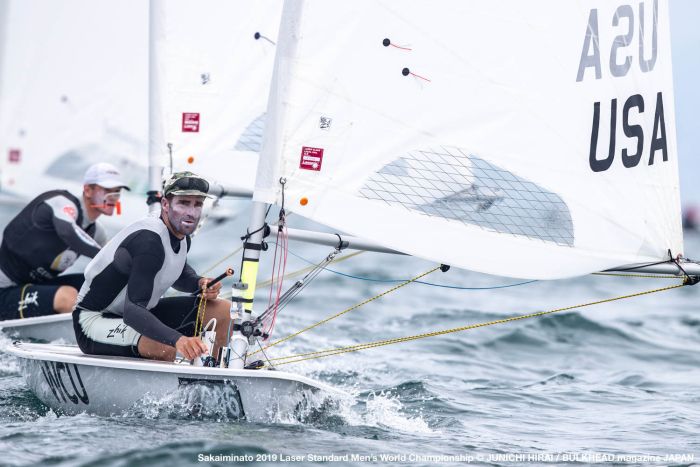 With little wind across Miho Bay, sailors were held on shore to start
the day, waiting for conditions to improve. The forecasts did not
look promising, but shortly after noon a nice 9-knot northeast breeze
filled and allowed the three fleets to complete the two scheduled
finals series races. The races were completed quickly as, amazingly,
all three fleets got away on their first starting attempt for both
races.

In the first Gold Fleet race, Germany’s Nik Willim showed good pace
both upwind and downwind to take first place and earn life-long
bragging rights to having won a race in the Gold Fleet at a Laser
World Championship. In the early part of the race, Willim battled
Ireland’s Ewan McMahon for the lead, but as it turns out, McMahon was
disqualified for being over the starting line early. The consistent
form of Jean-Baptiste Bernaz once again allowed him to move to through
the fleet to secure a second place finish ahead of USA’s Charlie
Buckingham in third. Kaarle Tapper finished fourth in what turned out
to be an excellent day for the young sailor from Finland.

The wind held steady at around 9 knots for the start of the day’s
second Gold Fleet race. Australia’s Matt Wearn, who had posted a 30th
place finish (his discard score) in the day’s first race found some
vindication to take the win. Wearn led at the first mark and then
extended his lead to finish comfortably in front, nearly two minutes
ahead of the next finisher. With a clean start and near perfect upwind
tactics, Buckingham capped off an exceptional day of sailing to take
second place behind Wearn. Combined with his third place finish in the
previous race, Buckingham won the day and moved up to forth place
overall from 17th where he started day, and now sits just three points
out of second. Tapper again showed great form to finish third, and
similarly made a big move up the leaderboard from 20th place yesterday
to ninth place today. Bernaz sailed to an 11th place finish, a score
that was good enough to move him into second place overall in the
championship.

With the final two races scheduled for tomorrow, Burton sits in a
comfortable position – as much as leading a world championship can be
comfortable – and with a 13th place discard in the final series, he
looks to need only one more top-ten finish tomorrow to claim the world
title. But with only 15 points separating second from tenth place
overall, the battle for the remaining podium spots will be much
tighter.

In parallel with the battle for the podium, a second battle is
occurring as sailors work to secure one of five available berths for
their respective countries to send a representative to the 2020 Tokyo
Olympics. Although he fell out of the top-ten today, in 15th place
Jesper Stalheim is in a good position to secure Sweden a spot in the
2020 games. Hungary in 16th and Argentina in 17th are also well placed
at the moment. Rounding out the current top-five qualifying countries
are Russia and Guatemala in 20th and 21st places respectively. But
consistent finishes are proving hard to come by in the competitive
Gold Fleet and the standing could certainly change after two more
races.