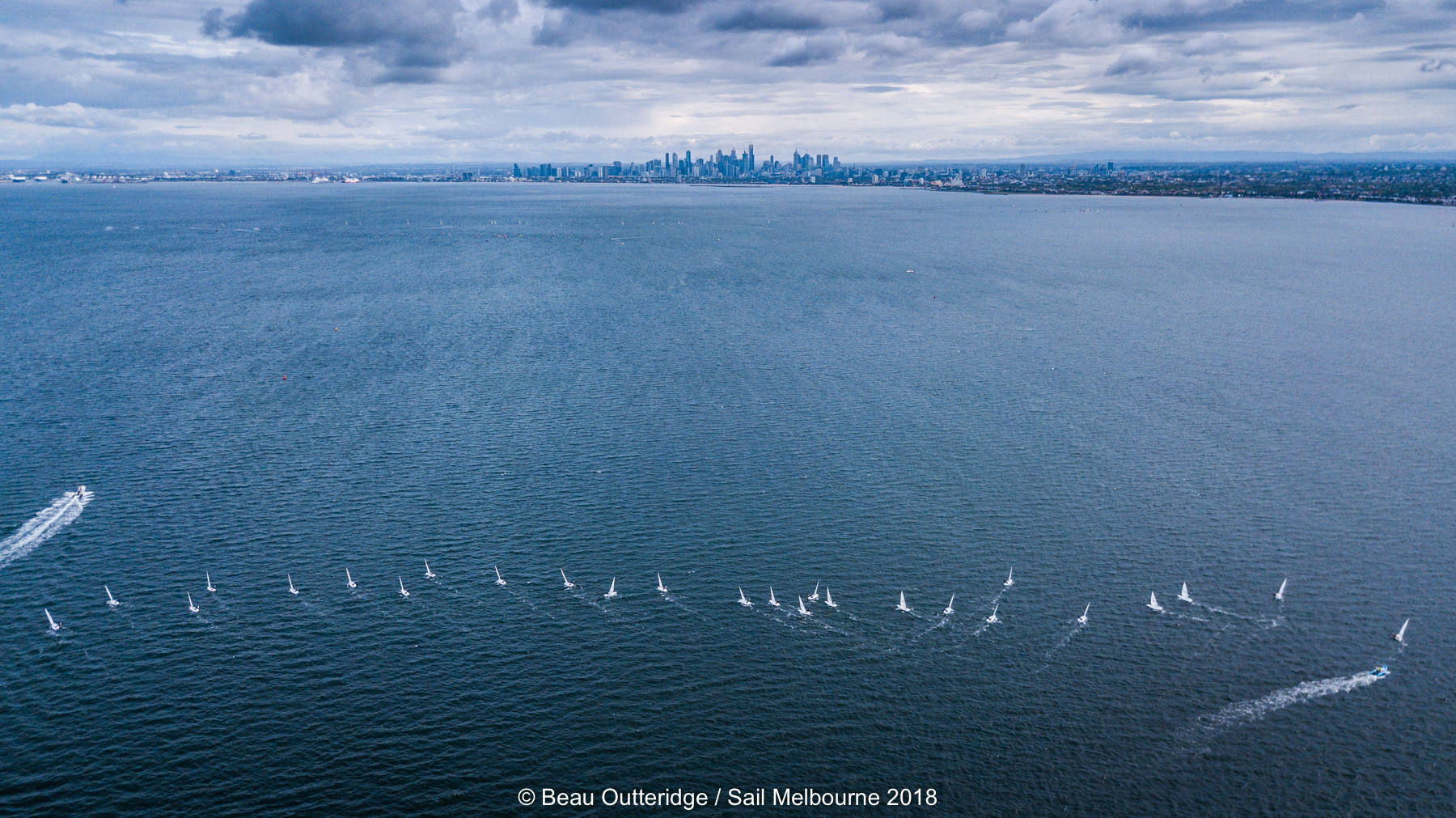 The world’s attention will be on Melbourne this summer with the world’s best sailors heading down under for the Melbourne – Summer of Sailing.

Six months out from the Tokyo 2020 Olympic Games, Melbourne’s Port Phillip Bay from Sorrento all the way around to Geelong will come to life with a series of Olympic class sailing events over the entire summer, including six World Championships (December 2019 – March 2020).

In the lead-up to the Tokyo 2020 Olympic Games, Melbourne will be the place to be for all those aspiring for Tokyo gold, but also all those others wanting to come and escape the long cold northern hemisphere winter either as a bucket list sailing destination or to maximise their training for Tokyo.

The Melbourne Summer of Sailing is expected to be the largest of gatherings of Olympic and international sailors ever in Melbourne with over 2,000 participants plus more than 2,500 affiliates expected to visit Victoria.

The 2019 Finn Gold Cup, the world championships of the Olympic Finn class, will kick off the series of Olympic class sailing events on Port Phillip with the regatta also the last opportunity for Australia to secure a spot for the Tokyo 2020 Games.

Sail Melbourne International (SMI) is open to all Olympic sailing classes and sailors from around the world contesting the 2020 Summer of Sailing are expected to attend to make the most of Australia’s summer in preparation for the 2020 Olympic sailing season.

For 2020 SMI will also be acting as the Oceania Region Olympic qualifier for as the 470 Men and Women well as the Oceania Laser Championships. Sail Melbourne’s Youth Classes will be incorporate into theAustralian Youth Championships from the 10 -14 January, 2020 at Sorrento Sailing Couta Boat Club.

3.     2020 Sail Melbourne International. 17-21 January 2020 at Royal Brighton YC and Sandringham YC – Australia’s premier annual Olympic and Youth classes sailing regattas and the largest of its type in the southern hemisphere.  Held annually since 1992 the SMI has put Melbourne on the annual Olympic Circuit and considered by World Sailing as one of the key “Majors” around the world.  For 2020 SMI will also be acting as the Oceania Region Olympic qualifier for some classes as well as the Oceania Laser Championships:http://www.sailmelbourne.com.au

4.     2020 ILCA Standard Men’s World Championships. 9-16 February 2020 at Sandringham Yacht Club – The Laser Standard is the athletic light weight men’s single-handed boat of the Olympics sailing in over 120 countries.  It is the most universal of all of the Olympic Classes, with Australia having won gold at both the London and Rio Olympic Games. https://www.laser2020.com/

5.     2020 ILCA Radial Women’s World Championships. 21-28 February 2020 at Sandringham Yacht Club – The Laser radial is the sister class to the Laser men’s and the female single-handed boat at the Olympic Games.  The best female sailors from around the world will converge on Sandringham for both selection and preparation for the Tokyo Olympic Games. https://www.laser2020.com/

6.     2020 ILCA Radial Men’s World Championships. 21-28 February 2020 at Sandringham Yacht Club – Although not an Olympic discipline the Radial men’s uses the same boat and sail as the Olympic Radial women’s and is predominantly the youth / boys single handed boat used throughout the world, with those sailors then transitioning to the larger Olympic Standard rig. https://www.laser2020.com/

7.     2020 49er World Championships (men). 10 – 15 February 2020 at Royal Geelong Yacht Club– The 49er skiff is Australian designed and first introduced to the Olympic games as the high-performance skiff for the 2000 Sydney Olympic Games. It is the spectacular, fats and athletic men’s two-person skiff.  Australia has a great chance in this event, after winning gold at London 2012 and silver at Rio 2016. https://www.rgyc.com.au/on-water/regattas/2020-49er-49erfx-nacra-world-championship/

8.     2020 49erFX World Championships (women). 10 – 15 February 2020 at Royal Geelong Yacht Club – Held at the same time as the 49er men’s World Championing the FX is the female two-person high performance skiff introduced to the Olympics for the first time in 2016. This class provides high speed spectacular racing on the flat waters of Corio Bay. https://www.rgyc.com.au/on-water/regattas/2020-49er-49erfx-nacra-world-championship/

9.    2020 Nacra17 World Championships (mixed). 10 – 15 February 2020 at Royal Geelong Yacht Club – The Nacra17 was introduced to the 2016 Rio Olympic Games as the first missed gender class where men and women sail together. Since Rio the class has further evolved to be fully foiling thus being the fastest of the Olympic Classes foiling above the waters.  Australia again will be a favourite in this class with current silver medallists from Rio returning for Tokyo. See event website HERE.

10.  2020 ILCA Laser Masers World Championships. 19 – 28 March 2020 at Royal Geelong Yacht Club – To close out on the summer of sailing is one of the largest events being the Master’s Laser Worlds. Sailed in the same boats as the Olympic Laser divisions this regatta is for the non-professional / non-full-time sailors.  With over 300 sailors descending on Geelong this event is equal parts fun and comradery as well as on water competition, but a once in a lifetime holiday for many of the sailors. https://www.laser2020.com/

In addition to these ten pinnacle Melbourne Summer of Sailing events there will be over 21 supporting events taking place around the bay over the whole summer. These include Oceania and National Championships in many of the Olympic, youth and junior classes as well as practice and world championship warm-up events.

For more information on the 2020 Summer of Sailing see the website here: www.summerofsailing.org.au

Melbourne’s Summer of Sailing 2020 is proudly supported by the Victorian State Government.

The world’s best Olympic sailors will be heading down under at the end of the year to contest the 2019 Finn Gold Cup, the World Championship for the Olympic Finn Class.

The 64thFinn Gold Cup will run from 13 to 21 December 2019 out of Royal Brighton Yacht Club in Melbourne, Australia and will be the penultimate World Championship and the Olympic Oceania qualifier ahead of the 2020 Tokyo Olympic Games.

Entries are now open and the notice of race can be found HERE.

The 2020 Australian Laser Championships will also run under the Sail Melbourne 2020 Summer of Sailing umbrella and will be the first of seven major Laser events to be held in Victoria, Australia, between January and March 2020.

To enter and for more information go to https://www.auslasernationals.com.au/

Sail Melbourne International (SMI) will run from 17 – 21 January 2020 for the Olympic and Invited Classes as the inaugural leg of the new Asia Pacific Circuit at Royal Brighton Yacht Club (RBYC). Entries are now open and the notice of race can be accessed HERE.

Sail Melbourne International is Australia’s premier Olympic and Invited Classes Regatta, held annually in the waters of Port Phillip, Victoria. Established in 1992, it has become the largest annual ‘Off the Beach’ regatta in the southern hemisphere and is critical to the growth and success of junior and youth sailors, enabling them to race alongside their Olympic heroes.

SMI is a World Sailing 100-point event and many world-class sailors are expected to contest the event as a follow-up or lead-in event to Melbourne’s Summer of Sailing national and world championships and to make the most of the southern hemisphere summer racing and training opportunities.

For more information head to sailmelbourne.com.au

The 2020 Australian Youth Championships will be hosted by Sorrento Sailing Couta Boat Club from January 10 – 14, after the class nationals, as part of the Melbourne Summer of Sailing.

The championship attracts the best youth sailors from around Australia and competition is notoriously tough as competitors are selected to attend the Youth Worlds.

The timing of the back-to-back events will provide the perfect opportunity for sailors to compete in several regattas with entries for the 2020 Australian Youth Championship now open.

See the Notice of Race HERE

For more information about Melbourne Summer of Sailing visit http://www.summerofsailing.org.au