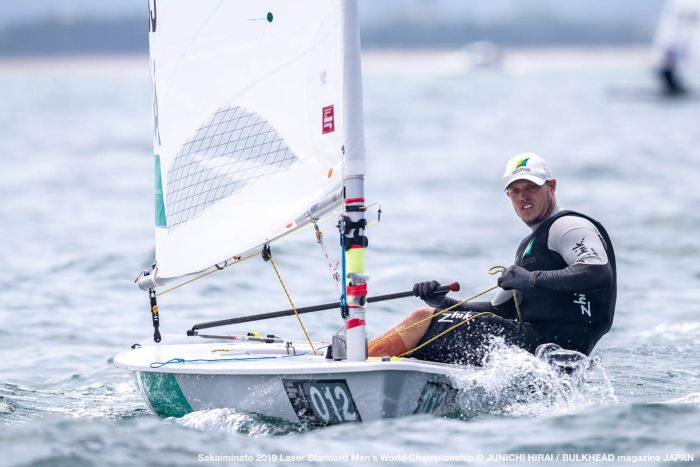 Australia’s reigning Olympic Laser champion Tom Burton won the Laser Worlds in Miho, Japan late this afternoon, while Matt Wearn’s sterling performance in the final two races has earned the West Australian second overall; a satisfying result for Australia and the Australian Sailing Team (AST) with the Tokyo 2020 Olympics little more than a year away.

Burton did not have the best day with 14th and 51st places in the final two races. However, going into the day, he held an 18-point buffer over his nearest rival and was 20 points clear of Wearn, who was sitting in third place. Burton, from Sydney, also carried an affordable race drop of 14th, which was replaced with today’s 51st.

It meant a win by four points for Burton over his team mate. Wearn, who won the Laser European Championship in late May, sailed consistently to sixth and fifth places in the final two races to end the Worlds in second place.

On winning, Burton said: “I don’t think it’s sunk in yet. Not the best final day for me, but it didn’t have to be in the end,” the relieved athlete said referring to his 51st in the final race.

“It’s pretty difficult to make big comebacks in the Gold fleet – I made one in the first race though. I was 40th and came back to 14th. I’ve watched others do that, and I finally I managed to do it, which is why I held on in the end,” he said.

“In the last race, at the last minute, I was working on a nice gap at the start near Matt, but a guy stuffed my start up completely. That wasn’t great; a bad time to happen. I knew I needed to get a better result, but it didn’t happen. Fortunately, I had a good enough break on the rest to carry me through to win.”

Burton went on to explain, “Championships are long events and consistency pays more than winning races, so being pretty consistent all week helped me.”

“Matt is always there keeping me honest and vice versa,” Burton said. “Is it a pressure situation? Yes and no,” Burton said. “Obviously Matt jumped me last time (at the Laser Europeans). I unravelled on the last day and he won.

“We have different strengths and weaknesses and learn from each other. It’s a great way for Australia to finish; top two. And it’s nice to share it with a fellow Australian. We want to show how dominant Australia is in the class – which it has been for around the last 10 years.

“I’m fortunate that I’ve won an Olympic gold medal already and I wanted to win a Worlds. I’ve come very close a couple of times, but it’s fallen apart at the last minute. It nearly happened again today, but I was able to pull through. It a great feeling to hang on and finish it off,” an elated Burton ended.

For Matt Wearn, there was nothing wrong with second place: “At the start of the day, Tom had a pretty handy lead on the rest of us. It was close from second to 13th places. I was in third coming in, so second was a plausible goal, but it was a pretty hard order to win in the conditions today. Conditions were like they were all week; puffy, lots of gains and losses to make and lose. You feel you’re in the hunt and then you’re down the pack,” he said.

Wearn had Olympic medallists and past world and European champions breathing down his neck going into the day, but he did not falter.

“You go out there and sail like you usually do and try and win the race; you don’t think about the others. This Worlds was more cut throat than usual though. People were willing to push the limits more because of Olympic selection, and the pressure is higher, so it does feel like a bit of a battle field. It was good to be consistent again though,” Wearn said.

“For sure you know you have to win the regatta to beat the other guy in the overall scheme of things for Olympic selection. You know if you do get selected, you have a good shot at Gold when you consistently finish at the top. There were 10 or 15 guys capable of winning a world championship here and that makes it harder.”

Mitch Kennedy was next best placed of the AST in 35th overall, although 40th and 37th places today were not his best results. Luke Elliott climbed up the board to 38th overall, courtesy of fifth and 30th places on the final day, while Finn Alexander finished 44th overall, despite looking good early on in the final two races.

Australia has long had an abundance of talent in the Laser class, resulting in top results on the world and Olympic stage. Australian Olympic selectors have been spoilt for choice and have had to make difficult decisions through past Olympic cycles. Selection for Tokyo will be no different.

This Laser team is fortunate to be coached by Michael Blackburn, a former world champion in the class and double Olympian with a bronze medal from the Sydney 2000 Games. Blackburn coached Tom Slingsby to Laser Gold at the 2012 Olympics and Tom Burton to his Olympic gold medal at Rio. His background and coaching skills hold the team in good stead.