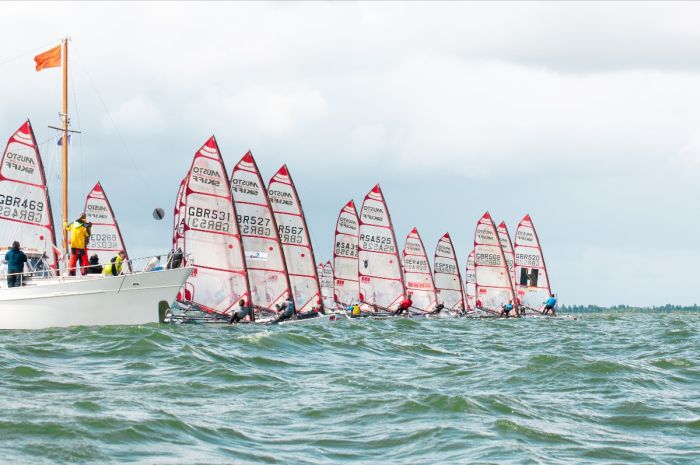 After three races on the spectacular opening day of the ACO 10th MUSTO Skiff World Championship 2019, British sailor Bruce Keen has taken the lead. The world champion of 2012 and 2015 has a lead of four points over his compatriot Dan Vincent, who stands on equal points with the Dutchman Paul Dijkstra. Thanks to winning the second race of the day, Vincent is in second place. The challenging conditions on the IJsselmeer off the coast of Medemblik put the 92 participants to the test.

“Yeah, I capsized too,” says Bruce Keen afterwards. “My genaker was flogging for a moment. When the sail filled up again, the boat bore away very quickly but my body went straight ahead, that was me swimming. Luckily the mast stayed above the water and I was able to move on quickly.” Nevertheless Keen squeezed out a good score of 3-8-1. The strong wind, which at the end of the day even tapped the twenty knots (5 Beaufort), and the typical short IJsselmeer chop made for a natural selection among the sailors.

In the huge fleet of almost a hundred boats there are many Olympic sailors, champions and top sailors from other classes. For these seasoned sportsmen en -women, the conditions can't be rough enough. But in the back of the field, participants have to pull out all the stops to keep this spectacular skiff under control. Throughout the race day there is a constant stream of boats coming back to the Regattacenter. Some with irreparable damage, some participants are just too tired after countless capsizes. Others come in just to untangle a gennaker and head back to the racetrack as soon as possible.

Of course all eyes are on the current world champion Jon Newman from Australia. But even champions sometimes have their hands full with the MUSTO Skiff. “Just before the first start I was stuck in a mood. I kept capsizing and couldn't get to the starting line in time.” Newman had to settle for twentieth place in that race. Only in the third race he could play a role in the leading group. With his boat just on the hard, he is still full of excitement because of his battle with Bruce Keen. “In the last tack he came in front of me. But I only thought 'hold on, hold on' in the strong wind. Really big fun that downwind sailing!”

A Dutchman Paul Dijkstra was one of the sailors who produced an astonishingly good series on this first day. “Yes, during the practice race the day before yesterday I finished second, but that doesn't say anything about today”, Paul tells us on the morning before the races. With a tenth and two times a third place he now occupies the third place in the general classification. “I went incredible fast today. Amazing. This was really beautiful. That last race, when a squall came over, there was so much wind – no one has control over his boat. That's fantastic! That's what I do it for. I had a huge gap with the number four behind me. Actually, the only thing I thought was: 'If I keep that mast up in the air, I can make it third'. But even that wasn’t so easy”, says an over-enthusiastic Dijkstra.

Further progress in the World Cup

The event lasts until Saturday 13 July. For the whole week there are three races per day with a layday on Thursday and two final races on Saturday. According to expectations, the wind will be less strong for the rest of the week.