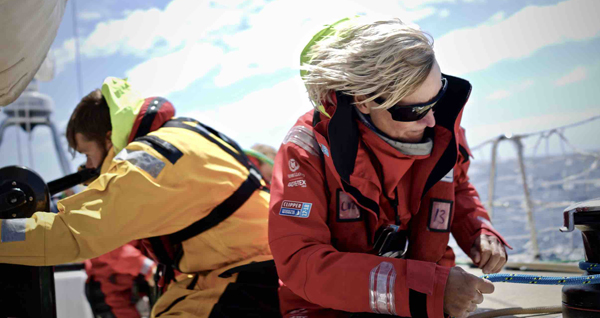 The Elliot Brown Ocean Sprint is in full swing on day 5 of Race 4: The ClipperTelemed+ Tasman Test, and the racing remains as close as ever.

Qingdao has continued its incredible rise in the rankings, with the team now in in the lead, despite sitting in last place just three days ago. But with just 32 nautical miles separating first from seventh, Qingdao Skipper Chris Kobusch says: “Since the start of the Elliot Brown Ocean Sprint, we really have been sprinting.

“It is absolute champagne sailing and with Garmin and Visit Seattle in AIS range, everyone is on their toes trying to make the boat go as fast as possible. The last three position reports were great for us, indicating we had top average speeds within the fleet over the past 18 hours.

“But Sanya Serenity Coast, Visit Seattle, and Garmin are all within 10 nautical miles of us, so it is as close as ever.”

Visit Seattle remains in second place for the third consecutive day and just like her Qingdao counterpart, Skipper Nikki Henderson is keeping a watchful eye on the competition as the eastern gate of the Elliot Brown Ocean Sprint draws closer, reporting: “This is definitely the closest sprinting we have ever done.

“I'd like to say it will be a relief when the Elliot Brown Ocean Sprint is over, but the reality is that we will continue sprinting all the way to our next waypoint 'Mitchell' down the bottom of Tazzi and then onwards as it's likely we will all sail together all the way there.

“This is testing sailing – but super fun and rewarding for the crew too.”

Garmin remains in third place, but Sanya Serenity Coast is just one nautical mile behind, after falling from first to fourth overnight. The conditions though are suiting Sydney Skipper Wendy Tuck, who comments: “We got a kite up again today as the wind finally backed enough to allow it.”

A tear in the Code 2 Spinnaker saw the fifth placed Unicef lose some ground on Sanya Serenity Coast, though the team led by Bob Beggs still has small buffer of 12 nautical miles on HotelPlanner.com and GREAT Britain, who are neck and neck, locked in a tight battle for sixth. HotelPlanner.com, who won the Elliot Brown Ocean Sprint in Race 3, currently has the edge by less than one nautical mile, and Skipper Conall Morrison says: “The wind has veered around from southwest to west bringing warmer and more stable air with it.

“Our Elliot Brown Ocean Sprinting strategy is working well so far, but we see from position reports that Sanya Serenity Coast and the boats further north are moving well also, and the ice-hunters on PSP Logistics look fast too.”

Liverpool 2018 is still in eighth and is under white sails after damaging its Code 3 Spinnaker. Despite the setback, Liverpool 2018 remains in front of Dare To Lead, who is waiting for the conditions to shift, as Skipper Dale Smyth explains: “We had a quick night under white sails and then this morning, the wind dropped and veered sufficiently to start flying spinnakers again.

“The wind has got quite light and we are making best progress until it picks up with the next frontal wave. We are not making the best course or speed for an Elliot Brown Ocean Sprint, but we are well more than half way across to Tasmania and the weather continues to look favourable.”

Nasdaq is right on Dare To Lead’s heels in tenth, whilst PSP Logistics remains in eleventh place. PSP Logistics is persisting with the southerly route, though Skipper Matt Mitchell is starting to doubt his decision, saying: “We've had a set back over the last few hours, with the breeze easing and veering ahead of a front that is due to pass over us later today.

“This is costing us hard won miles against the fleet as well as meaning our Elliot Brown Ocean Sprint is turning into a bit of an ocean meander. Such is ocean racing though and when the wind does fill in, it should do so with a vengeance meaning more high boat speeds.

“We are only hoping that as we are closer to the centre of the low to the south, we will have more wind than those to the north meaning we should get back some of those miles.”

In welcome news for PSP Logistics and the rest of the fleet, Clipper Race Meteorologist Simon Rowell has positive tidings on day 5, reporting: “It’s all looking pretty good for the next few days, and the fleet will be in solid breeze, though not anything monstrous, as the teams go over the relatively shallow squeeze point for current round the bottom of Tasmania.”

Stay tuned to the Clipper Race Viewer, with its hourly position updates, to see how the changing weather conditions will affect the fleet. All positions were correct at time of publishing.

to read the Skipper Blogs in full, or to hear the latest from the crew, visit the Team Pages.