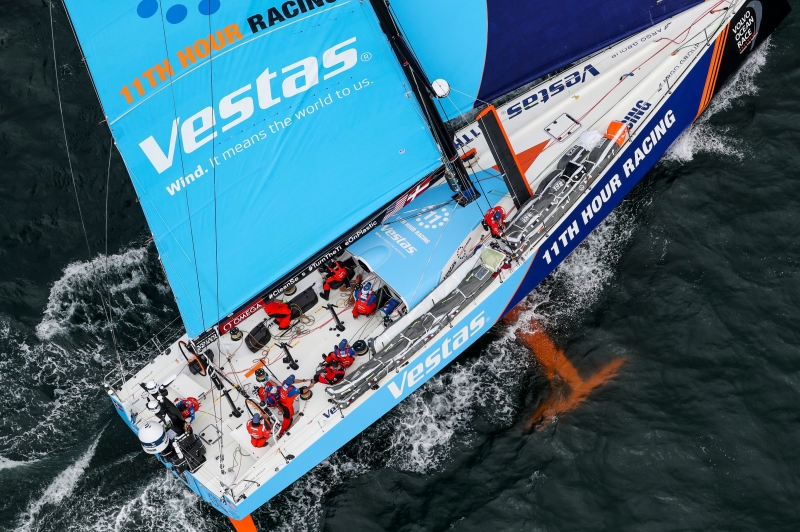 Overall Volvo Ocean Race leader MAPFRE was at the head of the fleet off the starting line as the boats raced up Melbourne's Port Phillip Bay immediately after the start for Leg 4 to Hong Kong. But it was a very close run affair, and four hours after the start, as the fleet battled a heavy sea state to clear the narrow entrance to the Bay, it was Vestas 11th Hour Racing leading the charge, with the Spanish boat close behind in second place and Team Brunel a tight third.

Leg 4 is a 6,000 nautical mile race up the east coast of Australia, into the Coral Sea and up north to Hong Kong, marking the first time the Volvo Ocean Race has visited the historic port.

Shortly after the leg start, the wind increased from 10 to near 20 knots with MAPFRE leading Vestas 11th Hour Racing, Team Brunel, Turn the Tide on Plastic and Dongfeng Race Team out towards the right hand side.

Meanwhile, team AkzoNobel and SHK/Scallywag split hard from the others towards the left. Early indications showed a slight advantage to MAPFRE with skipper Xabi Fernández initially in a favourable position after tacking back towards the turning mark near Mornington.

But Scallywag, perhaps benefitting from the local knowledge of Australian skipper David Witt and new crew member Grant Wharington, and Vestas 11th Hour Racing had soon joined the battle for the lead.

The Scallywags fell back at the turning mark however, leaving Vestas 11 Hour Racing, MAPFRE and Team Brunel neck and neck at the front. Dongfeng, recovering well after completing a penalty turn on the start line, were in fourth place.

For Vestas 11th Hour Racing it makes for an ideal start for new skipper Mark Towill, who has stepped into the role as a replacement on Leg 4 for Charlie Enright, who returned home to tend to a family medical emergency. For Towill and crew, the winners of Leg 1, this is an opportunity to put some pressure on race leader MAPFRE.

“This leg is very difficult and there will be a lot of options open,” Fernández said just before leading his team off the dock.

“We will be pushing the boat hard from the very beginning to move forward… The boat and crew is in good shape, we’ve had a good rest and we’re ready to go again.”

The fleet faced challenging conditions exiting the Bay, with the strong incoming southerly wind opposing the outgoing tide and whipping up a short, steep seaway.

But after the exit into Bass Strait, the teams were able to turn left and head east, in fast reaching conditions for their first night at sea.

The ETA for Hong Kong will be more certain after the boats clear the Doldrums but is pencilled in for January 20/21.