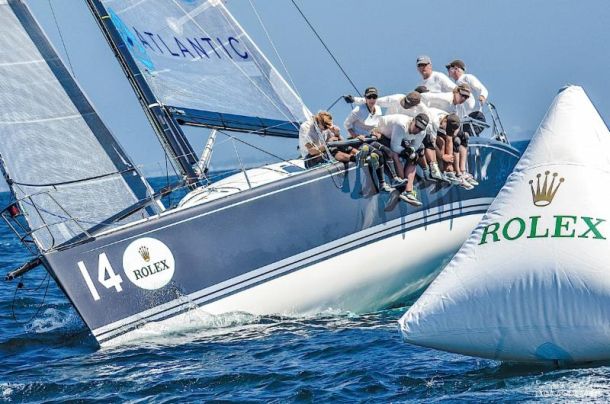 Estate Master’s results do by no means reflect the closeness of racing. “It is incredibly close, which is what you expect when you have 17 yachts with 17 of the best tacticians in the world,” said the Sydney sailor who competes in other equally difficult classes, such as the Etchells.

Once again, the day started with a light breeze and flat seas. In Race 7, the first of the day, Estate Master rounded the top mark the second time in fourth place, and finished in the same place. In slightly increased winds in Race 8, the Australian team fell to 10th.

Hill explained: “Weed was our downfall again – on our rudder and keel. It wasn’t only us that suffered, but it is very frustrating, especially after our good start. We had to fight hard for every place after that,” he said.

Race 9 started and the breeze remained light, but built to 9-10 knots, The Estate Master crew regrouped, and in an amazingly close first top mark rounding, the lone Australian entry was in sixth place, but moved up one to finish fifth.

“Once you are anywhere from fifth place down, you are buried – stuck in the traffic – and that is grand prix racing… but that’s what’s great about it.”

Hill, who is representing Middle Harbour Yacht Club and Royal Sydney Yacht Squadron, commented ashore: “We’re happy with where we are. A bit of bad luck has kept us out.”

On the conditions in Long Beach: “We knew what we were coming to, but prefer 12-14 knots with a bit of chop, that’s the conditions at home. It’s very challenging sailing here, and we have learned a lot, which we’ll bring home with us to Sydney when we train for the next Worlds to be held off Sydney Heads.”

Hill realises the top three may be out of reach at these Worlds. He and the crew are targeting fourth place. Dissimilar to the majority of other classes which recognise the top three, the Farr 40 class rewards the top four.

“Fourth place is realistic. Two races are scheduled for tomorrow. We have to have two good ones, and that’s what we’re aiming for,” Hill confirmed. “Performance-wise, that’s where we fit.”

Defending world champion, Plenty (Alex Roepers), has protected her lead, but Groovederci (John Demourkas) has lifted to second and is on equal 38 points with her fellow American entry. Struntje light (Wolfgang Schaefer, GER) has moved up to third on 43 points. Estate Master is on 57 points, within striking distance of the fourth and fifth placed boats.

The 2015 Rolex Farr 40 World Championship concludes tomorrow, with racing due to commence shortly after midday. Only two races remain to complete the 11-race series, so all is on the line for the Australians.

Estate Master is one of 17 boats from six nations entered for the Rolex Farr 40 Worlds and Pre-Worlds which are being hosted by the Long Beach Yacht Club.