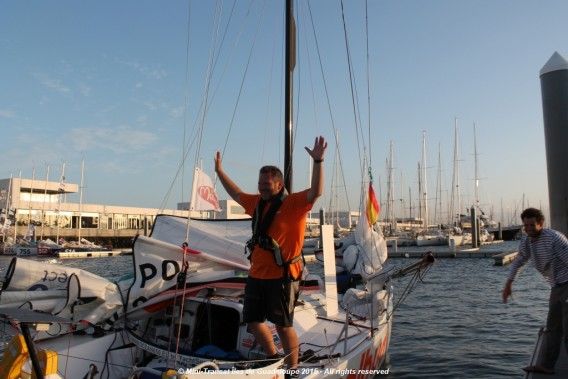 They arrived  in flurries in the port of Arrecife  on the western coast of the island of Lanzarote. Little by little, the Mini-ists  moored their monohulls alongside those of their friends. It was a chance to go over the course, to chat and to  relax. At this moment,  the word ‘rivalry’  is only a word.

There’s a  ritual on the pontoons of Lanzarote marina.  As each competitor arrives, the pontoons resonate with the sound of  charming music, and the adversaries who have already arrived leave the Mini mess area, and  come to welcome their mates. They help them with heir hawsers, give them a hand to roll up the sails, and to welcome those with whom they have done battle, with a high five or with a big kiss on the cheeks. In the Mini-ists community, they don’t hold back.

In the arriving group, there are obviously some who have lived through some challenging times.  Some of the those trailing in late have suffered technical damage, made mistakes in choices of routes, perhaps suffered never-ending sea-sickness.  Among the range of cards that were dealt, Hervé Aubry (IXINA – Voilerie HSD)  fell victim to the  buffer zone  created by the north-wst wind in front of cap Finisterre.  The result for him was more than eight hours of sailing at very slow speeds while the  majority of the group greedily ate up the miles towards the finish.

Others didn’t find a good rhythm immediately , such as Dimitri Simons (teamsolo.nl)  who fell victim to a terrible sea-sickness that lay him out flat for  two days, or the Portuguese sailor, Antonio Fontes (Vela Solidaria)  who was forced to stay awake all hours while moving at death-defying speeds.  In the prototype, Michele Zambelli (Illumia) and Alberto Bona (onlinesim.it) paid very dearly for losing time in the Gulf of Gascony. Lastly, Benoît Hantzperg (YCA Dhumeaux Secours Populaire), without his  damaged rudder that forced him to make a technical stop in Cascais, can still legitimately set his sights on a place on the podium, given his victory in the series boat in this first stage.

The adventure is enough

There’s no question about it. Already, the simple fact of having arrived in Lanzarote is some sort of victory.  Victory  over the fate that afflicted Nikki Curwen (Go Ape ! Live Life Adventurously)  in 2013, when she couldn’t get any further than top of the waiting list for the race, or Clément Bouyssou (Le Bon Agent ! Bougeons l’Immobilier) and Julien Pulvé (Novintiss), who were stuck in a long technical stop in Lanzarote before re-joining the race.

Also, the cohort of all of those starting out for the first time are measuring the time it has taken from the very first moment they decided to enter the adventure, and their arrival in the Canaries. For Radoslaw Kowalczyk (Calbud), the simple fact of carrying out the project in his  prototype- which will be made in series afterwards- is enough to warrant his expressive and enthusiastic happiness on the pontoons of Lanzarote. For Henri Marcelet (Région Nord Pas de Calais), Arnaud Marchado(Du Léman à l’Océan) and Yann Claverie (Map Product), the running battle in the race between these three bandits spiced up their days so much that they didn’t notice the time passing.

What the sailors said :
Dimitri Simon (Teamsolo.nl – 20th place,  Series): “The two first days, I was ill, I had sea-sickness. All of a sudden, I just couldn’t sail properly. I couldn’t eat, and I became really weak. The last five nights when it got a bit warmer, sailing with the big spinnaker, it was wonderful. The further south I came, the better it was.”
Andrea Fornaro (Sideral – 13th place,  Series): “It was a fantastic regata ! Meravigliosa !! The waves, the wind, everything was magical, and it was a real pleasure!  I am very, very happy ! My boat is in perfect condition, I haven’t broken anything at all, apart from a little rip in the main sail.  There is a just one little thing I still haven’t understood : how was it , coming out of the Gulf of Gascony?”  (He laughs.)

Radek Kowalczyk ( Calbud – 13th place,  prototypes): “I am alive ! At least….more or less…(he laughs) It was really complicated and intense, I had loads of little  technical problems  on the boat. The last part of crossing the Gulf of Gascony was really difficult. After that, it got better. I am more or less happy with my result, and at the same time, I am really happy just to be here !. I could have done better, but that’s life ! I’ve got a lot to learn about my boat, to make it go faster, and I need to optomise some of the set-up, but nothing too major.”