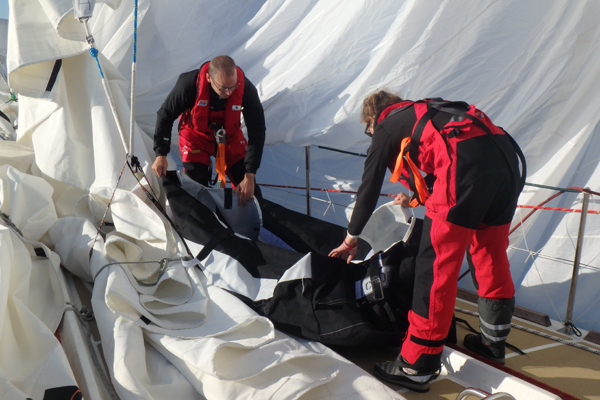 Despite there being seven boats still racing, it has been an anxious 24 hours for Clipper Race followers with up to four teams opting to activate Stealth Mode over the same period. This is a tactical rule introduced by the Race Office which allows each yacht to become ‘invisible’ to the rest of the fleet and the Race Viewer for a period of up to 24 hours in Race 1 and sometimes 48 hours in longer legs.

Clipper Telemed+ was the first to re-emerge on the Race Viewer at 0005UTC this morning and as of 0800UTC, is 164 nautical miles from the finish line in Rio de Janeiro. The aim for Skipper Diane Reid and her team was to close in on its nearest rival Visit Seattle, which lay in sixth before it too opted to activate Stealth Mode.

Skipper Diane Reid is happy with the progress Clipper Telemed+ made, saying: “Breeze is up, the heavyweight spinnaker is up and so is the hair on the back of my neck! We are trying to squeeze every little bit of speed out of ClipperTelemed+ that we can! With less than 300 nautical miles to the finish line, we are seizing the moment as hard as we, ClipperTelemed+, can… even if it means that we are driving her like we stole her! Did I mention that it's blowing 25 to 30 knots out here!”

ClipperTelemed+ will know if it managed to achieve its goal of overtaking Visit Seattle and moving into sixth place, the highest possible finish now, when the American-sponsored entry comes out of Stealth Mode at 1200UTC.

Visit Seattle Skipper Huw Fernie is not giving much away about its position but is expecting a tight finish. He said: “Like many of the boats before us we have had a good ride down this section of the coastline and the wind and waves give us a final little push as we go. Next stop (maybe literally) will be Cabo Frio. Here we have to tread a fine line between the land inshore and the oil fields offshore. It will make for a tricky night and hopefully some memorable moments.

“We'll move in fits and starts towards Rio as we see what we can all do to keep Visit Seattle at least pointing in the right direction. With a bit less wind we are all due to bunch up as well, so just before the finish things could get interesting once again. We might even see our old sparring partner PSP Logistics again.”

PSP Logistics has some ground to make up if it is to renew its battle with Visit Seattle. As of 0800UTC it is 323 nautical miles from Race Finish. However, given the unpredictability of the winds around the cape, conditions could work in its favour and Skipper Max Stunell has also requested to activate Stealth Mode at 1200UTC today.

He says: “The miles tick down increasingly slowly the closer you get it seems. By my calculations we could be in by the early hours of Thursday morning. At least that was until I looked at the weather again and it turns out the GRIBS show a big fat zero of wind around Rio.

“Let’s hope these are wrong and the localized effects turn on. As I type this we are in shorts and t-shirts, surfing at 15 knots plus under an almost full moon which in my eyes is perfect sailing, skilled and rewarding.”

All of the teams are now within 600 nautical miles of the finish line and expected to reach Rio by Friday 2 October. To stay up to date on the latest ETAs (estimated time of arrivals), click here.