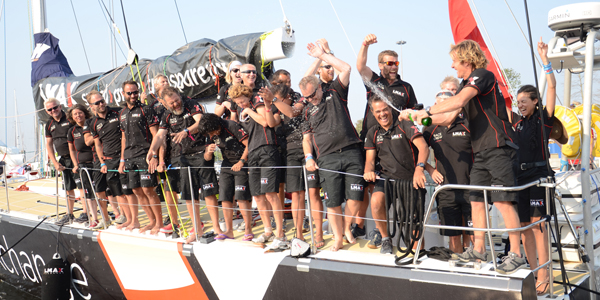 First to cross the finish line in the Atlantic Trade Winds Race to Rio was LMAX Exchange at 1718 UTC yesterday, having led the Clipper Race fleet for most of the first leg from London.

Among the rest of the fleet, teams continue to jostle for position as the remaining places are not so clear cut. IchorCoal has commenced its Ocean Sprint where it is hoping to make up time on Unicef and Da Nang – Viet Nam, who respectively lie 111 and 113 nautical miles ahead with only 2 nautical miles separating the two teams.  IchorCoal Skipper Darren Ladd says: “At our midday meeting we had a chat about the Ocean Sprint and how hard we wanted to go for it. Almost unanimously everyone was keen. The chance for two extra points is worth the slight detour from the rhumb line route.

“Looking at the fastest time Visit Seattle is the boat to beat. Nice one Skipper Huw Fernie! Going by our angle of heel and the constant trimming of sails – we're on it. It will be interesting to see how our boat speed compares to others as we've been mostly sailing alone. Only time will tell.”

As of 0900 UTC, Visit Seattle still holds the fastest time set for the Ocean Sprint. Clipper Telemed+ and PSP Logistics have also completed the Ocean Sprint but could not match the American entry. Naturally, Skipper Huw Fernie hopes they can hold on to the top spot:  “So we sprinted like a… sprinter, I guess. Anyway, whatever we did seemed to work as we managed to cover the 300 nautical mile (5 degree) Ocean Sprint in 29 hours and 16 minutes. Hooray and three cheers all around. It was surprisingly fun in a stressful kind of way. Anyway, that's our time and we can't improve it so now we just have to wait and see what the other teams can do over the next few days.”

At the front of the fleet, weather conditions will make for interesting changes to the arrival times into Rio, as we saw yesterday with LMAX Exchange, which found itself in such light winds 20 nautical miles short of the race finish that it looked like it might be delayed for hours, before managing to find enough wind to power it across the line.

Clipper Race Meteorologist Simon Rowell explains the tricky conditions Qingdao, Derry~Londonderry~Doire, GREAT Britain and Garmin face around Cabo Frio: “On a fairly regular basis small depressions are launched from the South American coast just west or south of Rio, and they travel along the coast rotating clockwise.  This brings a change in the wind from the usual north east flow at Cabo Frio to a south west wind behind the front.

“The front itself usually has a wide band of squally clouds which can bring gusty and rainy conditions.  It looks like GREAT Britain at least was just about to get this, as it was forecasting very little wind which would suggest it was in the brief lull before the front actually hits.

“After it passes the wind should back (change direction in an anticlockwise manner) from the south west to south to south east and then after around 24-36 hours back to the north east again.  There is another, stronger one of these forecast for early next week too.”

With a 50 plus nautical mile advantage over its nearest rival GREAT Britain, Qingdao could be the next team to cross the finish line, sometime later today. However Derry~Londonderry~Doire remains in Stealth Mode until 1200 UTC, who knows where it will emerge – will it have made any ground?

To read more about LMAX Exchange’s impressive victory and hear from the crew, click here.

All estimated arrival times into Rio will be updated here.