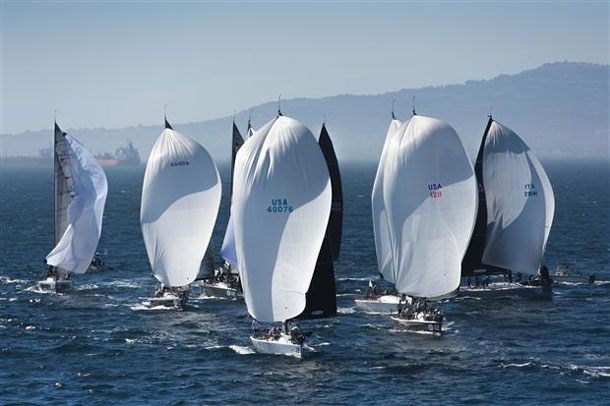 Close racing as always on day 2

Fortunes in grand prix sailing can ebb and flow faster than a spring tide, and the first race of day two of the Rolex Farr 40 World Championship was a perfect example.

Australian Martin Hill and his team on Estate Master followed up day one results (9-8-2) with another mixed bag of 5-4 and 10 to be lying sixth overall, but 15 points behind the leaders.

The class attracts some of the world’s most accomplished sailors to do battle on equal terms, although one team competing at this level for the first time are the university students on Cal Maritime who have never raced a Farr 40 together before. It was little surprise to see them battling at the back of such a high quality 17-boat fleet on day one. However, it appears they are fast learners, as they launched off the start line on day two in light south-westerly breezes, eventually finishing just five seconds behind John Demourkas’ Groovederci in the first race of the day.

Cal Maritime, with Chris Vilicich at the helm, recognised that any little mistake could put them to the back pretty quickly as they followed with finishes of 16-17 in the subsequent races. “It's pretty intimidating seeing some of the world's best sailors right behind you, trying to tell you what to do, trying to persuade you to go another way,” said Vilicich. “It's a little intimidating, but sometimes you've got to do what you've got to do. We've still got to be respectful, because we're the younger guys in the fleet.”

Groovederci’s early victory set the tone for a very good day for Demourkas, who finished 1-5-3. It was an even better day for Wolfgang Schaefer’s Struntje light with the German team cruising to the top of the leaderboard with 4-1-2. These two teams now sit tied on 23 points with Alex Roeper’s victory in the last race of the day (after a 6-8 in the earlier races) putting Plenty, the defending world champion, just two points behind the series leaders at the halfway stage of this challenging regatta. With every race score counted, the Rolex Farr 40 World Championship rewards consistency above all, with the lack of a throw-out race meaning that a team is punished for any error or misfortune.

“Maybe it was the race win, getting our positive attitude going,” said John Demourkas of the secret to their success on the water today.  “It wasn't the best start, but we were able to get to the pressure and come out ahead of the fleet at the first mark. I was quite surprised that we were there, but was pleased we could put it all together. With the amount of kelp out there, it's possible to run over an island [of seaweed] and stop. Luckily we were able to avoid all that.”

Demourkas, who has never been on the podium at a Farr 40 world championship before, had given sails to the Cal Maritime team.  “Some of our old sails were just about to beat me; if they can make them work, good on them.”

In such a tight fleet, Farr 40 racing demands the highest levels of precision, teamwork and the synchronization of all crew members. With mere seconds separating the leading yachts, decisions need to be made quickly and manoeuvres carried out to perfection. These attributes align with the values of Rolex, which has been a partner of the Farr 40 class and sponsor of its World Championship since 2001. Today, Struntje light’s performance was about as precision-perfect as anyone could hope to be in this competitive fleet.

“Today we sailed well, consistent, always in the top five,” said Francesco Bruni, tactician onStruntje light.  “I think our strength is at the start. Yesterday I was a little anxious and made some mistakes; but we are all human, we all make mistakes, but hopefully not again!”

If today’s first race was one to be cherished by the young guns on Cal Maritime, it was one that Alberto Rossi and Enfant Terrible hope to forget. For health enthusiasts, the long straggly seaweed known as kelp is a super-food with health benefits; to a racing sailor, it is a hidden curse lurking on or just below the surface. Twice today the Italians were caught by the kelp and were forced to throw the boat into reverse to shake the seaweed free. Even a second place in the middle race was scant consolation for such a difficult day, giving Rossi a mountain to climb in his bid to add a second world title to his 2013 victory.

This evening Rolex will host the owners’ dinner, a time to relax and share the family spirit of this special group of enthusiasts who battle hard on the water but enjoy each other’s company ashore. On Saturday, battle recommences as the Rolex Farr 40 World Championship enters the final stages.