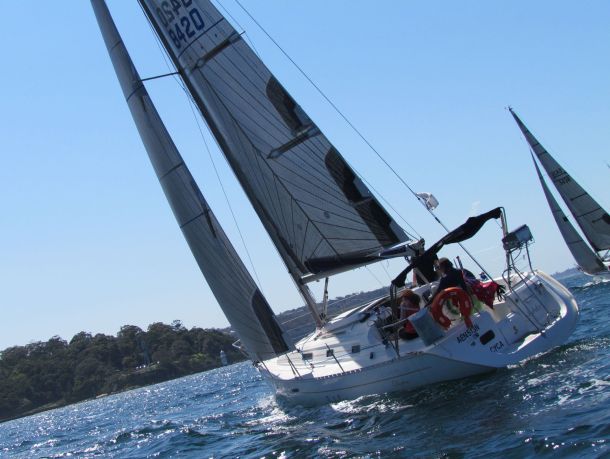 “Everyone got off to a clean start in about 10-12 knots,” Tucker said. “A couple of boats started in the wrong division but other than that we set them off on Course A which is a triangle, sausage course. The conditions were pretty lumpy all day but everyone managed.”

“The day developed into a perfect day, there was constant pressure and opportunities for everyone to improve up wind,” immediate past CYCA Commodore, Howard Piggott said. “The breeze really strengthened later in the day and we hit about 18 knots with our spinnaker up. “It was a really good course and a great day for racing.”

In Division 2 PHS Peach Teats Velocity (Brian Carrick) negotiated the choppy waters from a clean start to take the win.

“We had a great start, won the start easily, great run to Lady Bay and out the Heads,” Carrick said. We had a few contesting wind changes but stayed with the big rig and had two really good spinnaker runs. We are really pleased with the result as it is our first race in choppy conditions; we are all a little bit accustom to the flat waters that greeted us during the Land Rover Winter Series, so it was nice to come away with the win.”

“It was the first time we have done a short haul race, we didn’t know what to expect but it was very pleasant conditions,” first timer Peter McClelland said. “We got a bit lucky in a couple places back up the Harbour but had a fantastic day and very much look forward to the rest of the series.”

Ian Arthy was also pleased to come in second and to retain a lead in the overall pointscore after two races.

“We were extremely excited with the result of today and would like to maintain the pointscore series lead,” Arthy commented. “The conditions today really suited us and my crew of: Kat Meyers, Alan Lusty and Paul Crowther did an amazing job, it really was a great day.”