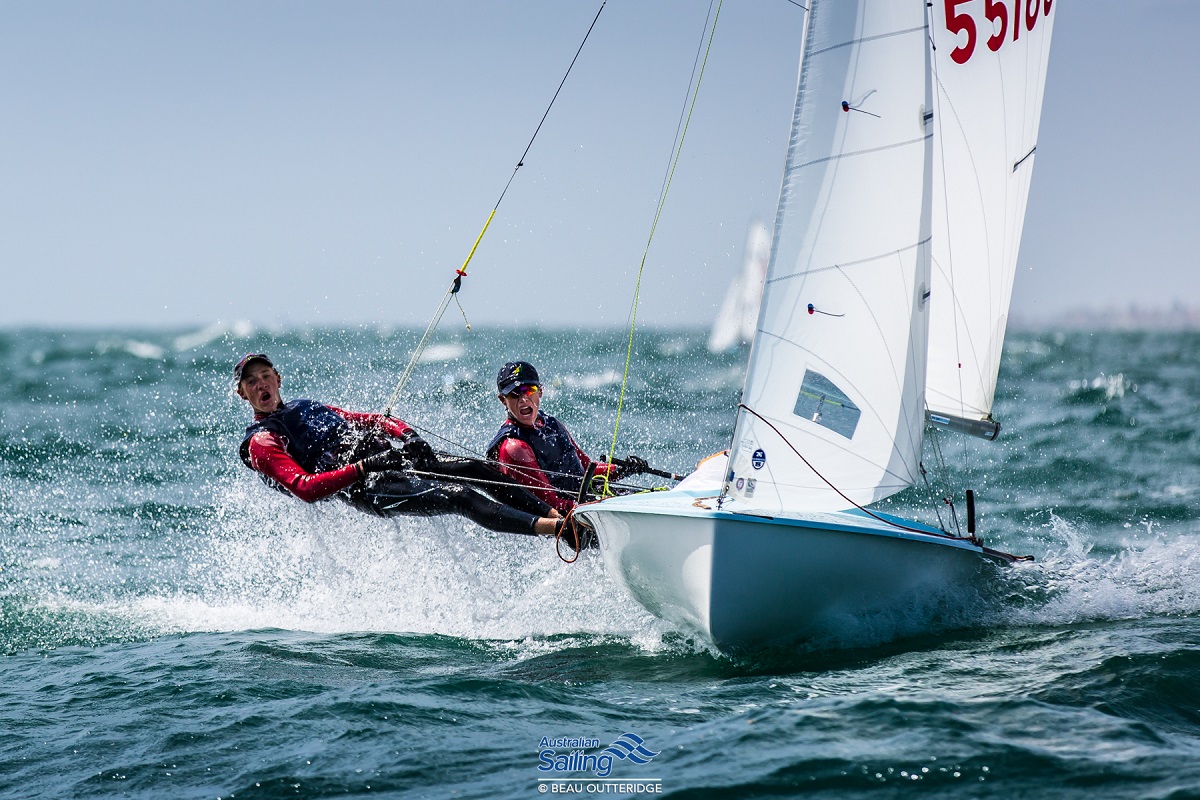 Today’s 20 – 30 knots with up to two metre swell added another dimension to the already broad spectrum of conditions seen at the 2017 Australian Youth Championships. Day three of the regatta began with a postponement on shore as a large squall blew through the Adelaide Sailing Club compound. Once the breeze stabilised all classes were eventually released.

Despite a number of boats retiring, the majority of all five fleets had a blast in the South Australian waters with many sailors exclaiming their enjoyment upon their return to shore. All classes completed two races except the 29ers who completed one race in the testing conditions.

World Sailing’s Youth Gold Medallists in the 29er Women’s Class, Natasha Bryant and Annie Wilmot, also from New South Wales, have also continued holding their first place in the girls 29er division- a result that would now be difficult to lose. They also sit third overall after two strong top ten results in the rough weather.

“Today was the weather we’ve been waiting for! We just aimed to go as quick as we could and play a relatively conservative couple of races. We think we were working too hard on the downwind and after we realised that we made some good gains. Tomorrow will be a real balancing act; we will want to make some gains but don’t want to lose our current positions. We just hope the wind will be strong tomorrow!”

Laura Harding and Eleanor Grimshaw battled the strong winds well with a third and a sixth place tying them for third place overall and preserving their first 420 girls position. Fellow Victorians, Sophie Jackson and Ella Sharman, also performed well with a fourth and fifth place sitting them ninth overall and second 420 girls.

NSW Laser Radial sailor Marlena Berzins, maintains her lead on close rival Western Australia’s, Elyse Ainsworth. The pair have been neck and neck with each other for the duration of the regatta and are now within four points of each other both sitting top ten overall. Not too far behind them is Queensland sailor, Mara Stansky; who handled the breeze well having her sit eleventh overall and third in the girls division.

The Laser 4.7 took the breeze as well as the Radial fleet did lapping up the large swell. 2017 Laser 4.7 National Champion and New South Wales sailor, Jack Littlechild, extends his lead to fifteen points ahead West Australian, Jackson Porter.

“Today I was testing new techniques and tuning my gear; the conditions were a lot of fun out there. This regatta has been about learning what I can about my gear and working closely with my coach, Max. I hope the wind comes in again tomorrow!”

Similarly in the girls division are Queenslanders, Hailey Lea and Courtney Schoutrop. The two played tag with their results after the two races, both scoring a third and fourth. After close racing Hailey maintains her lead just seven points ahead of Courtney. Courtney recapped her day on the water,

“I had a bit of trouble in the light conditions yesterday as I’ve spent the last five months in the RS:X (class) and only jumped back into the Techno 293 for this regatta. The competition has been tight (between Hailey and I) and I’ll just need to take it as it comes for the last two races and hope for some wind tomorrow!”

The final day of racing for the 2017 Australian Youth Championships continues tomorrow with an 1100 (ACDT) start time. Following the racing will be presentation of all winners and the announcement of the 2017 Australian Sailing Youth Team. Presentations kick off at 1800 (ACDT) and will include special guests Rio 2016 Silver Medallist, Lisa Darmanin, World Sailing Council member, Sarah Kenny, and Australian Sailing’s President, Matt Allen.