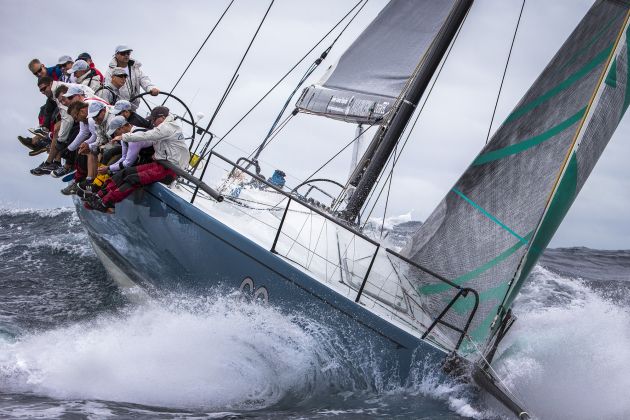 After a night of squalls and southerly breeze, competitors of the 2017 Australian Yachting Championships had a tough stage set for day one. With a solid 15 – 20 knots of breeze in a sea state that resembled that of a dishwasher, sailors needed to strategise how best to complete the near 30 mile passage race to Botany Bay and back.

Race management of hosts, Cruising Yacht Club of Australia, began today’s race on Sydney Harbour and had the fleet divided into two separate starts for Divisions A and B. Racing for Division A kicked off in front of Shark Island at 1100 with the Division B boats following close behind. With the course set, all boats started their race with a downwind leg to Sydney Heads and turned right heading south.

‘Alive’ began their day with a superb start and chose to hold their kite up longer than their close rivals ‘Celestial’ and ‘Team Beau Geste’ taking them further offshore after rounding the Heads setting them up for a stellar upwind, securing a second overall to Team Beau Geste in ORCi.

Three time winner of the Australian Yachting Championship, ‘Team Beau Geste’ kicked their regatta off with a bang not separating more than 5 minutes from their larger rivals ‘Alive’ and thus securing the win for the first race of the regatta in both IRC and ORCi. CYCA locals, ‘Celestial’, secured a second in IRC and are enjoying being able to compete in their local waters after a busy season at interstate regattas.

Skipper, Sam Haynes, said, “The boat lives here at CYCA so it’s great to do a regatta at home after a lot of recent travelling. We knew it was going to be solid breeze so we wanted to ensure we had the right setup for the upwind, which we were happy with. On the downwind we were hoping to lay the heads from the top mark but needed to gybe a couple times closer to make them. Overall, we’re happy with our 2nd place in IRC and hope to keep up the good result over the rest of the week as the breeze lightens off.”

Royal Prince Alfred Yacht Club representatives, ‘Bushranger’, took the win in Division B IRC and ORCi today; skipper Gerry Hatton was happy but surprised given the quality of competitors in Division B. Gerry said,

“We’re very happy with our wins given there are a couple boats who should be quicker than us with their handicap. ‘Philosopher’ sailed a great race and made some gains on us at the Heads on the return, as they knew they could live closer to the cliffs than we thought. Sydney Harbour has its own particularities and it’s useful to have some local knowledge on board to know how close you can sail to the shore. We definitely made some gains on the upwind as we have a heavy displacement hull and made some distance on the waves. We look forward to the week ahead and hope we can keep up the good work.”

“We focused on making as few mistakes as possible with the crew work as we’ve only be able to do Club races here and there prior to this event; I think our boat handling will get better as the week goes on. We were one of the few boats who chose to not hug the coast on the downwind and it seemed to pay off for us!”