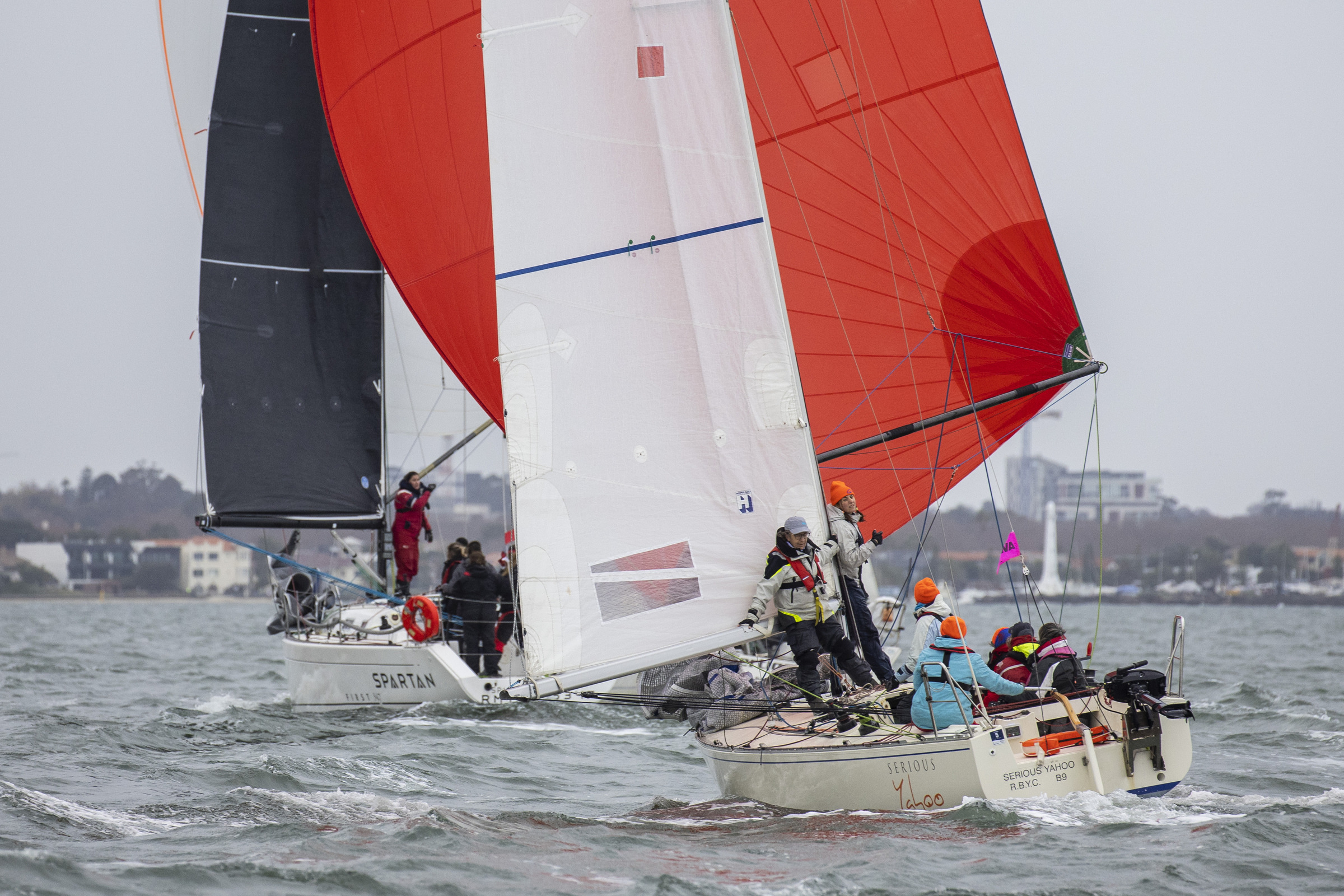 Competitors were put through a tough test on Day 1 of the Australian Women’s Keelboat Regatta (AWKR), not only were conditions rough on Port Phillip, but officials at Royal Melbourne Yacht Squadron decided on three windward/leeward races instead of two, as they looked ahead to Sunday’s wild forecast.

Racing took its toll. The Claire Heenan (Gosford SC, NSW) skippered Adams 10, Jungle Juice, won the first race in Division 1, but lost a crew member overboard in Race 2. She was retrieved without harm but retired from Races 2 and 3 with other boat issues.

Then Henrietta McCrae was forced to withdraw from Races 2 and 3 in the S80 division, when the mainsail came out of the track on Espresso. Maria Vasardani, the bow from the Katie Holroyd skippered Serious Yahoo also went overboard.

Vasardani takes up the story: “We rounded a mark (in Race 1) and I went to put the brace in the beak. Must have been bumpy and next thing I knew I lost my grip and was over at the front end of the boat. I moved myself from the front to the back, the crew kindly hauled me back on board minus a shoe. I managed to set the kite and we finished the race.

“There was a bit of shoe swapping going on,” said the Melbourne sailor. She is also noted for her winter swimming antics in Melbourne, which may explain how she was able to shrug off the icy incident , as ground temperature was 13 degrees Celsius and water 15.5 degrees. Serious Yahoo’s, Vanessa Twig, is also aboard this week.

Jo Breen and her crew on Spartan lost the main halyard in Race 2, so could not start Race 3. However, the Boat Buoys were on the job quickly and the competitive Tasmanian crew from Derwent Sailing Squadron will be back on the race course tomorrow.

The demise of the extremely competitive Jungle Juice left the door open and Tracy Richardson (NSW) seized the opportunity with the Adams 10, 2Xtreme.

The Middle Harbour YC member commented, “2Xtreme was kindly loaned to us by Andrew Clark.

“We had our eyes on Serious Yahoo and Jungle Juice today,” said Richardson who races Adams 10s in Sydney and finished second Adams 10 overall at the Sydney Harbour Regatta in January. We’re sorry Jungle Juice is out, but I’m sure they’ll be back tomorrow.

“Conditions were a little bit like ‘Last Man Standing’,” Richardson conceded at the post-race daily BBQ RMYS provides entrants free of charge along with wine and beer.”

In the S80 division, Cath Beaufort and crew (from RYCV) on Up ‘n Go, went at it hammer and tongs with Tanya Kelly’s Queensland crew on Merak. Beaufort posted 1-1-2 results compared to Team Kelly’s 2-2-1, leaving the former with a one point advantage leading into Sunday’s race.

There are three J70s in the mix this long weekend. Well-respected local Monica Jones is at the helm of Sequel, triple Olympian Karyn Gojnich from Royal Sydney Yacht Squadron is skippering Madness and her club mate, Sarah Ladd, is skipper of The Jackal.

“In the In the first race Karyn just pipped us,” said Sequel crew and AWKR Committee Chairwoman, Kristen Buckland. “It was close racing between the three of us.”

Karyn Gojnich, who came out on top added, “It was terrific. All three crews are relatively green with the J70s. Sarah and I own a J70 together but decided to skipper a boat each and bring down eight other club members.

“It was challenging with big waves and breeze fluctuating from 16-24 knots It was a long day, but so much fun. I really enjoy sailing in Melbourne – you can get the boats surfing downwind,” she said.

“The boat buoys are fantastic. It’s a real treat to have them come down and catch lines. They are so helpful and professional.”

Racing in the 30th edition of Australia’s premier all-women event was underway at 10am, with 24 all-female teams taking to the water at the St Kilda end of Port Phillip.

Race Officer Lou Hutton said after racing, “Winds were gusting in the 20s at times. We were off the water before it really piped in. We ran three races instead of two, as the weather is looking a bit hairy for tomorrow, with 25-30 knots expected.”

Should the weather permit, racing will continue on a windward/leeward track tomorrow. Tonight, crews will enjoy a dinner hosted by RMYS