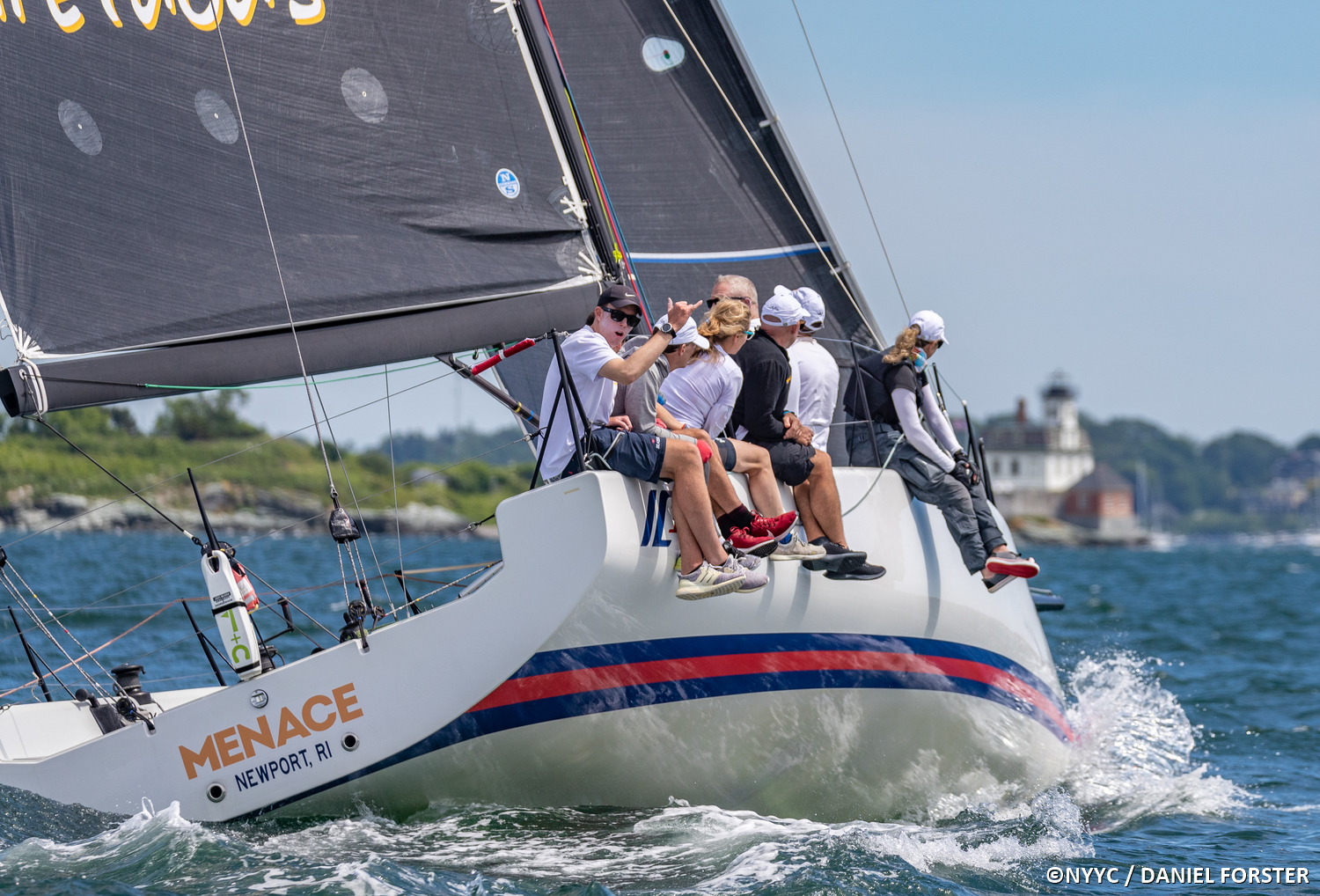 Newport, Rhode Island: Ray Davies spends most of his time in the highly analytical world of the America’s Cup, where empirical data comes by the gigabyte, and little is left to subjective review and he knows to trust the numbers, but also knows to back himself, which he did.

At the pivotal moment of today’s Around the Island Race, on Day 1 of the New York Yacht Club’s 168th Annual Regatta, it was Davies’ sailing instinct that lifted Howard Spencer’s IC37 Menace to a class win in a highly entertaining and tactically challenging 19-mile lap of Conanicut Island.

“We spent most of the race in about seventh or eighth place,” said Davies, who served as a sailor and coach for Emirates Team New Zealand during the 36th America’s Cup and also won the Volvo Ocean Race with illbruck in 2002.

“At the final turning mark, at the [north] tip of the island, we elected to keep our gennaker up and all the other IC37s around us dropped their gennakers and reached. We sailed low, they all slowed each other down, and we had a passing lane down to leeward. That’s where it all happened.”

It’s been an unsettled week in Rhode Island, with the weather going from downpour to sunshine in a few hours and then back again the following day. Day 1 of North America’s oldest annual regatta continued that trend.

The 19-mile racecourse straddled a convergence zone between a punchy southerly sea breeze and an inconsistent gradient flow from the west. Wind shifts of 45 degrees or more were common and the breeze would go from 15 knots to 5 knots in a heartbeat.

In the IC37 class, that meant starting on a jib reach and quickly transitioning to a spinnaker before dropping the kite and beating to the first mark. The long stretch up the West Passage was initially a spinnaker run until the boats sailed out of the sea breeze and into the westerly.

Down came the kites, but they were back in the air before the end of the that leg. The smart move was then to carry them around the top of the island until the breeze again shifted to the south-west and the final leg turned into a beat under the Newport Bridge to the finish.

“The wind was shifting all around the place,” said Davies. “Looking at the boats further ahead, we could see a few boats sailing the low road. They were keeping their gennakers up and that made it a viable option.

“The decision only happened when we were rounding the mark. We were set to drop the gennaker and we made the call to keep it up and wriggle through the fleet and ended up with quite a big lead.”

While Davies and Spencer go back more than a decade, this race was a first for both sailors in more ways than one.

“This is the first time I’ve ever done that racecourse, and it’s the first time we’ve ever sailed in the IC37,” said Davies. “You get that sometimes, a bit of beginner’s luck.”

Whether it holds into the buoy racing tomorrow and Sunday is another question. Historically, the Around-the-Island Race has not been a sure-fire indicator of success in one-design buoy racing.

For the handicap yachts, however, the correlation is much stronger. So, after a convincing overall win in ORC in the lap of Conanicut Island, Hap Fauth’s Bella Mente is looking like the favourite to take the grand-prix ORC A class this weekend.

“We got a reasonable beatdown in St. Barths by Vesper,” said Terry Hutchinson, the team’s tactician. “It shook the Bella Mente and got us back to our roots a little bit.

“Today the team did a really good job of sailing the boat consistently. Proteus won the start, and we were able to sneak round them halfway to Beavertail. From there it was managing the boat handling and sailing through the transitions.”

Hutchinson said the team’s improvement was a combination of some strong pre-event practice and the fact that the team, individually, has been sailing more frequently in other boats and classes.

“A lot of the guys have been doing a lot of sailing, and that makes a huge difference,” said Hutchinson. “We didn’t overreach when we sailed into the transition zones. We let it settle and didn’t rush to get another sail in the air. That was good. We worked very hard to do the simple things really well.”

Winning overall honours in the PHRF class was Beau Van Metre’s beautifully restored Running Tide. Beau’s father, Al Van Metre, purchased the 66-foot Sparkman & Stephens design in the early 70s and campaigned it actively, and with success, through the mid-80s before selling it.

The younger Van Metre reacquired the boat in 2018 and spent the better part of three years restoring and upgrading the classic ocean racer.

“It’s gone from a pick-up truck, a utilitarian racing boat, to a beautiful yacht,” said Van Metre. “It’s a beautiful boat we brought back to way above where it was before. It’s a lot of fun to sail. I’m going to enjoy sailing it with my family and friends and doing a few races.”

The feature event on the boat’s calendar this spring is the Newport Bermuda Race, which will start on Friday, June 17. Today was a good chance for Running Tide to see, well, how fast she’s running. So far, so good.

Racing in the 168th edition of the New York Yacht Club’s Annual Regatta will continue through Sunday on Narragansett Bay and Rhode Island Sound. The first start on each day is scheduled for 11 am.