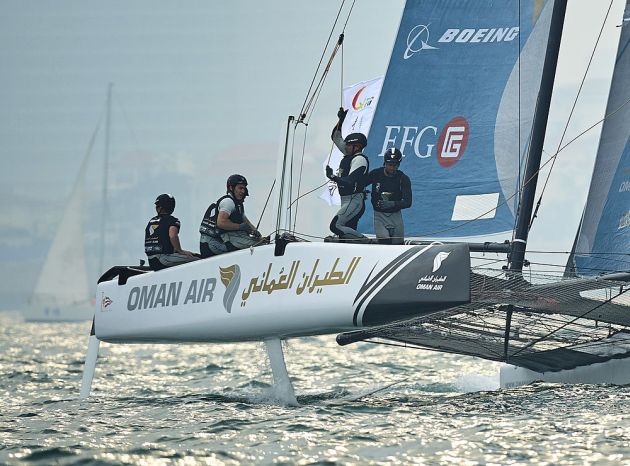 Act 2 of the Extreme Sailing Series is gearing up for a thrilling showdown with just 12 points separating the top three teams heading into the last day.

Swiss crew Alinghi put on another display of consistency in Qingdao’s light winds to go into tomorrow’s finale in front following three days of intense competition in Fushan Bay. But in the fickle conditions Qingdao has been throwing at the eight-strong fleet, victory is far from guaranteed for helmsman Arnaud Psarofaghis and his teammates.

Morgan Larson’s Oman Air, winners of the opening Act in Muscat, are breathing down their necks just four points behind them, while Extreme Sailing Series rookies Sail Portugal are threatening to upset the balance a further eight points back. With 12 points awarded for a win and five for finishing eighth, just one slip-up could see a team tumble down the rankings and out of contention for a podium position, especially given that double points are up for grabs in the final race of the Act.

Alinghi made the most of their experiences of sailing in light conditions on Switzerland’s lakes to get the better of their rivals, winning two of today’s six races. But co-skipper Psarofaghis said his crew would not get complacent heading into the Act 2 finale.

“We’re planning on starting well tomorrow and seeing what happens,” he said. “We just want to stay clear of everyone else and stay fast.”

Oman Air’s Larson, who used to skipper Alinghi until swapping to the Omani crew for the 2016 season, said he is relishing the chance to continue his assault on his old team’s lead.

“Alinghi are a talented team and they did a nice job to stay in pole position but today we eroded their lead a little bit,” he said. “Tomorrow is just about chipping away at them, one or two points a race. Bring it on – we can’t wait.”

Danish team SAP Extreme Sailing Team seemed to finally hit their stride after a tricky couple of days. Statistically they are the strongest starters across the fleet but have struggled to hold onto the lead over the six legs of a race. However a win in race 11, the penultimate of the day, plus two second-placed finishes has left co-skipper Jes Gram-Hansen upbeat about a shot at the podium.

Gram-Hansen said: “We were leading quite a few races today but it’s so difficult when you have light breeze at the gate and the whole fleet is coming at you with pace from behind. Compared to yesterday we managed it a lot better and we’re pretty satisfied. In so many events it has come down to the last few races so let’s see what happens tomorrow.”

Day 3 also saw Chinese crew One bounce back from a string of disappointing results to win the last race of the day, much to the delight of the huge crowds that turned out to support their home team.

“One is a new team to Extreme Sailing Series and we are getting better day by day,” said One’s Liu Xue, best known as Black. “We were lucky today because in the last race we got ahead and managed to hold onto the lead right until the end.”