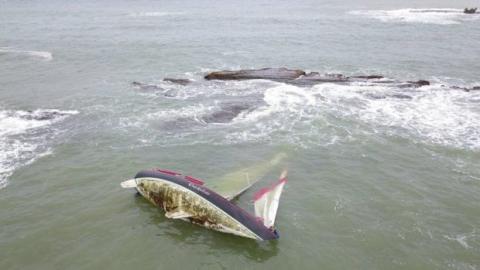 Three yachsmen were rescued off the coast of Morgan Bay, South Africa, after abandoning their yacht.

The National Sea Rescue Institute (NSRI) was alerted to the three missing sailors after the wife of one reported that their boat was sinking off the Kei River Mouth. The three men had been attempting to sail to Durban but had encountered difficulties. The NSRI was able to contact the sailors on a cell phone, finding out that they had abandoned their yacht and were currently adrift in a life raft.

The NRSI launched several waterborne craft before an EC Government Health EMS rescue helicopter joined the search. The abandoned craft was soon located at the Kei River Mouth, but with the sailor’s mobile phones now dead, they were still missing.

After an extensive search, the EC Government Health EMS rescue helicopter was able to locate the sailors. Two NSRI rescue crafts were guided to the men, who were then rescued and taken to nearby East London. The South African Maritime Safety Authority has announced it will be opening an investigation into the accident.