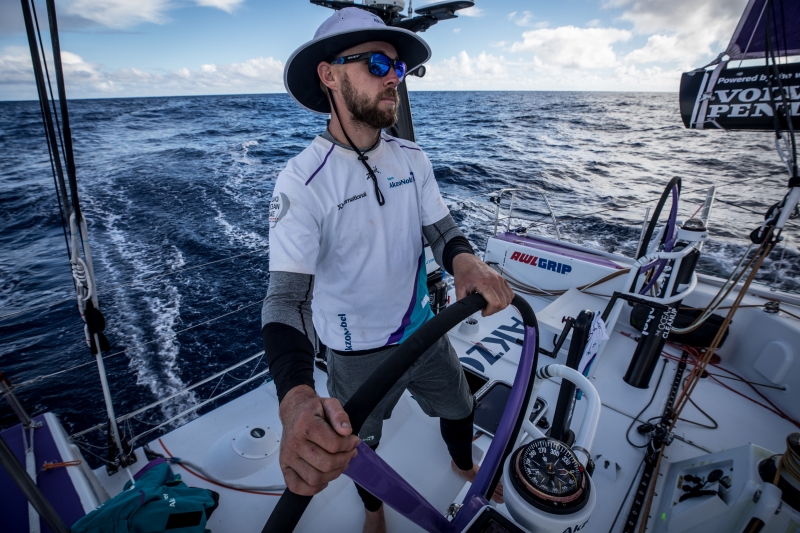 Team AkzoNobel have nearly closed to within 100 miles of Itajaí, Brazil, and the Leg 7 finish line on Wednesday, on course for a third place podium finish behind winners Team Brunel and second-placed Dongfeng Race Team.

Simeon Tienpont’s AkzoNobel crew were more than 430 miles ahead of closest rivals Turn the Tide on Plastic, practically guaranteeing them third place provided they don’t suffer any mishaps in the final hours.

Although the pressure on them from behind has eased, it won’t be an easy run in to Itajaí – the low pressure system that rocketed Brunel and Dongfeng to the finish line has passed, leaving behind light and fickle winds.

The light conditions mean AkzoNobel are expected to cross the finish line between 0900 and 1500 UTC on Thursday.

The bigger battle is taking place more than 400 miles south of them, as Turn the Tide on Plastic and MAPFRE race for fourth place.

Both teams have suffered problems with their mast or rigging on this leg, while MAPFRE had the added setback of their mainsail tearing in two on the approach to Cape Horn.

The relatively short time it took each team to get back up to full pace has seen them stuck in the clutches of the light winds generated by a high pressure system which is all but blocking their progress north.

But there was laughter and cheers on Turn the Tide on Plastic as skipper Dee Caffari came up on deck to announce they had been travelling twice as fast as MAPFRE over the course of one position report and had stretched out a lead of almost 100 miles.

At 1300 UTC on Wednesday that advantage had grown to almost 170 miles as Turn the Tide on Plastic continued to enjoy better speeds than their Spanish rivals.

“The final miles are always tough but this is particularly tough,” Caffari said. “We’ve been dogged by a high pressure which we couldn’t get out of because of our rig issue. But our competition now is with MAPFRE and we seem to be doing quite well out of it at the moment. It’s nice to have some good news.”

The current ETA for Turn the Tide on Plastic is on April 7 between 1200 and 0000 UTC, while MAPFRE are expected approximately 12 hours later.

Two teams have retired from Leg 7 and both Vestas 11th Hour Racing and Team SHK/Scallywag continue to progress plans to get their boats back in the race. News is expected from each team shortly.