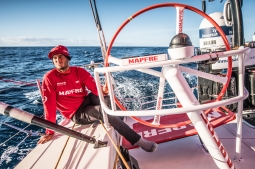 With only two Volvo boats still racing towards the finish in Itajai, Dee Caffari’s Turn the Tide on Plastic opened up a lead of more than 270 miles on rivals MAPFRE on Thursday as they continue to post better speeds.

Two days ago Turn the Tide were just 90 miles ahead of Xabi Fernandez’s Spanish outfit as they both resumed sailing having suffered breakages in the hours after rounding Cape Horn.

At 1300 UTC today that lead had tripled as Caffari’s crew profit from a three-knot speed advantage.

With the Leg 7 podium completed by winners Team Brunel, second-placed Dongfeng Race Team and team AkzoNobel, who finished earlier this morning in third, the two teams are now racing for pride and valuable points.

Spirits and competitiveness remain high among the sailors as they fight for every last knot of boat speed in the sprint to Itajaí, Brazil.

However the last few days of the leg continue to throw challenges at Turn the Tide and MAPFRE.

“We had one big huge cloud with lots of rain in it and unpredictable wind, meaning we had to do lots of tacks and gybes just to keep going in a straight line,” Caffari explained earlier today.

“There’s a bit of a clearing now but another big cloud beyond. It’s far from relaxed, especially when there’s a red boat (MAPFRE) involved. We’ve got a 250-mile buffer but with 350 miles still to go, and knowing how we finished in Auckland, it doesn’t seem enough.”

On board MAPFRE the issue is less about the weather, and more about their rapidly-depleting food supplies.

Boat captain Antonio ‘Neti’ Cuervas-Mons today called on rationing to begin with one bag of food, usually enough for one day, having to last them three.

“We’re obviously running quite short because of the long run since the Horn – we haven’t run out just yet but we’re having to ration food,” said MAPFRE’s Blair Tuke.

“It’ll be tough but we’ll be ok. No doubt it’s been a bit frustrating watching Turn the Tide sail away from us but we’re just looking forward to getting in and focusing on the next leg.”

The current ETA for Turn the Tide on Plastic is on April 7 between 1200 and 0000 UTC while MAPFRE is expected to follow 12 to 16 hours later.