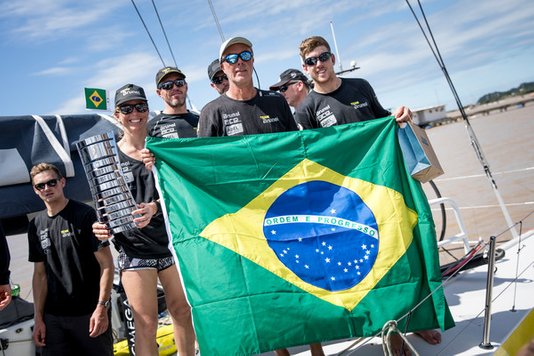 When the Volvo fleet was in Auckland, Mysailing spoke with Australian Olympic silver medallist Nina Curtis about her up-coming leg deep into the Southern Ocean. Although she had competed in the Sydney Hobart Yacht Race, this would be her first experience of a Volvo boat. You can read the interview here.

At the time, no-one knew that the leg from Auckland to Itajai would encounter the worst conditions for at least five iterations of the race. Hammered by a succession of Lows, the fleet took a real beating. On Scallywag there was the tragic loss of crewman John Fisher who was washed overboard, while Turn the Tide on Plastic was dismasted and diverted to the Falklands and race leader MAPFRE tore the track off their mast and suffered mainsail damage.

Meanwhile, Nina and the crew on Brunel led the fleet into Itajai. We asked the Brunel media team to put some questions to the bubbly Australian and her answers didn't disappoint. Watch the video below for an insight into what it's like getting fire-hosed by freezing water while surfing down waves at over 30 knots.