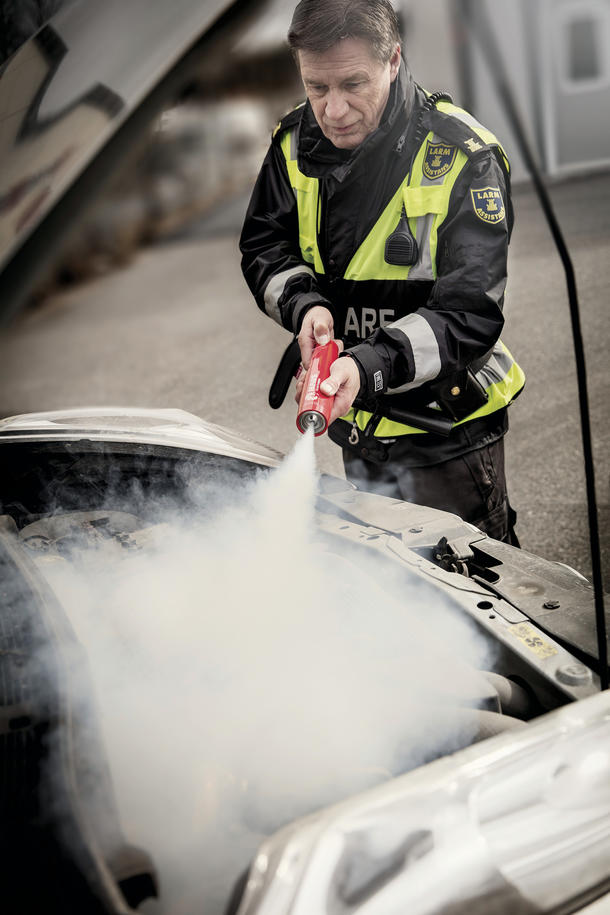 Fight fire with smoke with the Maus Xtin Klein, the world’s smallest and most versatile fire extinguisher. Its residue does no harm to engine, electronics or interior when discharged.

The company says Xtin weighs only 480 gram is 24 centimetres long with a diameter of only 7cm, yet has the same extinguishing time as a two kilogram powder extinguisher of around ten seconds. This makes it perfect to fight any small fire on board, whether petrol, diesel, electricity, gas, cooking oil/fat, oil, wood, plastic etcetera.

The Xtin is a non-pressurised fire extinguisher that you do not have to check for five years. Maus provide a warranty for 5 years from the production date. At the end of use it is disposable as a normal tin can.

Made in Sweden originally for the Russian space program, the National Swedish Bombsquad has equipped their cars with the Xtin Klein while the national security company in Sweden, Larm Assistans, has equipped its personnel with Maus in its custom holsters.

If there is a fire onboard the Xtin is pointed at the fire and releases a potassium based aerosol, which will not leave residues. It is not susceptible to electrical fires like water-based extinguishers. It also effectively blankets oil fires without spreading the flames.

The aerosol does displace oxygen but the aerosol forms a cloud where the Xtin is directed to effectively cut off further fire recurring; it does not spread to fully fill a cabin space, allowing the user time to escape.

This is aerospace technology you can carry in your pocket, in the galley drawer, clipped onto the engine box or in the navigator’s table. Certified by RINA SpA and CE.

An Australian distributor is expected to be announced soon.