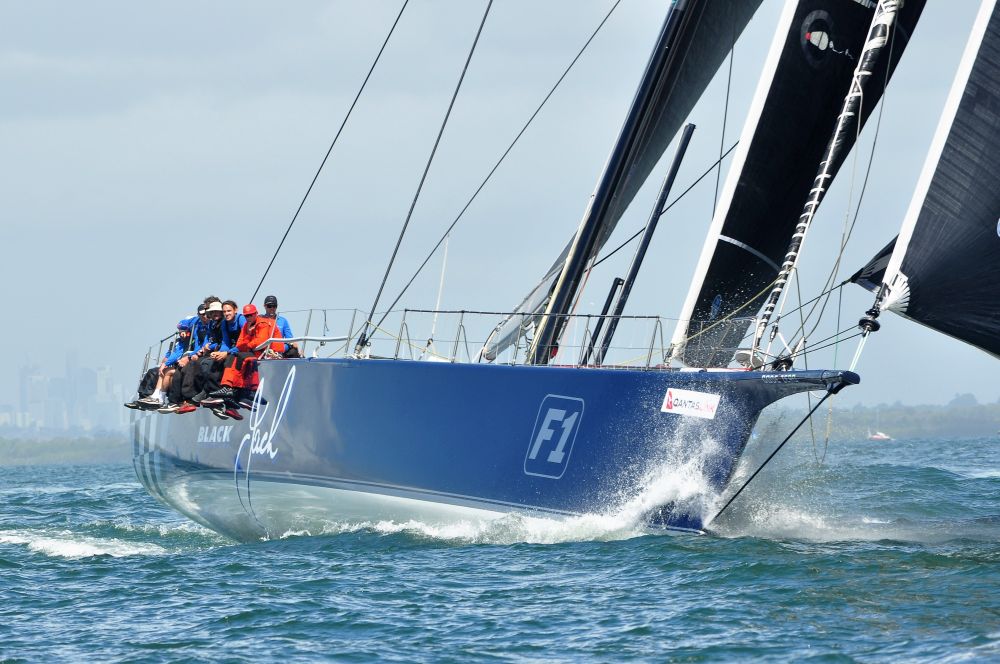 Black Jack on a record run from Brisbane to Gladstone. Photo Shoebox Images.

The QantasLink 70th Brisbane to Gladstone Yacht Race, organised by the Queensland Cruising Yacht Club, was one to remember for many reasons other than just the historic landmark it reached.

The race started in near perfect conditions in Moreton Bay on Good Friday with the help of multiple low-level flypasts by an RAAF C-17 over the start line. Following on from the success of the LiveStreaming of the race last year, QCYC increased the number of cameras and included a drone for the 70th race.

The whole fleet rounded the first mark off Redcliffe in under 50 minutes; a clear signal of a fast race ahead. Unsurprising, leading the fleet was the 100’ Black Jack who quickly stretched her legs and thundered up the coast intent on one thing only, beating the 14 year old record for the race set by Skandia of 20 hours, 24 minutes and 50 seconds.

The winds gradually increased during the race and importantly didn’t drop during the darkness hours. Boats were reporting constant 30 knot winds and confused seas. Most boats experienced some level of sail damage but despite the hard and very wet conditions only three boats retired not making it to the finish.

With such a fast boat and good pressure most felt that Black Jack was finally going to beat the record but as she powered into Gladstone harbour under the cover of night it became clear that the record was not only beaten, it was smashed by three and a half hours with a time of 16 hours, 53 minutes and 57 seconds.

Behind the 100 footer, the two 52 footers of Ichi Ban and Envy Scooters (ex Ichi Ban) duelled it out for the entire race with Matt Allen’s rocket ship only really getting away from Envy as the two boats crossed ‘the paddock’ to Gladstone. As Ichi Ban crossed the line the realisation that not only one but two boats had beaten the 2004 record dawned. Ichi Ban now holds the record for the fastest time for a conventionally ballasted boat of 19 hours, 36 minutes and 42 seconds.

With the first three boats in, eyes turned back to the main pack which was still incredibly tightly packed; fourth over the line was Ray Roberts new toy Team Hollywood followed by the every competitive Kerumba and then there was no stopping them, the fleet streamed in.

In general, it was a big boat race. Matt Allen and Ich Ban took the overall prize and coveted Courier Mail Cup and in doing so achieved a historic Sydney Hobart/Brisbane to Gladstone double. The boat also managed a haul of other prizes including winner of the ORCi division, Four Cities Cup and the Federation Cup, the Club team event, with fellow CYCA boats Team Hollywood and Sail Exchange.

There were some exceptions to the big boat domination. Fusion took the PHRF division and there were good showings by Mayfair and Matrix but the real trend bucker was Wistari who was competing in her 50th edition of the historic race, an achievement of its own. The little home built boat featured heavily in the prize giving taking out a number of the divisions including the Vintage Division.

Second place in this division was Laurabada who incredibly, kept just ahead of Wistari in the records books by notching up her 51st race! How many races in the world can boast not one but two such long running competitors?

Also, of special mention was Marriah. The crew on this yacht stopped racing for almost five hours to give assistance to another competitor who suffers rudder damage. The efforts were immense and demonstrated the bond that exists between all sailors.

Full results can be found at www.brisbanetogladstone.com