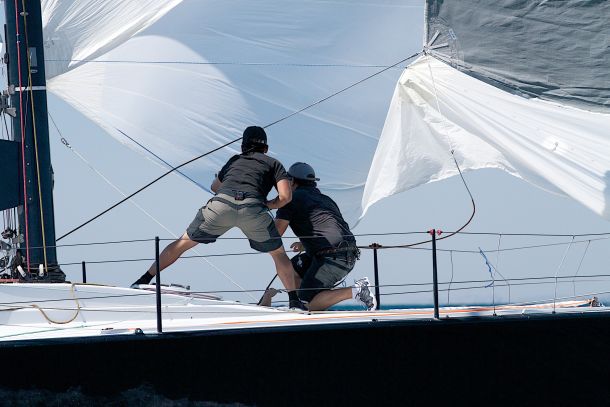 The Division 1 IRC fleet started Geographe Bay Race Week with a trio of windward/leeward races and if the results of the day’s racing set the tone for the week, we are in for some very tight racing indeed. Each of the three races was won by a different boat and only Gary McNally’s Black Betty managed to score a podium finish in all three races.

Peter Hickson’s colourful ME II won the first race by a margin of just 18 seconds. The Ker 39 is showing great uphill speed and was snapping at the heels of the 42 footers at times. The Foundation 36 Grand Prix was second and Black Betty sailed a very tidy race to finish third, only 9 seconds behind Grand Prix n corrected time.

Calm was untouchable in the second race, sailing great downwind angles and winning by 57 seconds over Black Betty with ME II third.

Black Betty won the final race of the day ahead of David Walling’s Farr 40 The Next Factor by a margin of 49 seconds. Calm was third, another 55 seconds behind.

This contest is only just beginning. Peter Chappell’s hot full carbon flying machine The Cadillac showed some startling speed downhill today so it will be no surprise to see this boat in the mix as the week rolls on.

There is some beautiful machinery on show in the Jib and Main division, which was won by Don Brooker’s Sense 50 Dorade ahead of Martin Chambers Sandale, both Bali Race veterans, with Janet Hornbuckle finishing third.

Wild Bull, skippered by Jamie Weeden and with father Bill Weeden, a past commodore of EFYC on board, had a less enjoyable day. A halyard slipping off the sheeve at the masthead required a man to go aloft, and they finished the day with two torn sails in the locker.

The Premier Cruising Green fleet was led home by Gordon and Di Dunbar’s Spritzig 2. Rod McGregor’s Aida was second and John Wallis’ Golden Eagle third. The fleet will be joined tomorrow by Ben Olsthoorn’s Mini Transat, Recalculate, which arrived at Geographe Bay from Bunbury while racing was in progress.