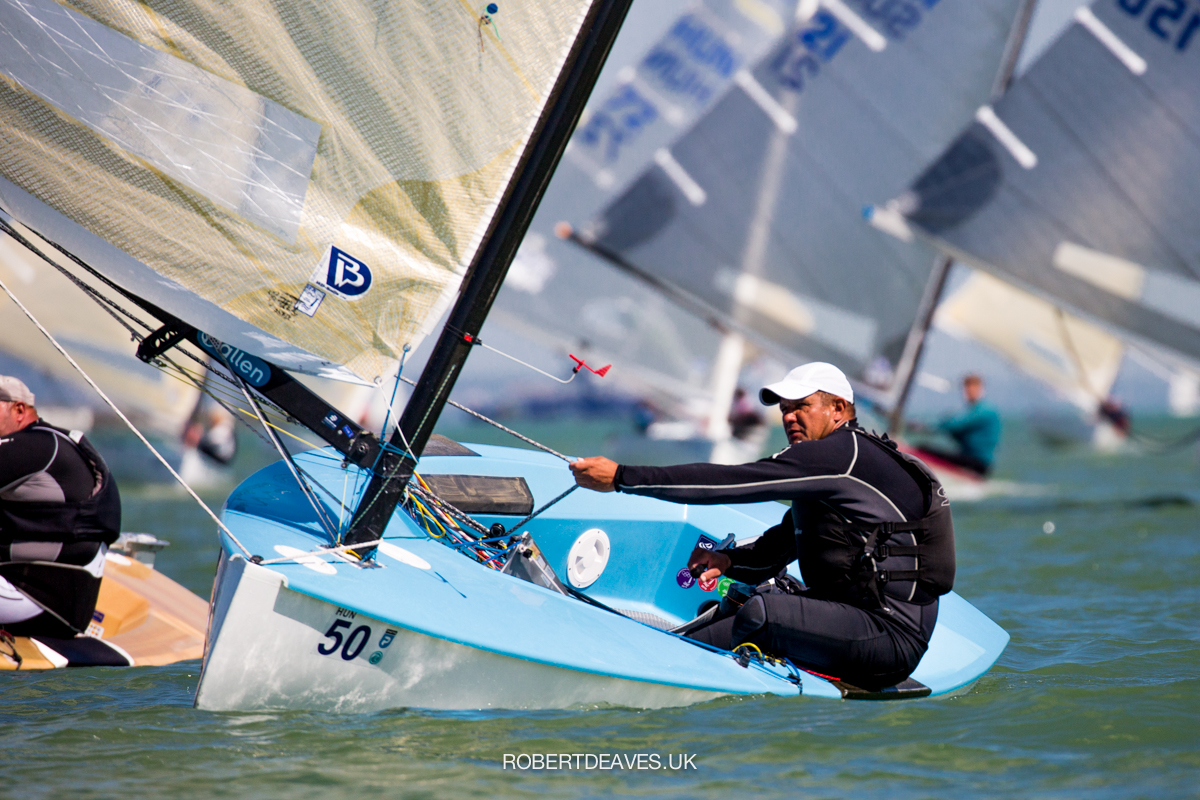 Hungary: The new Hungarian national champion, Akos Lukats, has taken the lead on the penultimate day of the 2021 Finn European Masters at Tihanyi Hajós Egylet in Tihany, Hungary.

Bas De Waal, from The Netherlands, is back up to second with Taras Havrysh, from Ukraine, up to third. There were race wins for Harvysh, Waal and Vladimir Stasyuk.

There is still all to play for on the final day on Saturday with Lukats holding a four-point lead over de Waal, and Havrysh just one further point behind.

Havrysh took the first race of the day from de Waal in the steady easterly that also stayed in place for the second race. De Waal rounded the top mark well up in the next race and then took the left downwind to move ahead and extend on the fleet for a comfortable win.

The final race of the day was trickier, with the wind getting lighter and shifting more to the right. Lukats started at the boat and tacked immediately to the right to get the incoming shift into the top. He led all the way only to be passed by Stasyuk on the final downwind, but had done enough to take the overall lead from Zdenek Gebhart, who had a high scoring day and dropped to fourth.

“I went into this day in second place and I didn’t do very well in the first one. I started at the pin end and was really fighting for my place. I didn’t have the right speed, but I managed to save that for seventh. The second race was one where you don’t really nail anything and I don’t know where I came,´ Lukats said.

“Then in the last, I decided to take the right and started at the boat and it paid. I was leading all the way, but still couldn’t win the race, so I now have four second places. I could have won all of them, but I guess it’s not too bad. But a nice day overall.”

Lukats has been sailing Finns for 14 years. On taking the lead, he said: “It’s kind of a dream really over these two weeks. Last week we had the Hungarian nationals and I never had the ambition, but I accidentally won that. There were many factors, but it was a miracle. Let’s see if it continues.”

As Bas de Waal moved back up to second overall, he commented, “It was again a beautiful day. The wind was more stable than the other days. In the first and second races, the best lane was to the left and that’s what I did and finished second and first.

“In the third race, the wind became unstable and it was difficult for me to manage that, so I got a 12th, but a beautiful day.

“There’s just four points to first, and tomorrow everything can happen, so I hope we get the same the stable wind.”

The Championship concludes on Saturday. Three more races are scheduled, however, the forecast is not particularly optimistic.