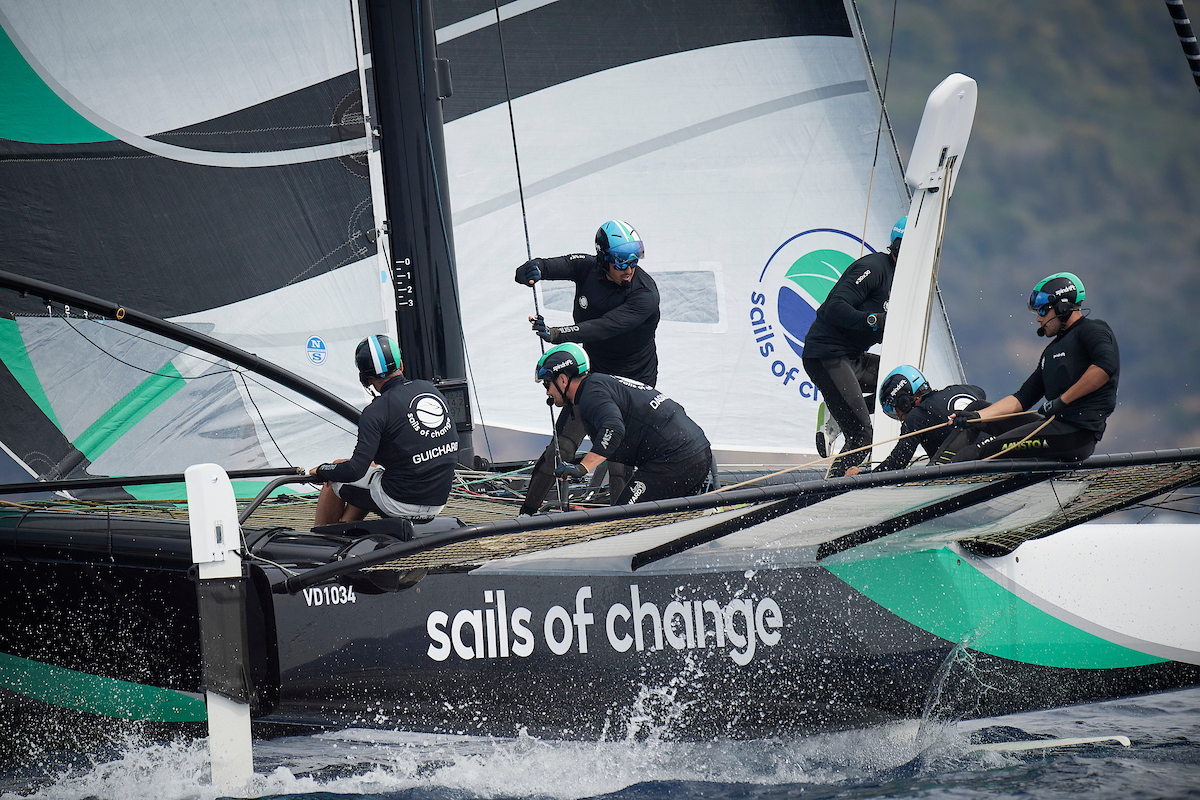 Spindrift is on the boil - Loris Von Siebenthal pic

A challenging second day for the seven TF35s in Scarlino started with an hour delay ashore as the moody overcast skies prevented the sea breeze from kicking in, and when the racing got going, it was in an inconsistent 6-8 knot breeze with the mountainous Tuscan coastline and the island of Elba looming silhouetted in the background.

The outstanding performance of today was unquestionably Spindrift. With Yann Guichard at the helm, the team claimed a hat-trick of wins in the day’s first three races.

“Yesterday we finished fourth so many times it felt like it wasn’t becoming hard to break, and the two lead teams felt stronger, but I’m happy to say that’s not the case,” explained headsail trimmer, Antoine Rucard, on the dock.

“We had good starts, good speed and just focused on staying ahead, but it wasn’t easy,” he conceded. “The racecourse was hard to read. It was difficult to make the right decision on when to deploy the gennaker upwind.”

With Spindrift on a roll, it wasn’t until the final two races of the day that Realteam Sailing and Alinghi could reclaim the top spot. Realteam winning race seven with a considerable lead over the fleet, and Alinghi repeating the performance to win in race eight.

Realteam Sailing maintains her one-point lead over Alinghi in the overall ranking while Spindrift is a comfortable third.

Having a lot of fun at this regatta is French sailing legend Loïck Peyron: “It is a great discovery for the team and I as we have never raced in Scarlino before.” Tactician onboard Frédéric Jousset’s Team SAILFEVER, Peyron and his new crew had one of their best days of the season so far today with a second and third-place finish in the final two races.

“With Team SAILFEVER we are sometimes leading the chasing pack, or sometimes queuing at the back of the breakaway – we are fighting between these two positions”, he said. “We are getting better every day, but the problem is so is everyone else, so the progression is hard. The level of racing is quite high.”

Currently in fifth place is Ylliam XII – Comptoir Immobilier but they have struggled with their consistency so far. Sixth-placed Zoulou bounced back nicely from an OCS call in race four to finish fifth, and Zen Too finished today on a high with a comfortable fifth.

Five races are planned for tomorrow, with the first warning signal set for 12.00CEST follow the action live on the tf35.org homepage.

Results after 8 races and 1 discard: