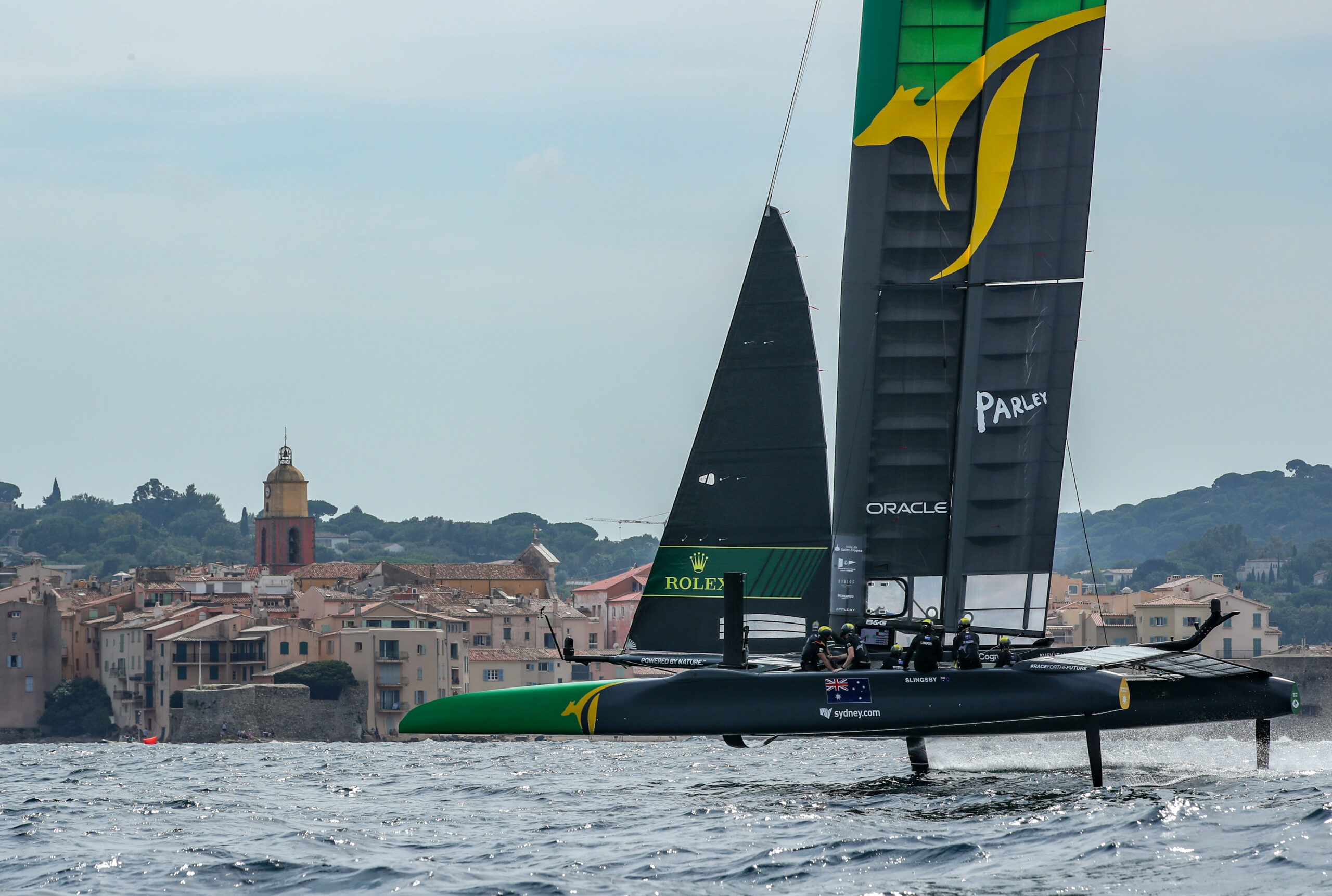 Can the flying Kangaroo keep the rest at bay this weekend? - SailGP pic

France: The fifth event of SailGP will make its debut in the world-famous French seaside resort of Saint-Tropez this weekend, for the France Sail Grand Prix, where Tom Slingsby and the Australia Team are hoping to keep their winning streak running following their domination at the Denmark and Plymouth SailGP events.

As SailGP nears the midpoint of Season 2, there has been plenty of drama as the world’s best athletes go head-to-head in identical, high-speed F50s. So far this season there have been capsizes, a notorious black flag, near misses, crashes, controversy, broken bones and continuous heated rivalries.

Currently placed seventh, all eyes will be turning to the France SailGP Team and its eight-time world champion driver, Billy Besson – featured in the newest episode of SailGP Racing on the Edge – to follow the Danish team’s lead from Aarhus and win for the first time in front of a home crowd in Season 2.

The first half of the season has seen mixed results for the French. Looking to regain his winning ways by replicating podium finishes from events in Bermuda and the U.K., Besson has his sights set on driving home a big win in front of a home crowd.

With Tom Slingsby’s Australia team clinching back-to-back wins in the U.K. and Denmark, it’s do-or-die time for the rest of the eight-nation fleet in the chase for podium finishes at the remaining events of the season.

“Obviously we are coming off a high winning the last two events, but we know this sort of high won’t last forever – we will get beaten soon. But the team has a really good energy right now and we are sailing confidently, and I’m really proud as driver and CEO of the team that we are sailing so well,” Slingsby said.

“For sure Nathan (Outteridge) is licking his lips at the light-air forecast and is very pleased with that, but anyone can win – that is clear to see,” Slingsby said.

“In the Australia team we consider Nathan and the Japan team to be the best light-air sailing team here, and we’ve had quite a few light-air venues and that is a weakness of ours in the past. We are always looking at the data from Nathan’s boat, so we copy them, and then we try to elaborate and improve on their techniques.”

Breathing down the neck of the season’s current leaders is Ben Ainslie’s British team, separated from the Aussie’s by a mere two points. After being heavily penalised during the podium race in Denmark, relegating them to a third-place finish,

Ainslie’s colorful language has been replaced with laser-like focus for the upcoming race weekend.

“I actually thought I was reasonably restrained, given what was going on and what was at stake. It kind of ended our chances of winning the race and all three teams were in with a chance of winning, so it was a shame, but look, it’s done. Five minutes later, you move on,” Ainslie said.

“Our team isn’t sitting here wounded that we had a call go against us and that it’s going to ruin our event in Denmark or the championship. That is part and parcel of racing at this level; you take it on the chin and move on.

“It’s a bit of a moving point in the season with Saint-Tropez and then straight onto Cadiz, before a bit of a break. So it’s really important for all the teams to try and get some solid results with the goal of being in that top three for the final event.”

With split results so far this season, the ‘wind whisperer’ Nathan Outteridge and his Japan SailGP Team currently sit in third place on the leaderboard, just three points behind the Brits.

Outteridge said: “We’ve had a bit of an up and down season with two good results and then two results outside the top three, but we want to smooth it out a bit and be a bit more consistent in the top half.”

On the leaderboard, Japan is currently edging out Jimmy Spithill’s fourth place U.S. team by a single digit; while tied at 23 points-a-piece with the French are Peter Burling’s New Zealand team in fifth, and Phil Robertson’s Spanish team in sixth spot.

Nicolai Sehested’s Denmark SailGP Team presented by Rockwool rounds off the leaderboard in eighth position. Joining the F50s on their racecourse, will be 35 youth sailors from France and nearby countries, Netherlands and Ireland, who will put their skills to the test aboard RS Feva and WASZP boats as part of SailGP’s Inspire Racing program.

The league’s community outreach initiative for a better sport, working alongside the Ligue Sud de Voile and French Sailing Federation FFVoile, will see young people aged 19-23 showcase their sailing abilities for family, friends and fans ahead of the main event in Saint-Tropez’s iconic natural stadium.

Also at the France Sail Grand Prix, and as part of its race for a better future – accelerating the transition to clean energy, SailGP is working with Energy Observer using their zero-emission hydrogen power generator at the event to test clean energy solutions.

The sustainability partnership also features Energy Observer’s “cube” exhibit in the spectator area of the race village. This interactive display is used to educate and encourage spectators as to the importance of building a cleaner future. An exhibit can be found located between the Portalet Tower and the Môle Jean Réveille for visitors to Saint-Tropez.

Thrill-seeking fans from all over can expect two days of action-packed racing in the Gulf of Saint-Tropez, beginning on Saturday, September 11. The France Sail Grand Prix comprises five fleet races and a final podium race where the top three boats will battle it out on the water to decide the event winner on Sunday, September 12.