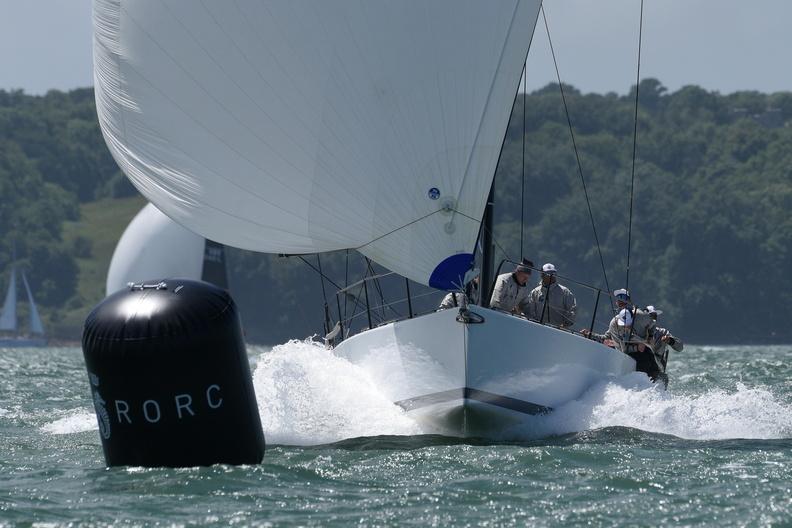 Cowes: A further three windward-leewards were held on the central-eastern Solent on day two of the RORC’s IRC National Championship in yet more exceptional conditions – 15-20 knot WSW winds and brilliant sunshine.

At this regatta – one of the top international titles under the RORC/UNCL-owned rating system – the fleet is split into three classes according to their speed (or TCC rating). After day two significant leaders have emerged in all three, but by the end of tomorrow to be determined will be the 23rd IRC National Champion (since the first in 1999).

A published formula determines the outright winner and at present, with the discard applied, Adam Gosling’s JPK 10.80 Yes! leads Niklas Zennström’s Rán and John Cooper’s Cape 31 Fanatic, separated by just a fraction of a point.

Today Rán scored a further three bullets in Grand Prix Zero/IRC One. With a perfect scoreline, it is hard to see what more the team, that includes world class pros such as Tim Powell, Steve Hayles and Justin Slattery, can do to claim the title.

In today’s second race, they were called OCS, returned to restart…and still won. However, the IRC One fleet is smaller than the other two, requiring its leader to work harder to be claim the title.

Seven points astern of Rán is Ian Atkins’ GP42 Dark N Stormy and two further points back is the Ker 40+ Elvis of Swede Filip Engelbert. According to Dutch legend and tactician Bouwe Bekking Elvis is suffering from some rust, having not sailed for some time.

“In three races we were in the lead, but we had some mechanical issues (spinnaker drop line breakage) and with our manoeuvres – a wine glass in the spinnaker (in the second race),” he said.

Bekking has raced under many different rating systems and appreciates IRC: “I think it is very good when you have similar boats. Generally, it works out nicely – here Rán is a little faster but it works out pretty well and we are all so close, so you know who is first while you are on the water.”

A race within a race is taking place between the two IC37s, Nick Griffith’s Icy and Robert Bicket’s Fargo. Icy got the upper hand today. “It was a great day sailing – perfect conditions – arguably some of the best racing I have done in the Solent in a very long time,” commented Griffith, MD of yacht sales and brokerage conglomerate Ancasta Group.

“We had great racing between the two IC37s – both boats had a number of 49er sailors in their crew who, not surprisingly, were very competitive. It was great fun to watch.”

In IRC Two, John Cooper’s Cape 31 Fanatic comfortably leads, but today’s best performance was the 2-1-5 of Lance Adams’ Katabatic ending the day six points off the lead and with Tony Dickin’s Jubilee, winner of today’s first race, one point behind. This trio now holds an eight-point cushion from Michael Blair’s King 40 Cobra, which was second in today’s final race.

Like Rán, Katabatic was called OCS in race two today but nonetheless claimed the bullet. Adams felt their results today came down to…“getting in the groove on the upwinds in the chop, so we were in contention.

“We have been working on different ideas and they worked today.” Generally racing for Katabatic at this IRC Nationals has been superb. “The Cape fleet is something else. And what an amazing two days we’ve had: Wind, sun, clear skies – you couldn’t ask for more.”

“We had a good start, in the middle – in fact it was quite difficult to get across the line on starboard,” recounted McIrvine. We carried on while our main enemy – Sailplane and Cobra – went right. We had a couple of nice shifts which got us into the lead. Then we were going really fast and deep downwind, fast enough to stay ahead of the planing Capes.

“Considering we’ve had very little practice; we had some very good crew work with nice gybes. I am pleased we sailed yesterday before it got even windier today, because it was quite a handful.”

“We had a good day – the boat is going well and it is nice to be in touch with Yes! We had some great tacking and gybe duels with them,” Chalmers said.

Having campaigned the J/35 Bengal Magic for years, Chalmers has noticed how competitive the IRC Nationals’ smallest fleet has become: “Everything has got closer: We are closer to Yes! and staying ahead of the slower boats is so difficult. It is great racing – you make a mistake and you pay for it.”

In a new development for the IRC Nationals, extra youth and female crew are permitted to race on board. As a result, Chalmers’ 12-year-old son is on board for the first time.

Also on a steep learning curve are the inner-city students from the Greig City Academy on Cote. Their tweaky Quarter Tonner is proving a handful and today they suffered a prolonged broach.

“It’s a great learning experience,” commented jib and spinnaker trimmer Christopher Frederick, who is in his 12th year at the school in Haringey. The school is well known for its pioneering sailing program initiated by Jon Holt. Frederick is in Year 12, but tries to sail every moment he can, both at the weekends and Laser dinghy sailing during the week in London.

The final day of the IRC National Championship is tomorrow (Sunday), forecast to take place in marginally lighter conditions.