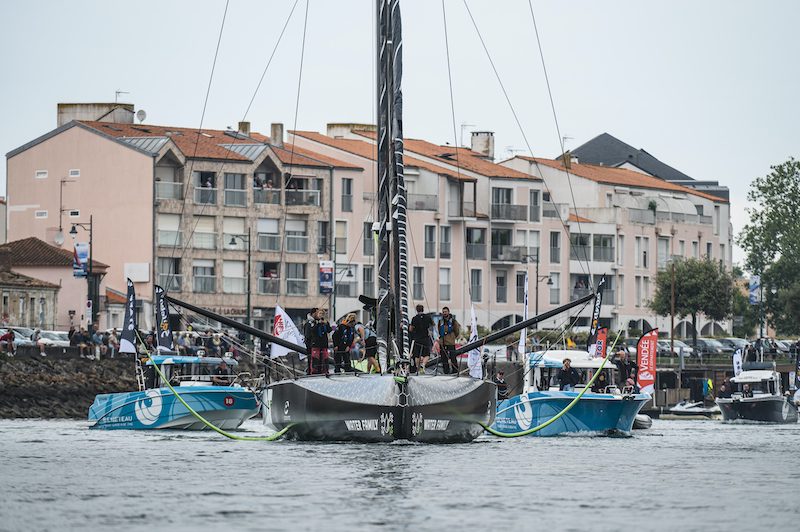 The local forecast promises good conditions with sunshine, some cloud and a north/north-easterly wind between eight and 12 knots. The 25 IMOCAs and their solo skippers will start leaving the dock and the famous Channel at 1330hrs local time.

This is the first time the IMOCA class has raced so far north, into the Arctic Circle on a course which will take them anti-clockwise round Iceland from the east.

Among the favourites are French skippers Jérémie Beyou (Charal) who won the inaugural race in July 2020. Then there is Charlie Dalin (Apivia) who was second in the Vendée Globe but broke the finish line first only to be displaced by Yannick Bestaven who was given time compensation for helping in the search and rescue of another skipper.

Conditions at the start
Weather forecasted for tomorrow in Les Sables d’Olonne promises ideal conditions although a slight risk of thunderstorms persists on the eve of the start. Sunshine, a relatively flat sea and a moderate northerly wind, between 9 and 14 knots are forecast.

The start for the 25 competitors will take place on a north-south line 1.5 miles off the Vendée coast. The reaching start should see the foiling boats off and flying from the line.

From the start of the race, the competitors will face a first obstacle, an anticyclonic ridge stretching from the Azores to Ireland.

“It will probably be in the second night, it will not be an easy time because we will hardly be able to sleep.” indicated Isabelle Joschke (MACSF) this morning, at the end of the weather briefing.

The first challenge for the sailors will therefore be to find the best route either going directly north, with a course close to Ireland, or working to the west, an option allowing them to maintain a better wind angle for the fast climb towards the north of Iceland.

Into the unknown
On the first race in July 2020, competitors rounded a waypoint to the south of Iceland, but did not round the island.

Jérémie Beyou (Charal), defending champion, says, “We are reckoning on ten days racing again, that gives us a good idea of how fast we should be going. Nobody has the experience of rounding Iceland or the far north, I think. It’s good to have at least the experience of the last race. Ten-day solo races, we don’t do a lot of during a cycle.

There is the Route du Rhum, it was the last, in 2018, apart from the first edition of the Vendée Arctique. So, this is a great challenge for the 25 IMOCA competitors. It is a race full of promise.”

Where to see the start: Along the channel to wave off the skippers, the Grande Plage and the embankment, Tanchet beach to Puits-d’Enfer, and on the other side towards the cote sauvage at La Chaume.

From a distance
A Live FR transmission will be broadcast on the YouTube and Facebook accounts of the Vendée Arctic. Maxime Cogny with commentate, accompanied by skippers Clarisse Crémer (Banque Populaire), Yoann Richomme (Paprec Arkéa), Maxime Sorel (V and B Monbana Mayenne) and Nicolas Troussel (Corum L’Épargne).

The EN Live video will be hosted by Andi Robertson and skipper Will Harris (Team Malizia) on the YouTube EN and Facebook EN accounts of the Vendée Arctic.