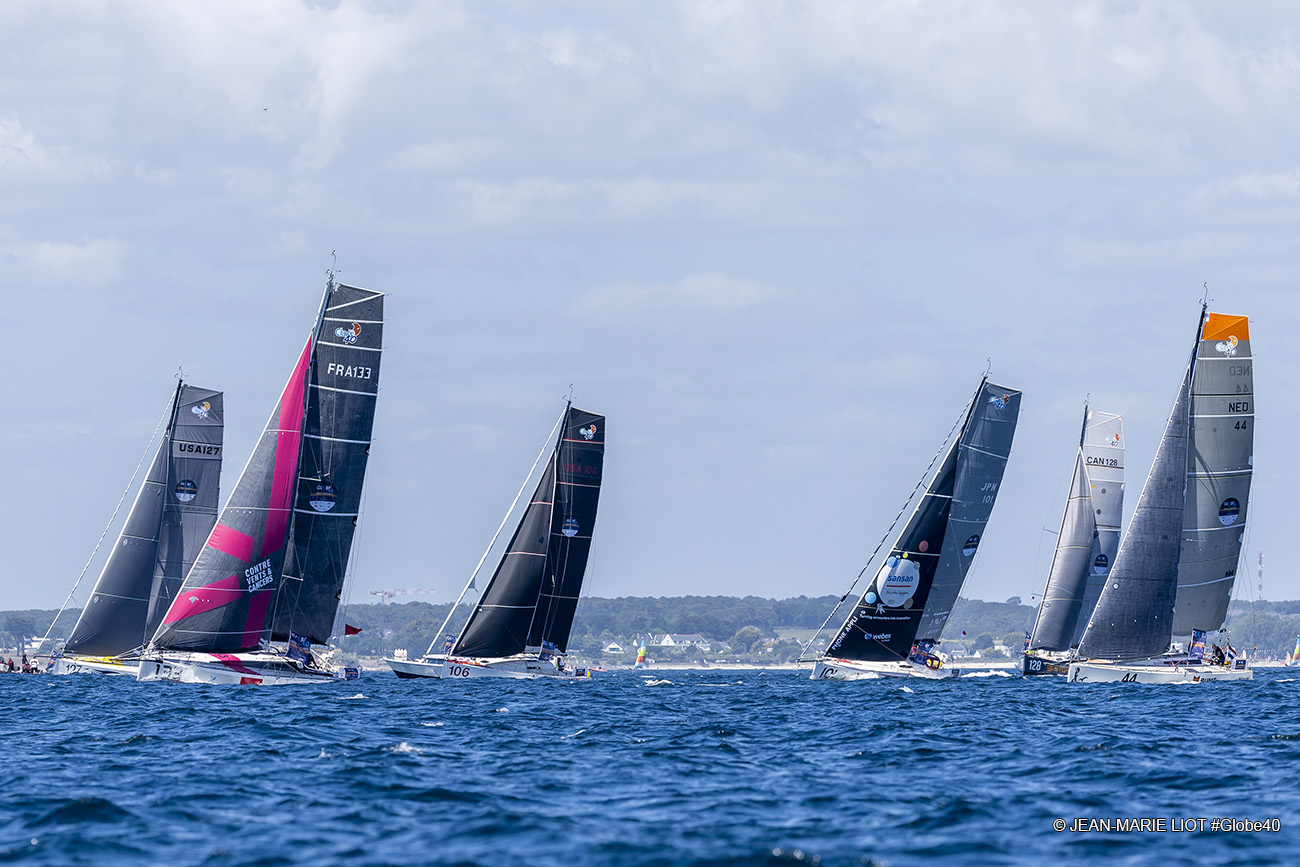 The Globe40 is underway

Connecting Lorient and Tangier, the prologue for the first edition of the Globe40 set sail on Saturday local time at 15:00 hours and with the start line set between the 5-port town in Brittany and the island of Groix, the Race Committee released skippers on a 7 nautical mile coastal course off Lorient Harbour, between the headlands of Le Talut and Pen Men.

Competitors got off to a clean start in perfect conditions, sunshine and around 15 knots of westerly wind. Once around the westernmost tip of the island, competitors launched onto the 920-mile warm-up sprint to the Moroccan city.

Mirroring the historic trade routes of the French East India Company, the course will give the crews a chance to get into their stride before the official start of ‘The Long Way’, which will lead the fleet to the four corners of the globe in competition format.

Emotions on the docks of Lorient La Base was palpable as the fleet cast off. It may well be but a warm-up race, but the next time skippers set foot on Breton soil again, they’ll have a sports adventure to their credit, having circumnavigated the globe under sail.

After bidding a fond farewell to the Citadel of Port-Louis, a building which houses the East India Company museum, the international fleet, comprising 18 sailors and eight nationalities, made for the start line off the mouth of Lorient.

It was the crew from Morocco, host of the upcoming official start, who were the first to distinguish themselves once the prologue got underway. Simon Boussikouk and Omar Bensenddik posted an excellent start, highlighting the racing talent of the former Vice-President of the Royal Moroccan Sailing Federation.

Relishing the fantastic conditions, the Japanese crew, led by Masa Suzuki, quickly stepped things up a gear to dominate the coastal course thanks to some impeccably clean tack changes.

An ideal start then for the Milai Around The World team, who must have had a real confidence boost to be at the front of the fleet before they rounded the western tip of Groix and set a course for Tangier.

Astern of them, the American and Dutch Class40s, Amhas and Sec Hayai, were evenly matched as they sped along the foot of the cliffs, putting on a show for the public out on the water, before heading offshore in second and third place respectively. A hotly contested start to proceedings and a taste of what awaits the sailors in the planetary battle set to colour this first edition of the race.

What an introduction then as, three years to the day since the Globe40 project was announced on 11 June 2019, this epic adventure finally takes to the water in Lorient, kicking off this innovative round the world race on Class40 monohulls.

Three years of relentless work was undertaken to bring this course to life and build a close relationship with the towns and cities hosting the various legs that make up the course and to forge strong links with the skippers from right around the world, who make up today’s fine fleet.

Three years where it has been necessary to overcome an unprecedented health crisis in a locked down world, and an ongoing international crisis. Three years to witness these experienced sailors head out to sea, bound for the Maghreb city in the Strait of Gibraltar, and the official start, which will see the Class40s doing battle across the many seas and oceans of the globe…