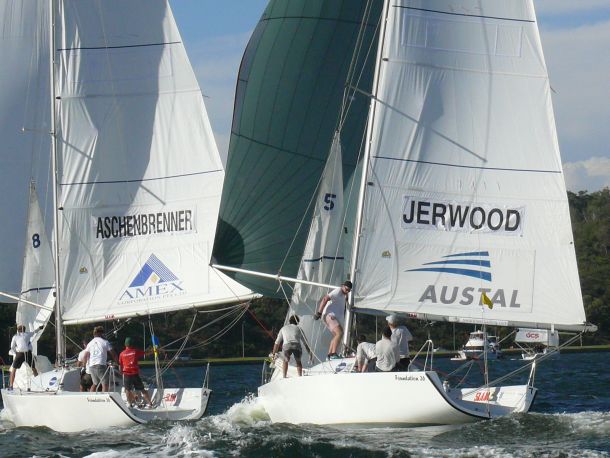 In the tightest event in the history of the Warren Jones Youth Regatta, three skippers from three nations share the top spot on the leader board at the end of the double round robin. Australia’s Matt Jerwood, Dane Joachim Aschenbrenner and Chris Steele from New Zealand are level with 18 wins each.

After a tie-break it was the local hero Matt Jerwood who came out as number one, ahead for Chris Steele, and the Dane third, with the winner afforded the privilege of first choice of opponent for the quarter-finals.

Chris Steele, who represents the Royal New Zealand Yacht Squadron, has been the quiet achiever of the second round robin, climbing the ladder steadily to take his place amongst the leaders. “I thought we sailed quite well in most of the races that we did,” commented the young Kiwi, “we had a tough one against Jerwood, we were in front but copped a penalty, the umpires saw it slightly differently from us and it was race over from there. Other than that it was a pretty clean day.”

There was also a scramble to claim the bottom places in the cut into the quarter-finals, with American Peter Holz and Japan’s Kohei Ichikawa just getting in, despite Holz having a half point penalty imposed for causing damage as a result of a collision.

Again the weather conditions were testing early in the day, with thunderstorms rolling around the Swan River causing big variations in wind speed and direction, but by the afternoon the fabled Fremantle Doctor sea breeze had filled in at a solid 12 to 15 knots, providing sparkling conditions and some very close racing.

There will be a tight schedule of races on Friday to complete the quarter-finals, semi-finals and finals. The regatta is being hosted by the Royal Perth Yacht Club, which this weekend celebrates its 150th anniversary, the event is managed by Swan River Sailing.

RESULTS: after 2 round robins