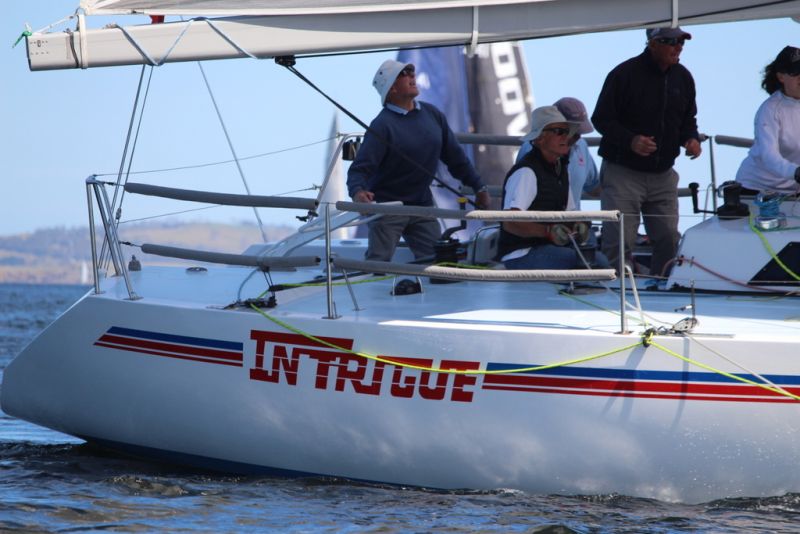 Doyen of the River Derwent yachting

Three generations of Hobart’s well-known sailing family, the Calverts, were aboard champion yacht Intrigue when she notched up yet another double rating win in the Combined Clubs Summer Pennant on the River Derwent on Saturday.

Sailing with owner/skipper Don Calvert where his son David and grandson Angus, son of the late Bruce Calvert, with Don giving 19-year-old Angus the helm to steer the Castro 40 across the finish line.

Intrigue, which has been racing on the Derwent since 1985, now has a commanding lead in Division 1 AMS, with six wins over the summer. In IRC, she is a close second to Doctor Who and in PHS, third overall to the consistent Doctor Who, skippered by Rod Jackman.

The 10 knot SE seabreeze and flat water on the Derwent suited Intrigue and she excelled in the long first beat to windward to Ralph’s Bay.

On the second beat, down to a mark off the Garrow Light, a tactical decision to take a tack out to the east rather than to the west and Nutgrove Beach paid dividends for Intrigue and others.

In the AMS category, Intrigue won from Matthew Keal’s Heatwave and Chris Sheehan’s Assagai while in IRC it was again Intrigue and Heatwave first and second, third place going to Ian Johnston’s Zephyr.

With one Summer Pennant race day to go, on Saturday, 30 March, Intrigue is on a net 9 points, with Jeff Cordell’s B&G Advantage on 22 points and Heatwave on 27 points in the Division 1 AMS category.

Doctor Who discarded her sixth place in IRC yesterday and continues to head the IRC pointscore with 14 points. Intrigue has a net 18 points, Heatwave 20 points.

In the PHS category, Doctor Who placed 10th yesterday and has discarded this race to be on a net 20 points. Heatwave, which won the Division PHS category yesterday, is on 26 points, Intrigue just one point behind.

In Division 2, Justin Barr was back to handicap winning form in Rumbeat after his success in the Dragon one-design class at the Crown Series Bellerive Regatta.

Young Lion scored her seventh win in eight races in the IRC category, from Footloose and Groove (Will Justo), and has a net 7 points, with Footloose on 14 and Moonshadow (Anthony Ellis) on 22 points.

In Division 3 PHS, Lock on Wood (Ron Akhurst) won yesterday from Serica (Charles Peacock) and Footloose, which heads the pointscore on 21 points from Serica, 30 points, and Groove (Wil Justo) and Trouble (Mark Millhouse) both on 31 points.