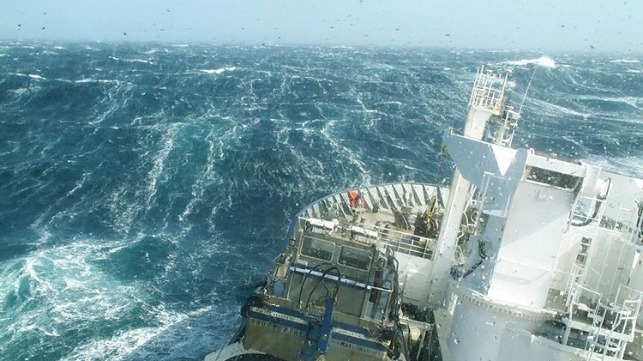 A research vessel ploughs through the waves

Sailors call the latitudes between 40 and 50 degrees south of the equator the Roaring Forties.

During the Age of Sail (circa 15th  to 19th centuries), these strong prevailing winds propelled ships across the Pacific, often at breakneck speed. Nevertheless, sailing west into heavy seas and strong headwinds could take weeks, especially around Cape Horn at the southern tip of South America, making it one of the most treacherous sailing passages in the world.

The Roaring Forties take shape as warm air near the equator rises and moves toward the poles. Warm air moving poleward (on both sides of the equator) is the result of nature trying to reduce the temperature difference between the equator and at the poles created by uneven heating from the sun.

This process sets up global circulation cells, which are mainly responsible for global-scale wind patterns. The air descends back to Earth’s surface at about 30 degrees’ latitude north and south of the equator. This is known as the high-pressure subtropical ridge, also known as the horse latitudes. Here, as the temperature gradient decreases, air is deflected toward the poles by the Earth’s rotation, causing strong westerly and prevailing winds at approximately 40 degrees. These winds are the Roaring Forties.

The Roaring Forties in the Northern Hemisphere don’t pack the same punch that they do in the Southern Hemisphere. This is because the large land masses of North America, Europe, and Asia obstruct the airstream, whereas, in the southern hemisphere, there is less land to break the wind in South America, Australia, and New Zealand.