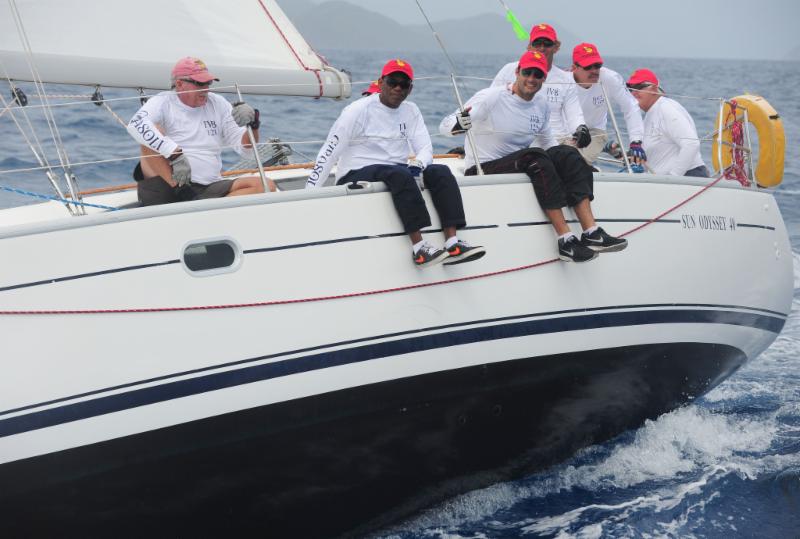 19/03/2019
Mount Gay Rum was one of the original sponsors of the BVI Spring Regatta (BVISR) having first partnered with the popular Caribbean regatta in 1972 through its distributor, Road Town Wholesale. The brand, synonymous with sailing, has always been an active partner at the Regatta Village at Nanny Cay, but this year has boosted its support of the regatta, now in its 48th year. In addition to their Gold Sponsorship, Mount Gay Rum will sponsor the first day of the Regatta on Friday March 29th and is also the Official rum of the BVI Spring Regatta & Sailing Festival; to which Regatta Director, Judy Petz is highly delighted:
“The strength of the regatta can be determined by the quality of the partnerships developed with the sponsors involved and we are really thrilled to confirm Mount Gay Rum as sponsor of the first day of the BVI Spring Regatta, and as the official rum. The Mount Gay Red Cap will be seen on every race participant, both on and off the water, and in the Regatta Village, the Mount Gay Rum Bar is certain to be a very popular venue after racing. Mount Gay Rum's support since the inception of the Regatta has helped make the BVISR the success it is today.”
Although a faded Mount Gay Red Cap is tops for savvy sailors as a status symbol amongst crews, competitors in this year's BVI Spring Regatta & Sailing Festival will receive the infamous Red Cap, emblazoned with the logo of Mount Gay Rum – which is only available to a small number of racers in the world's top sailing regattas. You can only get one if you race and so it has become the most coveted item and an icon to all sailors since it appeared on the racing scene in 1987.
Following the BVI Sailing Festival*, three days of competitive racing will kick off at 1000 on Friday March 29, with the new Mount Gay Race Day where around 90 boats and sailors from 20 countries will test their mettle on some of the world's best waters for sailing.
Following action out on the race course, teams will celebrate at the Mount Gay Race Day Awards in the Regatta Village, where sailors will enjoy their favourite Mount Gay tipple, including a Black and Stormy made with Mount Gay Black Barrel at the Official Mount Gay Rum Bar. Those who don a Red Cap at the awards party will also be rewarded with a free welcome Mount Gay Rum smoothie (for one hour only) following the awards ceremony and the party will be in full swing, dancing on the beach to Final Faze, as well as fun prizes and games for all to enjoy as the first day of the BVI Spring Regatta concludes. Friday will also be offering promotions such as 'spin the wheel' with a chance to win special Mount Gay prizes.
“Mount Gay Rum, a long-standing sponsor of the BVI Spring Regatta is looking to enhance the rum experience for those racing and participating in the event. In addition to presenting sailors with the famous Mount Gay Red Cap, we have created a fun experience for everyone. This year we are excited to open the Spring Regatta with the Mount Gay Race Day on Friday, with special drinks, awards and prizes at the Regatta Village,” said Colin Campbell, Brand Manager, Road Town Wholesale.
* Round Tortola Race for the Nanny Cay Cup (Tuesday March 26), the Scrub Island Invitational (Wednesday March 27) and Lay Day, plus the BVI Spring Regatta Skipper's Meeting and Welcome Party on Thursday March 28.