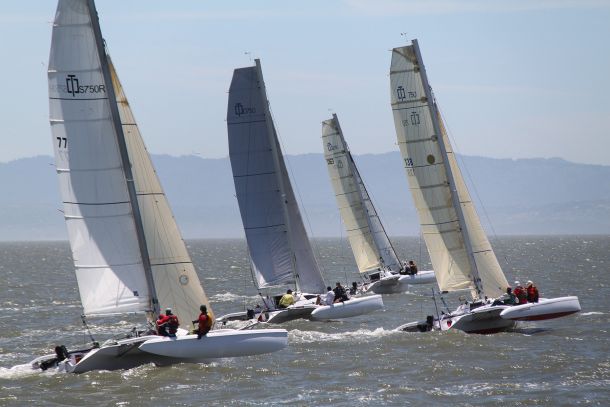 16/07/2015
The 2015 Multihull Solutions Phuket Regatta has wrapped up after three days of action on and off the water.
Despite consistently strong wind gusts and rain periods that reduced the course to within Ao Chalong Bay, the contingent of 16 multihulls rose to the challenge from 9-12 July and produced extremely competitive performances with some overall positions divided by mere seconds.
Sixteen boats originally entered the regatta, but intense wind bouts played havoc with the field and forced four to withdraw early in the racing.
Alan Carwardine's 11.8m Asia Catamarans Hurricane and Mick Coleman's Java staged a mighty battle in the Racing Multis (OMR) division over the three days with the lead consistently switching until Hurricane finally managed to gain victory in the final day’s race.  Kirill Stashevskiy's Stealth 13 Gokova Phuket Galeforce, Henry Kaye's Seacart 26 Sweet Chariot, Grenville Fordham's Image Asia Nina and David Liddell's new Stealth 14m WOW provided added excitement further back in the field as they tackled the weather and technical problems to enthusiastically fight for minor placings.
Action was equally intense between three Firefly 850s in the Sports Division with Neil Ayre's Sports Advanced Racing Team taking on John Newnham's Twin Sharks, Hans Rahmann's Firefly 850 Voodoo and George Eddings’ Blue Nose for some furious competition that pushed the boats to their limits. The gusts played havoc with the division and the vessels scrambled to overcome rigging issues and produce three days of tight racing, with Twin Sharks ultimately recording five wins in a row to take the title.
The Open Multihull Class was battered on Day One, resulting in the withdrawl of two Corsair Pulse 600 trimarans and a decision was subsequently made to use the regatta as an exhibition event for the Corsair class. Regardless, Bob Garner's Cosair SuDu Red and Russia’s Tatiana Bogatyzova's Lagoon 380 Star Fruit didn’t let the losses dampen their competitive spirit and waged a spectacular first race. When SuDu Red received an official Racing Multihull (OMR) rating and was bumped up into the Racing class, Bogatyzova's Star Fruit was left to go it alone in high spirits for the remainder of the regatta in the Open Multihull Class.
Over the three nights, the 120 sailors and supporters revived their spirits with amazing social events, including a free beer evening sponsored by Corsair and a sumptuous final night’s buffet at the Ao Chalong Yacht Club.
Despite being somewhat battered at the finish, the crews were thrilled with the entire event and all swore to return for the 2016 regatta. The crew of Twin Sharks declared “it was the best regatta we’ve ever sailed,” while the Hurricane crew stated “it was the closest racing we’ve ever had with three races separated by less than five seconds.”
Multihull Solutions Asia general manager Andrew de Bruin said the company was delighted with the professionalism of the event and the enthusiastic spirit demonstrated by every yacht.
“It is great to be a part of the revival in multihull racing in Asia, and we look forward to continuing our sponsorship for an even bigger and better event next year,” Andrew said.
Plans are already underway for the 2016 Multihull Solutions Phuket Regatta, with organisers considering the addition of a “white sails-only” (non-spinnaker division).
The regatta is arguably the best value event of its kind, with Early Bird entries costing only 3,500 Thai Baht per boat including skipper ($120 AUD) or 1,800 Thai Baht per crew member ($70 AUD).
Further information and video footage of the Multihull Solutions Phuket Regatta can be found at https://youtu.be/HolneA48mkQ, or on the ACYC website at http://acyc.asia/regattas/multihull-regatta/. Those interested in joining the 2016 event may also contact Multihull Solutions on +66 8 1894 1530, emailing info@multihullsolutions.asia or visiting the website at www.multihullsolutions.com.au/events/phuket-multihull-regatta