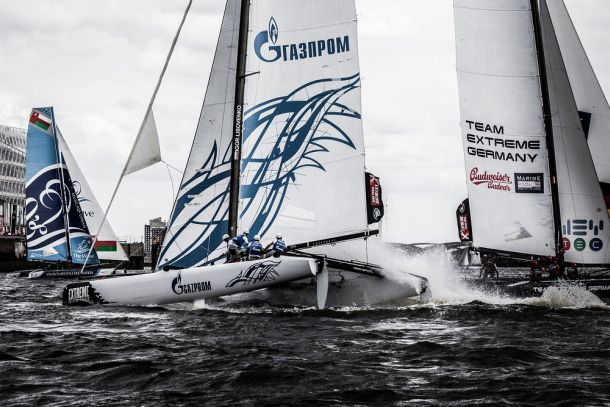 On the opening day of the Extreme Sailing Series Act 5, Hamburg presented by Land Rover the teams meant business with The Wave, Muscat and SAP Extreme Sailing Team taking the lion’s share of the podiums. But it was Gazprom Team Russia that was the stand out performer, taking three bullets in the final three races.

With the breeze blowing directly against the current from the west, the teams were treated to a fluctuating 10 knots, flat water and a straight windward-leeward drag race against the tide on the narrow river racetrack. The racing offered a great spectacle for the fans as the boats tacked within metres of the shore, trying to make the most of every inch of the 300m race track.

The Wave, Muscat skippered by Leigh McMillan, showed their dominance at the start of the day posting a 2,1,2 scoreline straight out of the blocks. But the fleet were not about to let them run away with the lead and a series of mid-fleet finishes in the second half of the day saw them only just top the overnight leader board on 57 points. Two points adrift on 55, SAP Extreme Sailing Team got to grips with the challenges of the new venue finishing with two race wins and two seconds.

Rounding up the leaderboard, Gazprom Team Russia came into the Act confident that the strong tidal conditions and tight racecourse would suite Kiwi helm Phil Robertson’s style of racing. As he tweeted before the action got underway: “The plan is to smash it.”

Tipped by Race Director Phil Lawrence as the ones to watch after yesterday’s practice race, the team didn’t disappoint. After a slow start they stormed the final three races to take convincing wins in each, rounding up the overnight leaderboard in third place, one point behind SAP Extreme Sailing Team in second.

“Racing in Hamburg is extremely difficult. You’ve got big walls either side of the course which get higher and higher as the tide goes out. This means extremely shifty winds and nine boats on a very small racecourse, which is hard,” explained Robertson after racing.

“The starts are super-important as is trying to get away from everyone else and finding clean air. We started off fairly well but it took a while to get into the swing of things.

The smallest mistakes really show in this competitive fleet. We had a horrible middle section of races when we just got caught up in the pack, and then finished really strong.”

With nine points separating third place from the chasing pack, Red Bull Sailing Team in fourth, Team Turks powered by Kaya Ropes in fifth and Oman Air in sixth each had moments at the front of the fleet but struggled with the consistency needed to challenge for the podium.