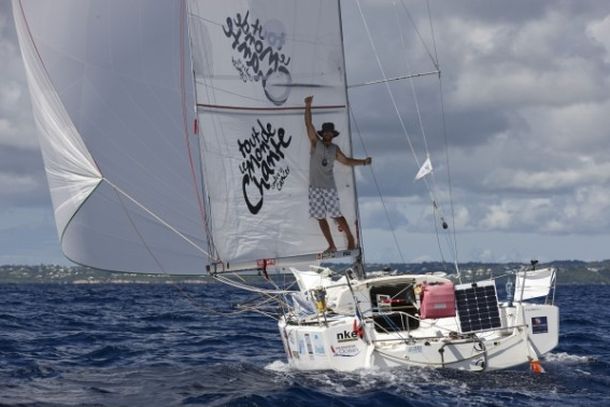 The final completion of entries and registration to compete in the Mini Transat îles de Guadeloupe took place on Sunday 19th July, exactly two months before the start of the race. Whilst not completely oversubscribed, entries for this edition are of a very high standard with a number of the solo sailors committed to training regularly for the last two years and who have really honed their skills

This is when the dream becomes reality, where it was decided that there would be no turning back. Confirming their registration in the Mini Transat îles de Guadeloupe, by paying their entry, the solo sailors know they are committed and that this will lead them to be on the start line in Douarnenez next 19th of September.

Two months to be ready

However, not everything is completely ready for a number of competitors; Starting with the key thing to compete, a decent budget that will cover most of the costs of the race. It is not about trying to get paid, but more a matter of covering costs in order to participate in the Mini Transat Iles de Guadeloupe to ensure that it does not in turn becoming a cross to bear with years of paying debt off to banks.

To achieve the Mini sailors then become commercial and sponsorship agents, all looking for funding. Many try and get crowd funded, look for regional intest (easier for those from a more remote area than from the busy Finisterre where many of the sailors are originally from). Some try and find a humanitarian cause and many use their friends and family networks to raise funding. Every little bit helps to not be too much in debt. The search is exhausting, as has been the case for Damien Cloarec, one of the race favorites, who finally threw in the towel, after failing to find a partner to accompany him.

For a minority, being at the start will still depend on qualification. This is the case of the Swiss sailor Simon Koster who launched his boat late this year and so his participation will depend on finishing the Transgascogne, the last event of the season. Some sailors still have to complete the 1000 qualification miles. A formality that normally takes a sailor a week or so to complete. This was exactly the case for Oliver Taillard, who finished his qualifying miles this morning in the Trinité sur Mer.

Entries loyal to the Mini Spirit

28 prototypes and 46 production boats, some favourites designed to win, other sailors looking for the adventure, but the melting-pot of the Mini always works like this. For this 2015 Mini Transat îles de Guadeloupe, 70 men and 4 women have signed up, representing 14 different nationalities. The oldest sailor, Carlos Lizancos will be 56 years old at the start and Quentin Vlamynck, the youngest, will be 22 years old.

The island of Guadeloupe will be represented by Carl Chipotel, who has moved this summer to Britain to work on his training. Rodolphe Victorri has found an unusual way of training; he has sailed his Nacira 6’50 from his native Saint-Pierre et Miquelon, near Canada, to Douarnenez in France. A Chinese sailor, a Russian, an Estonian and an Australian all make the fleet a very international one.

74 entries is less than the previous edition, but the difficult conditions of 2013 have without doubt made some candidates re consider and know that crossing the Atlantic can done done be lightly. It is for this very reason that many of the sailors have increased the amount of time spent on the water to prepare and have entered other races as preparation. A smaller fleet, but certainly one better prepared, the Mini Transat îles de Guadeloupe is still the only race that gathers so many sailors in one class.