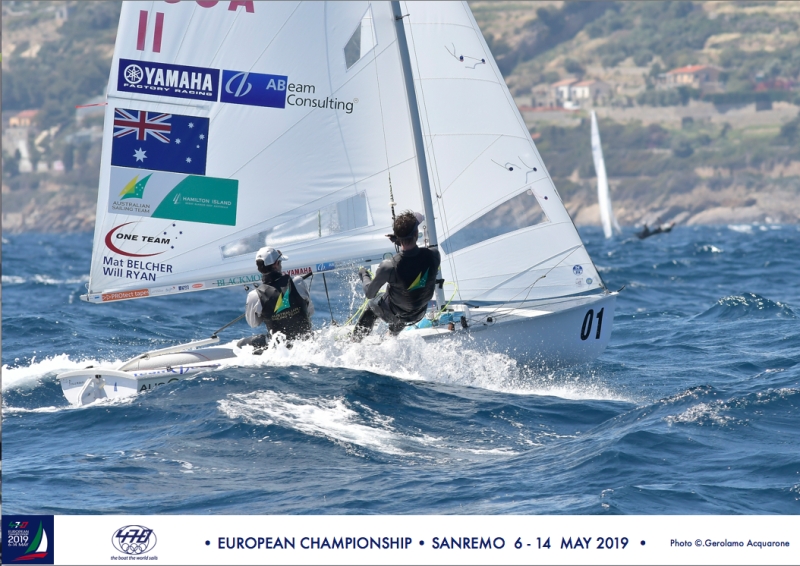 Mat Belcher and Will Ryan at the 470 Europeans.

The gulf of Sanremo has lived up to its fame, delivering perfect conditions for the opening day of the 470 Europeans, organised by local Yacht Club Sanremo and Marina degli Aregai, in co-operation with the national and international 470 class.

Blue skies, a warm sun and an easterly exceeding 15 knots have welcomed the participating teams in a sailing location that confirms to be among the world’s best.

The crews, 70 men split in two groups and 40 women, reached the race area on time for a noon start, but were forced to wait a bit longer offshore for the wind to set in direction and intensity. After nearly two hours, the international Race Committee was able to fire the Europeans’ first signal for the women’s fleet, shortly followed by the two men’s groups. The first start was given under black flag for everyone, and unfortunately several crews were found over the line and disqualified.

The ideal sailing conditions enabled to wrap three races, shaping a first, very preliminary scoreboard for both the Europeans and the Open Championship.

UK’s Hannah Mills and Eilidh McIntyre, scored two wins that put them on top of the Women’s table, in front of Israel’s Gil Cohen and Non Lasry, that grabbed a victory in the second race, with Camille Lecointre and Aloise Retornaz close the day in third overall. It’s interesting to note that the first ten female crews all come from Europe, whilst the first non-European team is Australia’s Nia Jeerwood and Monique Devries. The usually strong duo from China, Mengxi Wei and Haiyan Gao, didn’t look particularly at ease in today’s strong wind and are in fifteenth position.

In the Men’s fleet, Australian stars Mathew Belcher and Will Ryan bagged a clean score, with three bullets. But behind them the Europeans were in the spotlight with Austria’s David Bargher and Lukas Mahr leading on Spaniards Jordi Xammar and Nicolas Rodriguez and Panagiotis Mantis teaming with Pavlos Kagialis from Greece. The reigning European champions Anton Dahlberg and Fredrik Bergstrom from Sweden close the day in sixth place overall.

The weather forecast for Day 2 is for a south-westerly wind of around 8 to 10 knots in the morning, progressively increasing in the pm hours. First starting signal is scheduled for 11:00, and the Race Committee intends to have up to three races for the women and two races for the men.

The 470 Europeans consist of a series of fleet races and a final medal race, if more than five qualifying races have been completed, for the top 10 teams in each fleet. The racing will be on windward/leeward or trapezoid courses. The championship has an open format, that means that non-Europeans crews can compete but cannot run for the title.