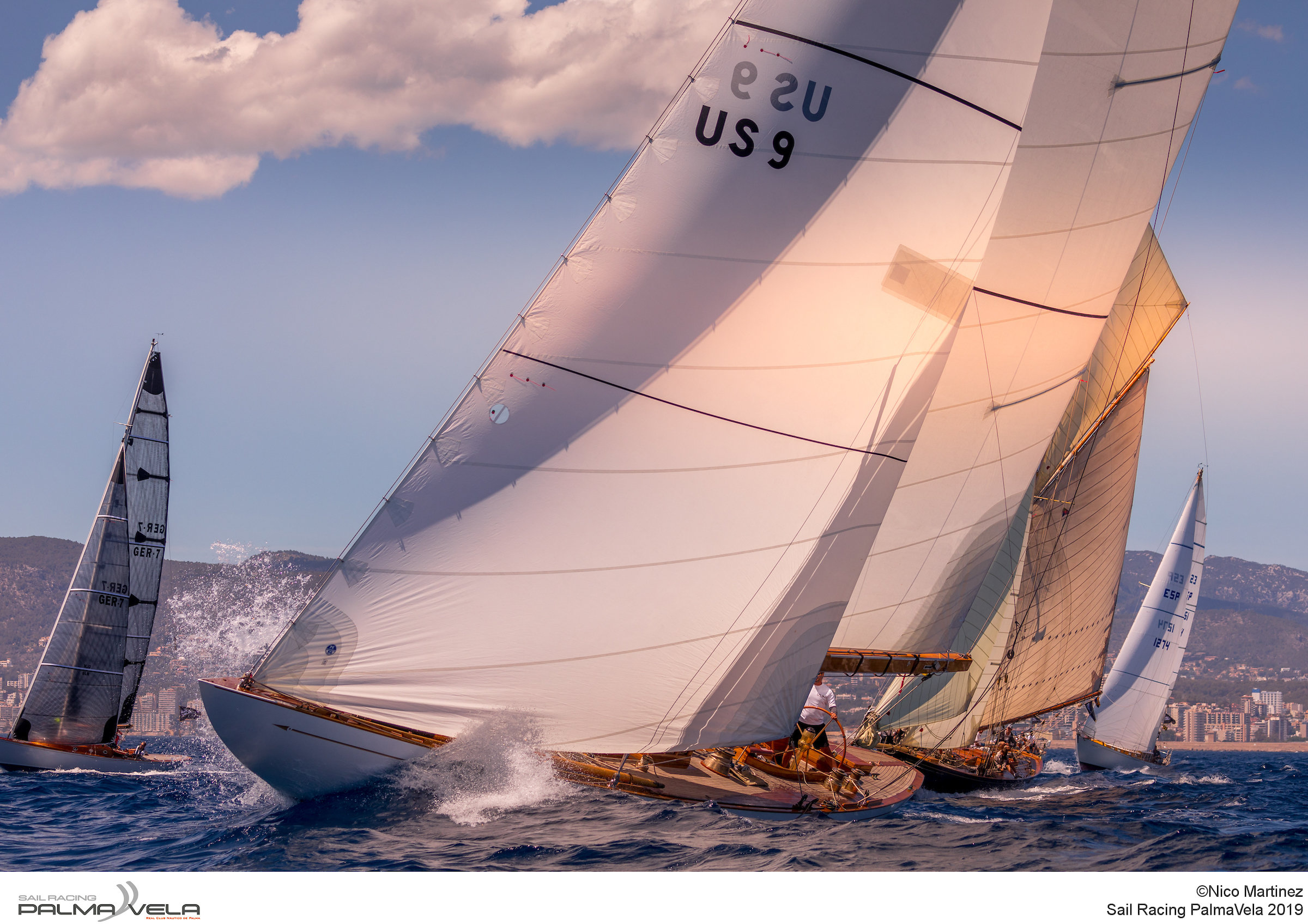 On the second day of the 16th Sail Racing PalmaVela, the fleet on the Bay of Palma grew to 110 boats, as the ORC and One Design classes started their racing program in the curtain raiser for the Mediterranean mixed classes regatta season.

There may be just two big boats duking it out in the IRC class; Sir Lindsay Owen Jones Wally Cento Magic Carpet 3, and the Reichel Pugh 83 foot one- off Vera, with Bouwe Bekking as strategist.

The 10-strong TP52 fleet is in full dress rehearsal mode, preparing for the start of the 52 Super Series in Mahon, Menorca, next weekend. According to many sailors in the fleet the high octane tight racing on the Bay of Palma over these four days is proving every bit as close to what will be experienced at the Menorca 52 Super Series Sailing Week.

After four races, Tina Plattner and crew on Phoenix, winners of the first race yesterday, hold a small lead at the top of the standings.

Phoenix sailed a 4,1 today to keep the 52 Super Series champions Quantum Racing, which is steered by Ed Baird who was tactician on Phoenix last year and who very much mentored Plattner through her first steps in the class a couple of years ago. Quantum Racing could not better Phoenix scores for the day, gaining a first and fourth.

On a typical Bay of Palma early season sea breeze day starting and the first shift were key and Phoenix started well both times.

Phoenix tactician is Adrian ‘Ado’ Stead, long time TP52 ace who has sailed on many different teams including world championship wins with Ran Racing and Quantum Racing. He combines with Italian Michel Ivaldi as strategist on Phoenix, reprising a partnership from Bronenosec two years ago.

Ivaldi commented after racing. “We have been here for a while and we know we have all the pieces in place to do well. The boat is going very fast. We are quite complete in terms of crew wise, manoeuvres we are very good, boat speed, driving, it is all good.”

He is one who believes that racing here closely mirrors his expectations of the first days of the 2019 Super Series season:

“I think this is very close to what we will see in Mahon. Everybody is using good sails, pretty close to their final configuration. Racing is incredibly close and it is often down to the shift at the top mark.”

Ivaldi, also a some-time Quantum Racing alumni adds, “We are starting well. We got the first shift in both races. We have been practicing starts but you can never have done enough, you have to keep going, keep driving. And Ado is putting the boat in the right spots, we have had very good final launches and the race becomes a little easier when you get off the line well.”

In Race 3, the first of today, new tactician Cameron Appleton scored his first win with Quantum Racing. They started smartly and escaped to win.

Appleton said this morning, “I think we’re ahead of where we thought we would be. There’s a lot of room for improvement. That’s the beauty of the sport; you never stop learning. I know in my role, I’ll get better and better each day. I can improve by painting the picture better and what communication keys are important and just simplifying things as much as possible.”

“Quantum has gone for a new film, which we are using which has stepped up the whole level, the smoothness and the fairness of the shapes. Brett (Jones, designer) has been quietly working away in the background.

“We’re all looking forwards to Day 1 of the 52 Super Series, but this is a pretty serious dress rehearsal here, everyone is putting in a big effort, everyone is at a very high level, probably the highest yet.”

Andy Soriano’s Alegre and Harm Muller Spreer’s Platoon are tied on 17 points, both sharing rights to third place. Platoon had to take a penalty as they pushed the risk margin in the first race and finished ninth but resumed normal service in Race 4 of the series with a second. Their Víctor Mariño explained:

“We picked the wrong side of the course and then on the run we took a big risk, trying to tack to leeward of the fleet and it did not work we got in a spot and took a penalty that cost us.

“We are very happy with the boat speed. We have changed some small things at the back of the boat for the runners, so we are finding the way to do things at 100%. These are little things which change the way to do the manoeuvres; this is the regatta for that.”

Sled did not race today after a crewman was medivac’d ashore due to a medical emergency. He was taken to hospital and is in a comfortable condition undergoing tests and further observation. It is understood Sled will race tomorrow, Saturday.

The RORC’s CEO Eddie Warden Owen leads the Dragon class on Mercury after two first places and a fourth,

Owen said, “It was very shifty today. It started with 14 knots and I was a little bit nervous, but it was really good fun. I did part of the Dragon circuit three years ago and then we stopped. Now we rented this boat from the 8th Dimension in Portugal. It's great to be back in Palma and racing. I love being here: you go out there and you go 'wow, this is brilliant.”