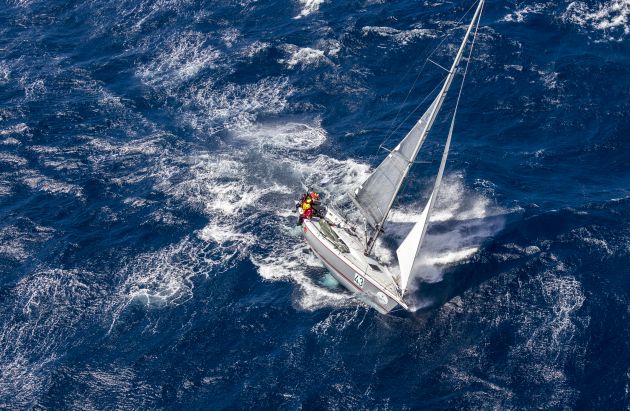 After a decade of, by Rolex Sydney-Hobart standards, comparatively benign weather the race has returned with a vengeance to its classic persona.

The mean southerly that made life hell for sailors off the NSW south coast last night is at last abating, but it has taken a huge toll on the fleet.

Before the southerly buster kicked in there were five boats out of the race, now there are 29, an attrition rate of 27 per cent and the race still has at least another two days to run.

The latest casualties include Peter Harburg’s Queensland Volvo 70 Black Jack, which returned to Jervis Bay to transfer an injured crew member with a suspected fractured leg. The crew member s being transferred by ambulance to the nearby naval base for medical assistance.

The retirees at 2130 last night were:

It’s been a tough race on the digital front as well. The race’s Yacht Tracker system was affected by a global outage of a major data centre, the victim of a “sustained distributed denial of service attack” on their systems. It was large enough that their entire London data centre was affected, The yacht race became a wounded innocent bystander.

Meanwhile, the race goes on and even the frontrunners have taken a pretty solid beating from this classic, wild Hobart. Comanche and Rambler are licking their wounds, each having suffered damage to their starboard daggerboards and, in Comanche’s case a rudder.

Update from Mysailing at 6am EDST

Still on her favoured port tack, Comanche maintains a 14.2nm lead over Rambler, which in turn is 34.3nm ahead of Ragamuffin 100. The leaders are in the lee of Tasmania, with Comanche's position given as 58nm SE of St Helen's Point. That gives her a distance of 146.6nm to the finish.

However, all interest now turns to the next tack. Both of the leaders will have difficulty on Starboard owing to the damage they have sustained and this will almost certainly mean they are unable to point as high as normal. The winds are currently from the south-west, meaning a tack on to Starboard will be required in the next few hours. We will watch to see whether Ragamuffin starts to make inroads. The leaders are all sailing at between 10 and 11 knots currently.

You can check out the tracker here and also get regular updates from our Facebook page.

The race for handicap honours has swung back in the favour of the smaller boats over night. Phil Bennett's John King designed King Billy leads Courrier Leon which is just 10.8m LOA. They are followed by defending Tattersall's Cup champion Wild Rose, the 13.1m Bruce Farr design owned by Roger Hickman. Mayfair, a Beneteau First 40 is next before the first of the big boats, Rambler, in fifth.

Rambler obviously leads Division 0 ahead of Comanche and Maserati, meaning there is no Australian boat in the top three of the big boy's division. Chinese Whisper, Ragamuffin and Ichi Ban make up the remainder of this fleet.

In Division 1 Syd Fischer's other entry Ragamuffin 52, helmed by his grandson Brenton Fischer, leads ahead of another TP52, Paul Clitheroe's Balance, perhaps making Matt Allen wish he had chosen to race his TP52 instead of the Carkeek 60. Jason Ward's Mills 45 Concubine from South Australia is in third place.

Division 2 is headed by John Patterson's Rush, with the first of the old Clipper boats, CV5 in second. This will not please her highly-competitive owner Sir Robin Knox-Johnston who is navigating CV10, which is down in 17th place. A British boat, Discoverer of Hornet, is in third.

This division includes the newer versions of the Clipper fleet which are racing around the world with amateur crews. Sadly, local skipper Wendy Tuck has lost her lead and dropped back to 18th, one place behind “the boss”. The first of the new Clipper boats is Clipper Telemed+ in 4th, followed by Derry-Londonderry-Doire in 7th and Garmin in 8th.

Division 3 contains many of the mid-size production boats. It is led by the Beneteau 45 Black Sheep, followed by another Beneteau, the 47.7 Imagination and the French Archambault 13 Teasing Machine.

The wind forecast from Seabreeze shows strong south-westerlies of 20 to 25 knots this morning, easing at around 9am and dropping away to frustrating 6-8 knots this afternoon.

It is going to be a long day for the crews who have been battered by the southerlies for two days. But it may give the chance to make some repairs and get some sleep.